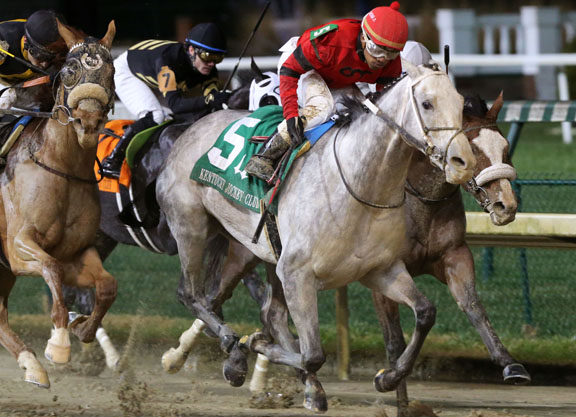 Four colts from the Steve Asmussen barn, three of which have big chances, give the Hall of Fame trainer a strong hand in Friday’s Smarty Jones S., the opening-day feature at Oaklawn Park. The two-turn, one-mile test is the first of a four-race GI Kentucky Derby prep series at the Hot Springs oval and promises 10 Derby qualifying points to the winner.

Given a slight nod on the morning line at 5-2 is Ed and Susie Orr’s Silver Prospector (Declaration of War). Failing to make an impact in three turf tries to open his career, the gray flipped a switch when moved to the main track Oct. 13 at Keeneland, graduating with a 91 Beyer, 29 points higher than his top on turf. Third in the Street Sense S. Oct. 27 at Churchill, the $190,000 OBS April buy rallied to upset heavily-favored Tiz the Law (Constitution) in the GII Kentucky Jockey Club S. Nov. 30 in Louisville.

The narrow second choice at 3-1 is Cheyenne Stables, Grandview Equine and LNJ Foxwoods’ ‘TDN Rising Star’ Shoplifted (Into Mischief). Bursting onto the scene with an eye-catching debut success July 27 at Saratoga, the $800,000 Fasig-Tipton Gulfstream purchase was a distant runner-up to stablemate Basin (Liam’s Map) in the GI Runhappy Hopeful S. Sept. 2 at the Spa before disappointing when off the board in the GI American Pharoah S. and GI TVG Breeders’ Cup Juvenile. The bay bounced back when overcoming a wide journey to narrowly capture the Remington Springboard Mile S. last out Dec. 15. Shoplifted will be ridden by Tyler Gaffalione for the first time with Santana opting to stick with Silver Prospector.

Mike McCarty’s improving Gold Street (Street Boss) gives Asmussen a third contender while stretching out beyond six furlongs for the first time. Ninth debuting in an Ellis off-the-turf spot Aug. 24, the $150,000 Keeneland September graduate was runner-up Sept. 20 at Churchill and Oct. 19 at Keeneland before breaking through by seven lengths in the slop beneath the Twin Spires Nov. 23. Stepping into stakes company Dec. 21 at Fair Grounds, the bay caught another sloppy track and scored by 3 1/2 lengths in the Sugar Bowl S. Martin Garcia will ride in place of Santana. Calumet Farm’s Jungle Runner (Candy Ride {Arg}) rounds out the Asmussen quartet and would be a surprise after finishing 14 lengths behind Shoplifted at Remington.

August Dawn Farm’s Three Technique (Mr Speaker) adds some East Coast flavor for trainer Jeremiah Englehart, housing a string at Oaklawn for the first time this winter. Runner-up twice to start his career, including to the aforementioned Basin July 21 at Saratoga, the $180,000 Fasig-Tipton July pickup earned his ‘TDN Rising Star’ badge with a blowout maiden win at the Spa Aug. 31. Given a brief break, he scored an easy allowance victory at 15 cents on the dollar Nov. 20 at Aqueduct.

Rockingham Ranch’s Nucky (Ghostzapper), a 35-1 upsetter of the GI Runhappy Del Mar Futurity Sept. 2, tries to bounce back after beating one horse combined in his subsequent two starts.