Asmussen Cleared of Most Serious Allegations 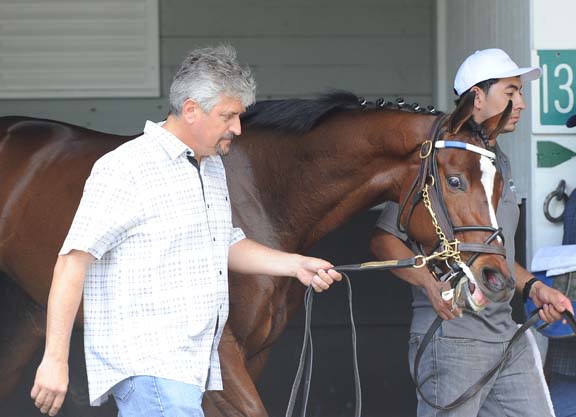 The actions are a direct result of complaints based on an undercover exposé orchestrated by the People for the Ethical Treatment of Animals (PETA), which used, in part, surreptitious recordings of workers in Asmussen’s stable during the 2013 Saratoga Race Course meet.

The report, which can be accessed here, cleared Asmussen and other involved parties of 10 of 14 specific “unfounded” allegations. But even among the four allegations that were “sustained,” the NYSGC conclusions left room for subjective interpretation.

For example, the NYSGC report stated that:

1) Partially completed furosemide eligibility forms were deemed to be not rules violations but “a deficiency in the regulatory process.”

2) Asmussen’s general practice of feeding the metabolism-boosting supplement Thyroxine to every horse in the stable was ruled “questionable,” but most of the horses were given a dose that was “actually below the minimum label recommendation of 35 mg daily for Thyroxine Powder.”

3) Although at least 45 violations of feeding Thyroxine within 48 hours of raceday occurred, they were deemed “very unlikely to have affected the health or racing ability of the horses.”

4) A finding that “drugs were administered without evidence of medical necessity” was accompanied by an explanation that in lieu of written documentation, “the prescribing veterinarian stated that no horse was treated with thyroxine unless a diagnosis of hypothyroidism confirmed by blood testing had been made.”

In response to the ruling, Asmussen’s attorney, Clark Brewster, told TDN that before Asmussen would even consider appealing the fine, it needs to be established whether or not the NYSGC followed the proper steps in issuing it.

“You only appeal a matter that you’ve been a party to,” Brewster explained. “We’re not a party to this. It was a third-party complaint, [initiated by] PETA….Mr. Asmussen has never been accused by any racing officials or given any due process to defend any accusations. I don’t know how they could impose a fine until he has an opportunity to understand what the charge is, and respond to it and offer evidence in defense of it.”

Brewster said the distinction about due process is important. He acknowledged that Asmussen attempted to be “totally transparent” and to comply fully with requests for interviews, training logs, and veterinary records after PETA “complained to like 18 different agencies.” But at no point in the past year and a half, Brewster said, was Asmussen informed that he had broken a NYSGC racing rule until the fine was made public on Nov. 23.

In addition, Brewster said, it needs to be established whether the administration of a thyroid supplement counts as a “drug.”

“Here’s the critical issue,’ Brewster said. “New York’s rule is you cannot give any drug within 48 hours [of a race] with the exception of permitted medications [topical anti-biotics and furosemide]. Thyroxine is a hormone, just like Regimate is a hormone. Nobody has ever said you couldn’t give Thyroxine. I mean this is the first ever, and I defy you [to prove], if somebody else has ever been fined for giving a hormone supplement, I’m not aware of it. So do they apply the same rule to Regimate and other hormone supplements? I don’t think so. No horse in Steve’s barn in New York, for sure, was ever given a thyroid hormone supplement without a vet documenting it, either by a complete blood count, or a chemistry panel, or alternatively based upon physical exam.”

Separate from the report and fine, the NYSGC issued a press release on Monday underscoring how the entire PETA/Asmussen investigative process will lead to proactive regulatory changes in the future.

“While the troubling allegations of the PETA investigation were largely unfounded, our extensive review and other considerations have prompted the commission to put forth substantial changes to further combat the entrenched drug culture in horse racing,” NYSGC executive director Robert Williams said in a prepared statement. “We recognize PETA for playing a role in bringing about changes necessary to make Thoroughbred racing safer and fairer for all.”

The NYSGC release said the draft regulations will be released for industry comment in advance of official rulemaking. Among the proposed new mandates will be:

•No drug may be given to a horse except as an actual medical therapy.

•All metabolism-modifying drugs will be tightly controlled.

•Veterinarians may renew prescriptions based on only their medical judgment.

•The unnecessary use of any substance that abnormally affects a horse will be prohibited.

•Trainers must keep a log of all dispensed medicines administered by the stable.

PETA senior vice president Kathy Guillermo reacted with a statement about the NYSGC investigation, which read, in part: “We applaud this progress and hope it will mean greatly improved protection for Thoroughbreds. PETA’s goal was to ensure that horses are medicated only when they need it and that they won’t be raced or trained if they are injured and require drugs. Horses shouldn’t be fed thyroid hormones with their evening meals, and they shouldn’t be anywhere near a track if they’re in pain. We support the proposed new rules and urge the industry nationwide to back them as well.”

Although Brewster would not rule out legal action against PETA for damaging Asmussen’s reputation after the majority of its accusations were deemed unfounded by the NYSGC, he indicated that Asmussen seems to want to put the incident behind him (beyond his attorney-client relationship with Asmussen, Brewster said he has owned horses that have been trained by Asmussen, and that he has often socialized with Asmussen’s family).

“We’ll go through the report carefully, and we will then make a decision as to whether we want to have the opportunity to set the record straight with regard to the thyroid hormone supplement or whether Steve just wants to move on down the way,” Brewster said.

Brewster added that Asmussen was deeply shaken by the March 2014 suicide of 27-year-old Harry “Hub” Johnson Jr., who once worked as a foreman for Asmussen. Johnson’s death came about a week after PETA released the controversial audio and video footage that Brewster said had been recorded without the consent or knowledge of workers in Asmussen’s barns.

“First of all, we had a young man who committed suicide over it. That means more than ‘Steve’s reputation’ to Steve,” Brewster said. “We had a young man who was so devastated by being taped and being confronted that he was driven to a suicidal act. That’s something that we’ll never be able to get back, and [PETA] did that.”

Brewster continued: “It cuts deep, any accusation that’s made for public consumption that does damage to [Asmussen’s] collateral reputation. What [PETA] did is just completely try to devastate an industry using Steve as the instrument. They didn’t care about what was true. They took five months of tape and released like 12 minutes with dubbed-in words. It was truly an outrage. The fact that [NYSGC] would give traction to an organization like this…is unfortunate.”

Two other licensees who figured prominently in the PETA tapes were exonerated by the NYSGC.

The commission found no evidence that jockey Ricardo Santana, Jr. possessed an unlawful electrical shocking device while riding any Asmussen-trained horse at the 2013 Saratoga Meet, as alleged by PETA.

Scott Blasi was interviewed extensively by the NYSGC for, among other allegations, his purported roles in knowing jockeys might be carrying illegal electrical devices and for allegedly being an assistant trainer tasked with facilitating unethical veterinary practices. But Blasi was not sanctioned or found to be at fault in any of the NYSGC findings published in the report.