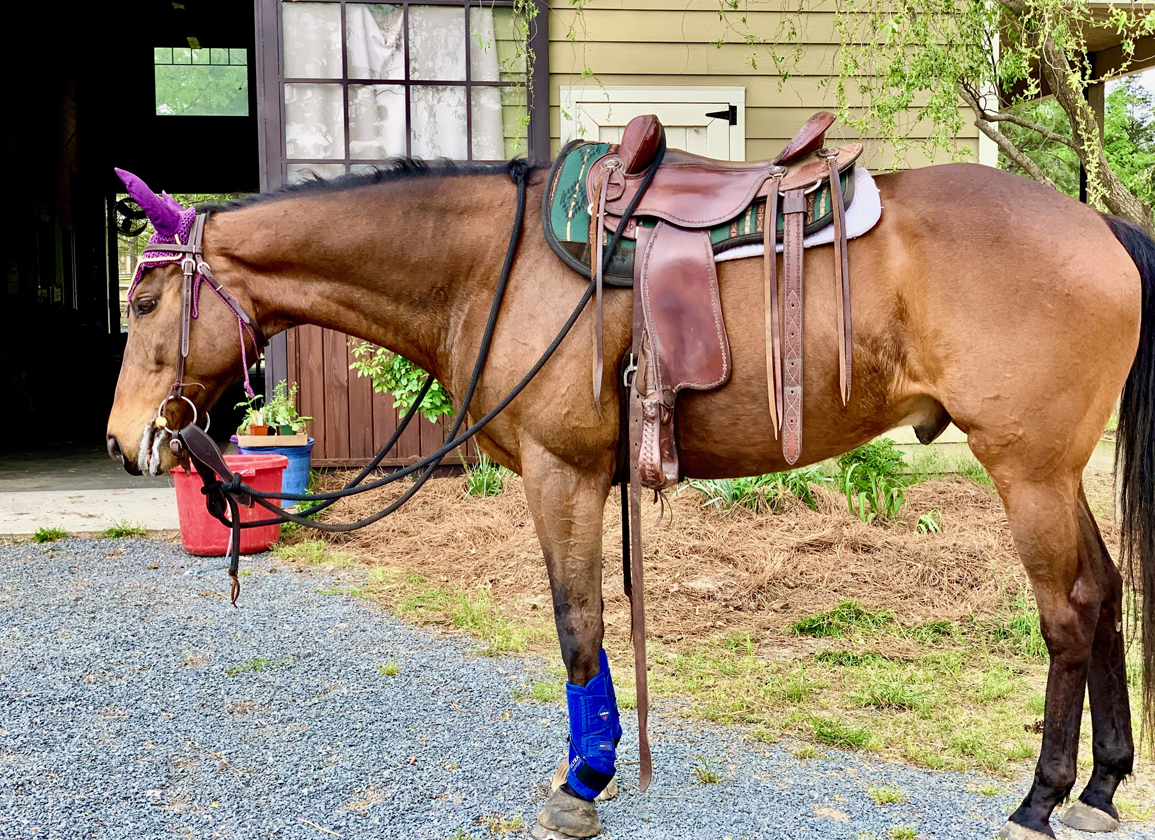 Ashleyluvssugar (Game Plan), a five-time Grade II-winning 10-year-old gelding, made a splash- quite literally- on social media this week in a post from After the Finish Line, where he was seen taking an enthusiastic wade through a stream in the North Carolina mountains.

The fan-favorite California-bred is now owned by Allie Conrad, who has worked with hundreds of ex-racehorses over the years, but said this one is truly one of a kind.

“This was his first off-the-farm trip where we took him camping up in the mountains,” Conrad shared. “I took him down to the river and he was unsure. What wasn't shown in the video was that I hopped down and kind of boulder hopped about 10 feet out so I wouldn't get wet but he would understand that he could follow me into the river. Well he took it quite literally and leaped onto the boulder with me, knocking me into the river. He looked like an elephant on a ball standing on this rock looking at me in the river like, 'Okay I'm here, now what?'”

(Video footage courtesy After the Finish Line and Allie Conrad )

A homebred for Sharon Alesia, Bran Jam Stable and Ciaglia Racing, Ashleyluvssugar raced 38 times over eight years for trainer Peter Eurton. He collected five Grade II wins, including two editions of the Charles Wittingham S. and also ran fifth in the 2016 GI Breeders' Cup Turf. He retired last spring with earnings of over $1.4 million as his trainer's second-highest earner.

When given the opportunity, Conrad jumped at the chance to take on the bay gelding.

“I have a huge fan-girl crush on stakes horses,” she said. “They have an arrogance and a confidence that I just love. A lot of people don't know how to deal with them because they can be very opinionated. Even to get their feet or teeth done, they're like, 'I don't know who you think you are but I won [x or y] race.' They know they're fancy. When he ran his last race and it was clear he wasn't loving it anymore, he came to me clean-legged, perfectly happy and in beautiful condition.”

Conrad has had her hands on her fair share of retired racehorses as the executive director of the aftercare organization CANTER Mid Atlantic for 20 years. When she retired stepped away years ago, she made it her goal to branch out with her own off-track Thoroughbreds.

“I decided to live by the motto that life is short, go do the things that bring you joy,” she shared.

During her time with CANTER, Conrad met Dawn Mellen, the President and Founder of After the Finish Line and an active member of her family's Bran Jam Stable.

“Her family is the gold standard for taking care of their racehorses,” Conrad said. “She would reach out to me asking about a horse they had owned as a yearling that was now running at the bottom at Laurel or Charles Town or wherever, seeing if I could go check up on them. In doing that, we ended up taking six of her family's horses that they hadn't owned for years, but they would provide for all expenses until we could re-home them.”

Three years ago Mellen called Conrad to let her know that it was time for their dual Grade III winner Bettys Bambino (Unusual Heat) to retire. Conrad was confused as to how Mellen wanted her to help.

“I was in North Carolina and he was in California. But she asked me very bluntly why I always commented on Betty's videos on social media and I said there was something about him that just spoke to my soul. She said her family had discussed it and they wanted me to own him. I was so honored. They shipped him here and soon after, started talking to me about Ashleyluvssugar.”

'Sugar' arrived in North Carlina last year, but Conrad said  it took some time for him to learn to relax in his new environment.

“One thing about stakes horses is that they're so used to their routine and the hustle and bustle of shipping, racing and adoring fans,” she explained. “They feed off of it and can get depressed when they come into a quieter environment. They've gone from training hard every day to essentially doing nothing so it can be a little bit of a challenge, but I just happen to love that challenge.”

After about 10 months of reassurance from his new owner, Sugar began settling into his new job description.

“He finally started to look to me for guidance when he was questioning things,” Conrad said. “It goes back to that stakes-horse mindset where he's like, 'I don't need you. I know my job.' But he finally took a breath and realized I would make the decisions for him.”

“I would call this horse cheeky and brilliant,” Conrad added of his personality. “He's got a sense of humor and is really expressive with his feet. We call him Michael Flatley, Lord of the Dance. He slings his legs up in the air every time you ask him to do something. Some people would think he was being aggressive, but it has to do with the fact that he does everything with enthusiasm. You ask him to do something and he does it times 100.”

Conrad said that she has plans to take Sugar to this year's Retired Racehorse Project's Thoroughbred Makeover in October. There he will be competing for the Georgia B. Ridder Foundation's $2,500 Top-Placed Cal-Bred Award. 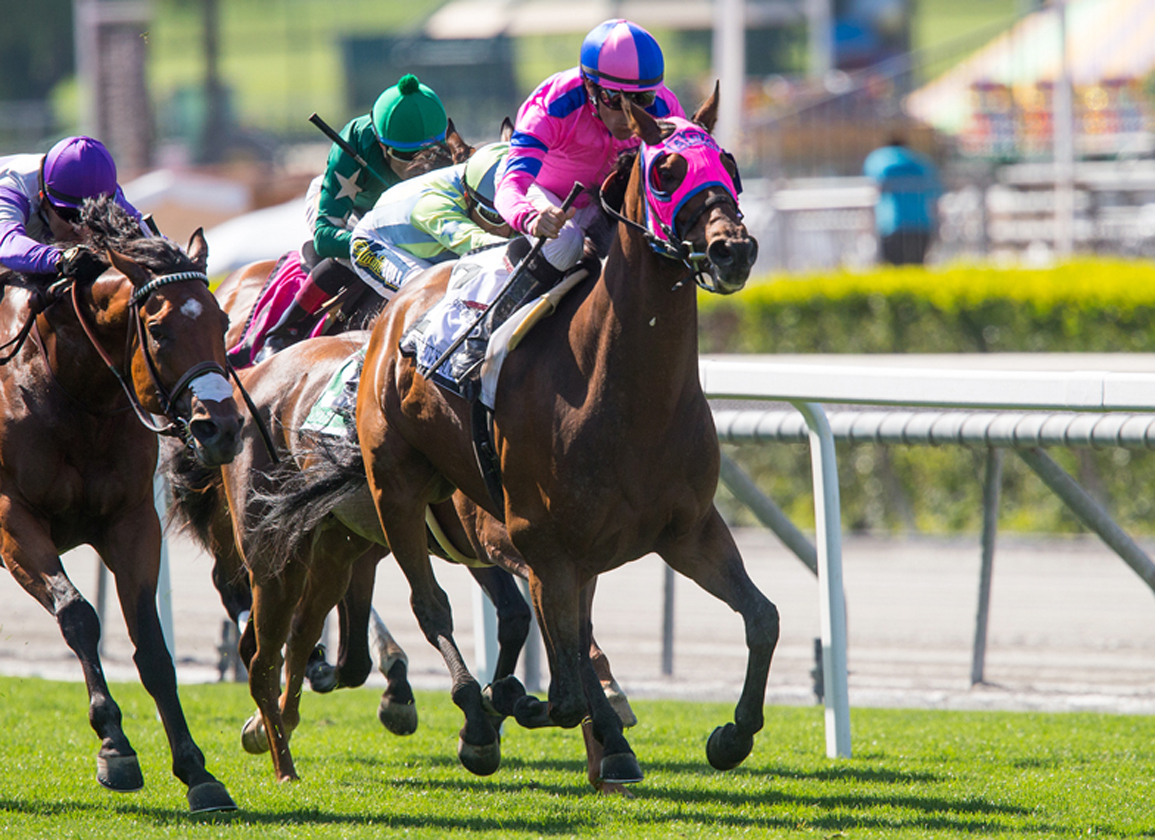 “I will probably lean him towards something non-traditional,” Conrad said. “With him being so quick and athletic, I needed a Western saddle with him so I'll probably be aiming him for some of the Western disciplines. He may tell me something different, but we don't have to decide for a few months. If you teach him something, he owns it. A quiet brain is a trainable brain, and so I can basically teach him anything now that his brain is quiet enough to be taught.”

While she's not sure in what area Sugar will end up excelling, she knows he has all the potential to be a success.

“He is a very different-brained horse,” she said. “I wouldn't say he will be my last Thoroughbred, but I'm pretty sure the universe sent me the most complicated re-training project. He's not difficult, he's just weird and funny and I love it.”

Ashleyluvssugar has been a very different pupil than Conrad's other Peter Eurton trainee. 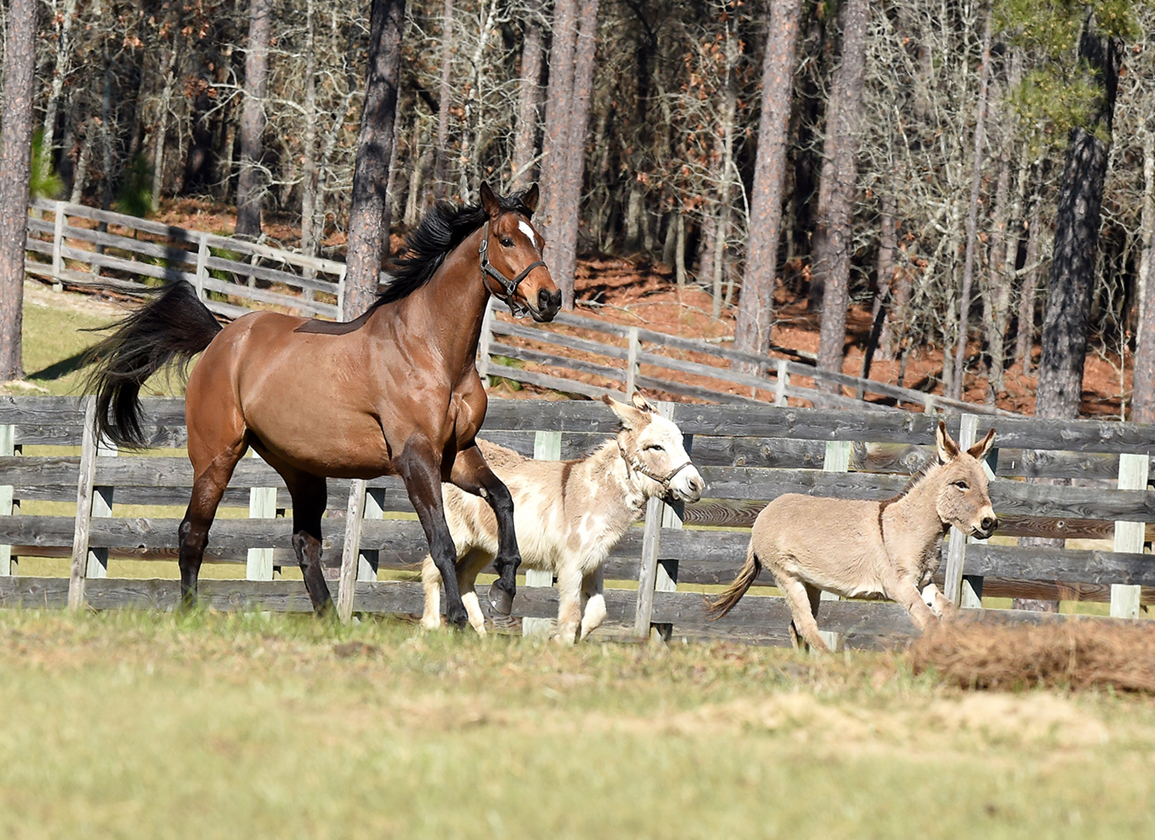 “Bettys Bambino is the polar opposite. With him, everything is very serious. There's no joking, no laughing, he does his job and does it well. I call him a once-in-a-lifetime horse. He's unbelievably quiet and steady. My niece will come and ride little walk-trot lessons. He and I have gotten into mountain riding. We go all over the East Coast riding up and down mountains. We go camping, we gallop on beaches and trail ride every day.”

Conrad has a trip planned next year to take Bettys Bambino out west to ride in the mountains of Utah, Montana and Wyoming.

“Sugar will probably come along too,” she said. “My two little racehorses and I are going to show up some Quarter Horses and run up  the mountains faster than anybody else.”

The horsewoman has gathered quite the collection of racing characters in her barn.

“Having both Bettys Bambino and Ashleyluvssugar in my barn is an absolute treasure and a joy. They go out with their best friend Pennmarydel (Dynaformer), who is Barbaro's full brother. He didn't have the racing success but he has the bloodlines and knows he's fancy. I've got a bunch of big egos in my barn, but they match with my own so it works just fine.”