As Time Goes By Soars in Santa Margarita 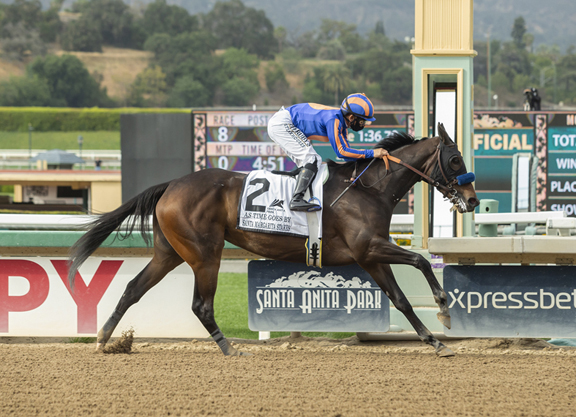 As Time Goes By | Benoit

Sent off the prohibitive 3-5 favorite against a seemingly overmatched field in Saturday's GII Santa Margarita S. at Santa Anita, Michael Tabor, Mrs. John Magnier and Derrick Smith's As Time Goes By (American Pharoah) was taken straight to the front by Hall of Famer Mike Smith and reeled off opening fractions of :23.17 and :46.98 as Harvest Moon (Uncle Mo) offered some mild pressure. Well in hand and not doing more than she had to down the backside, the half-sister to 3-year-old champion Will Take Charge was finally given her cue by Smith and picked it up a notch through three-quarters in 1:11.36. Easily drawing clear of her stablemate passing the quarter pole, she powered on all boosters late en route to an eye-catching eight-length victory over 31-1 longshot This Tea (Curlin). Harvest Moon rounded out the trifecta.
“I was shocked [to be on the lead), I actually thought [Pharoah's Heart] and Harvest Moon would show a little more speed,” said Smith, who won last year's Santa Margarita with Paradise Woods and who has won the race a total of five times.  “But today, she actually jumped really quick out of there, and she fell right into stride so nice and I just stayed out of her way.”
Smith continued, “She warmed up really brilliant, acted really good in the gate, stood really well. That was really impressive today, she did that well, well in-hand and galloped out nice.”
As Time Goes By needed three starts to get off the duck, but did it in style when scoring by four lengths at Los Alamitos in December. Back in the winner's circle following a flashy nine length win in a Santa Anita allowance Jan. 17, she took some support at 9-5 in the Mar. 13 GI Beholder Mile S. but found champion sophomore filly Swiss Skydiver (Daredevil) 2 3/4 lengths too good that day.
Added winning trainer Bob Baffert, “I was debating on running her next week in Kentucky or here, but since I want to develop her slowly and the Breeders' Cup [at Del Mar] is the main goal, we chose to stay [home].”
Baffert also trained As Time Goes By's Triple Crown winning sire, American Pharoah, also conditioned by Baffert.
“She's so sweet like her sire,” he said. “She's the sweetest thing in the barn. I have a soft spot for her, because I think of American Pharoah every time I walk by her stall.”

Pedigree Notes:
As Time Goes By is the last reported foal out of 2013 Broodmare of the Year Take Charge Lady, who has turned just about everything she's touched to gold. Originally a $175,000 yearling at Fasig-Tipton's Kentucky summer sale, Take Charge Lady earned nearly $2.5 million and won three Grade I events. She was sold at the 2004 Keeneland November sale for $4.2 million carrying her first foal, Charming (Seeking the Gold), who would go on to sell as a $3.2-million Keeneland yearling. Charming would become the dam of 2014 champion 2-year-old filly Take Charge Brandi (Giant's Causeway) and additional GISW Omaha Beach (War Front). Later foals of Take Charge Lady would include 2013 champion 3-year-old colt Will Take Charge (Unbridled's Song) and 2012 GI Florida Derby winner Take Charge Indy (A.P. Indy), now both Kentucky-based sires.
Like both Charming and Will Take Charge, As Time Goes By is inbred top and bottom to Mr. Prospector, although farther back than either of those half-siblings. As Time Goes By is the 10th graded winner and 15th black-type winner for her Mr. Prospector-line sire, 2015 Triple Crown winner American Pharoah. The former Horse of the Year is the leading third-crop sire in North America by earnings, stakes winners, and graded winners. As Time Goes By marks his first stakes winner out of a mare by Dehere, who was the champion 2-year-old colt of 1993 and counts 115 stakes winners out of his daughters, including Breeders' Cup winners Midnight Lute (Real Quiet) and City of Light (Quality Road).