As Time Goes By Ekes Out Santa Maria Win 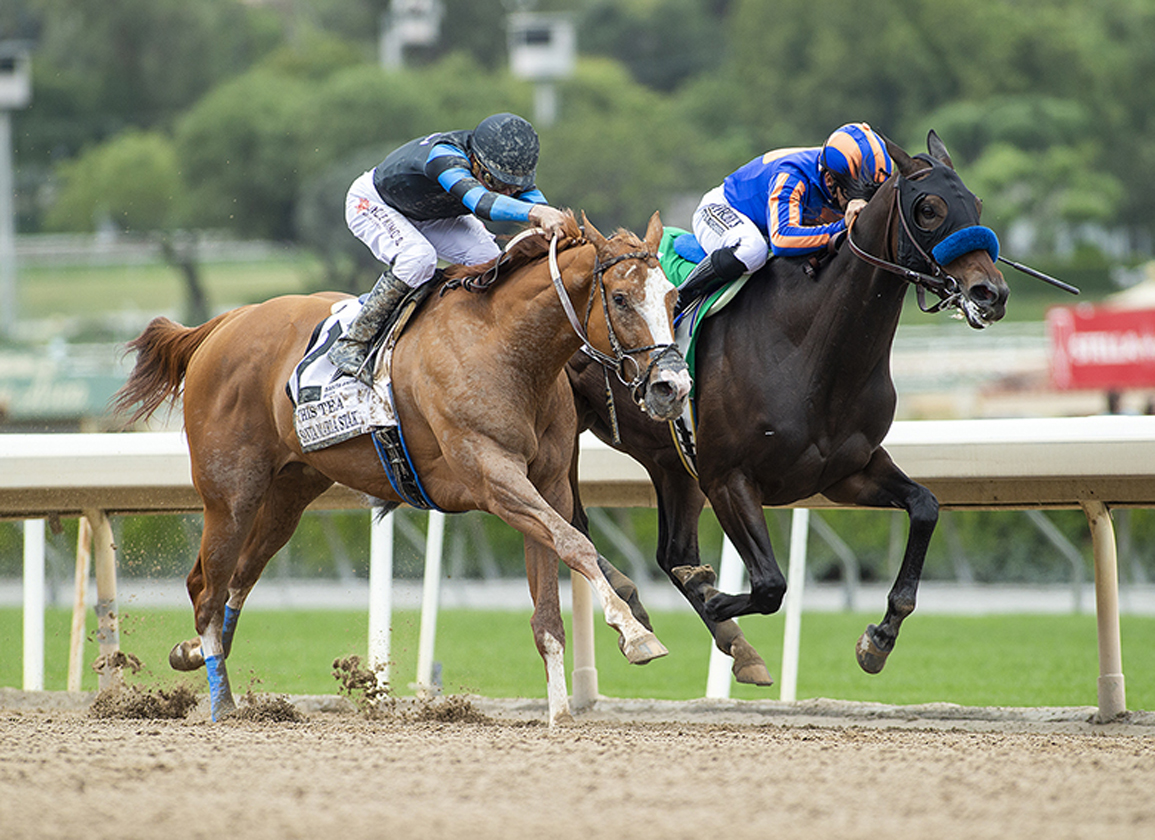 As Time Goes By besting This Tea | Benoit

Michael Tabor, Mrs. John Magnier and Derrick Smith's As Time Goes By (American Pharoah) aired by 9 1/4 lengths in her latest start in the Apr. 24 GII Santa Margarita S., however, she had to work a lot harder when nosing out 23-1 longshot This Tea (Curlin) in Saturday's GII Santa Maria S. at Santa Anita.

Breaking from the outside of a four-horse field, the 4-year-old allowed Miss Stormy D (Tapizar) to assume the helm through opening fractions of :23.83 and :47.12. Given the cue by Mike Smith at the three-furlong marker, the 2-5 favorite easily overtook the early pacesetter and was joined by Ce Ce (Elusive Quality), who loomed on her outside hip as This Tea started to make her move from the back. Narrowly ahead of the tightly-bunch field turning for home, the daughter of GISW Take Charge Lady dispensed of Miss Stormy D to her inside as Ce Ce also began her retreat. Meanwhile, This Tea continued to inch closer through the length of the lane and the two fillies hit the wire seemingly in unison, although the photo gave the edge to the Bob Baffert trainee. Miss Stormy D was third with Ce Ce fourth.

“I told Mike, we've been going easy on her, not too hard for this race,” said Baffert, who registered his meet-leading 14th stakes victory. “This is the first time she's come back really blowing. That filly that ran second, ran a big race. “[As Time Goes By]'s heart and true grit made her hang in there. We knew Miss Stormy D was quick, and you could tell turning for home that my filly wasn't doing it that easily.”

As Time Goes By broke her maiden at third asking at Los Alamitos last December before returning with a flashy score going a mile in a Santa Anita allowance Jan. 17. Finding GI Preakness S. heroine Swiss Skydiver (Daredevil) 2 3/4-lengths too good in the GI Beholder Mile S. Mar. 13, she bounced back to hand This Tea a sound defeat in the nine-furlong Santa Margarita.

“They ran good, you know, my hat's off to the filly that finished second, she ran a huge race,” added Smith. “She'll get more out of this race. After she ran the last time out, they kind of backed off her a little bit. She's a big mare with a big frame and she'll tend to gain some weight and I could tell she was a little more stocked today. She got a little tired, but she'll get a whole lot out of that.”

Pedigree Notes:
In spite of her status as a MGSW & GISP runner, As Time Goes By still has a long way to go to live up to family expectations. She is the final foal of Broodmare of the Year, MGISW, and $4.2-million Keeneland sales mare Take Charge Lady (Dehere), making her a half-sister to champion Will Take Charge (Unbridled's Song), GISW Take Charge Indy (A.P. Indy), and to the dam of champion Take Charge Brandi (Giant's Causeway) and MGISW Omaha Beach (War Front). Not all of Take Charge Lady's 10 total foals went through the sales ring–As Time Goes By didn't–but they've often made waves when they have: Charming (Seeking the Gold) sold for $3.2 million as a yearling in 2006, I'll Take Charge (Indian Charlie) was a $2.2-million yearling in 2013, and Lady Take Charge (War Front) was a $3.2-million weanling in 2015.
Take Charge Lady was one of 80 stakes winners for 1993 champion 2-year-old Dehere, who died in 2014 in Turkey after previously standing in Kentucky, Australia, and Japan. His daughters have produced 117 black-type winners to date, including champion Midnight Lute (Real Quiet) and Breeders' Cup winner City of Light (Quality Road). As Time Goes By is a member of the first crop of Triple Crown champ American Pharoah, who is enjoying the fruits of stellar books of mares with 15 black-type winners in his first two crops. Among his 10 graded winners are three who have achieved the Grade I/Group 1 echelon: Harvey's Lil Goil, Café Pharoah, and Van Gogh.