As Laurel Meet Winds Down, Brittany Russell Winning at Over 50% 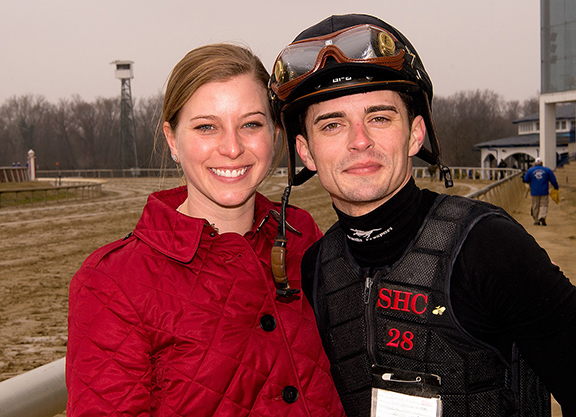 Brittany Russell had every reason to expect that she was going to have a good run at Laurel when the current meet began Oct. 8. She is a high-percentage trainer and knew that several of her horses were sitting on winning races. But the 31-year-old, who has been on her own for less than three years, never could have expected what was about to unfold. No one could have.

Through Dec. 17, Russell has won 22 of her 42 starts at Laurel, putting her winning percentage at 52% for the meet. The Dec. 17 card was canceled due to a winter storm and she had no starters on Dec. 18. While there are no known records for highest-winning percentage ever at a meet, it's conceivable that Russell could become the first ever trainer with a sizeable sample of starters to finish a meet at a major track above the 50% threshold.

“I was optimistic about this meet, but you never think you are going to win at 50%,” Russell said. “We walk them over well-prepared. I will say that. The percentage at this point in time is, honestly, a bit crazy.”

Russell is also on top of the Laurel trainer standings by one win over Claudio Gonzalez. She has started 42 horses at the meet to Gonzalez's 93.

Before going out on her own, she got a good education that prepared her for what has been nothing less than a meteoric rise to the top of the Maryland standings. She spent time working for Ron Moquett, Jimmy Jerkens and, most significantly, Brad Cox. Known as Brittany Trimble before her marriage to Maryland jockey Sheldon Russell, she was an assistant to Cox for more than three years, learning from a trainer who is also known for his high-winning percentage.

“Working for Brad Cox was a great job,” she said. “He was the reason I went out on my own. He left me alone as an assistant and he taught me a lot. Brad is such a good horseman. He made me want to give this a try.”

She had worked primarily in New York for Cox, but decided to call Maryland home when starting her training career. The decision was an easy one because her then fiance was among the top riders on the circuit. Like his wife, he is having a standout meet. With 41 wins, he is the leading rider at the meet.

Russell wasted no time getting started. She won her first ever race, capturing a maiden special weight event with Oh My (Medaglia d'Oro) Feb. 25, 2018 at Laurel. She only had 11 winners in 2018, but her winning rate was 24%. She had a similar year in 2019, winning 17 races from 66 starters, good for 26%. Those are the sort of percentages that owners notice.

“You win some races and then somebody else might give you a call,” she said. “That's how it has worked for me. People show interest when they see you are having success.”

With 11 winners, she tied for ninth place in the standings at the Laurel meet that concluded Sept. 19 of that year, but was steadily building up her stable. She is up to 40 horses and her clients include high-profile owners like Mike Dubb, Sol Kumin, Robert LaPenta, Ten Strike Racing, Chuck Zacney and Hillwood Stables. She said that bloodstock agent Liz Crow has been instrumental in helping her get owners.

Russell won with her first starter at this meet and kept on going, winning with five or her first 10 starters and nine of her first 14. Her longest losing streak at the meet has been four.

“To have that kind of winning percentage, you have to be lucky,” she said. “It's just that a lot of our horses were ready to fire at the right time.”

But a meet like the one she has had comes with a price. In horse racing, jealousy and finger pointing are never far behind when someone is having the kind of meet Russell is. That she is female, young and has been on her own for such a short period of time, only fuels the critics and skeptics.

“You just try to ignore that stuff and focus on what's important,” she said. “We work hard. I have a really good team behind me and my husband is a big part of that. He is a rock and, naturally, rides a lot of our horses. We work really hard. This just didn't fall into our lap. People will say she gets all the good horses and the good owners. Well, you have to work hard to get those things.”

With all the recent success, Russell is contemplating her next steps. For the first time, she has a division at Gulfstream, where she has yet to win a race from four starters. She said she has no intention of leaving Maryland, but said she would like to branch out and have a second division in a place like New York.

“I sent a few turf horses to Gulfstream this year,” she said. “It's tough to break into a place like that. We are trying. You kind of have to do it. You have to get your feet wet and take a swing at something like that. It might be tough for a little while, but we will keep plugging along.”

She said another goal is to win her first graded stakes. She's won five stakes in her career, four of them with the Maryland-bred star Hello Beautiful (Golden Lad).

Russell knows she can't count on winning with 50% of her starters forever and that even the slightest slump could drop her below that mark. But she's got a pretty good idea of which horses she will be starting the remainder of the year and is confident that she isn't done winning. Nor has she stopped dreaming of even bigger and better accomplishments.

“Of course, I would love to have better horses,” she said. “I wouldn't mind having another string somewhere where there's a bit of a higher profile. I just hope we are still on the rise. I would love two years from now to look back and be able to say that we had a good 2020, but look at what we are doing now.”