As Advertised: Into Mischief Filly Another Rising Star for Baffert 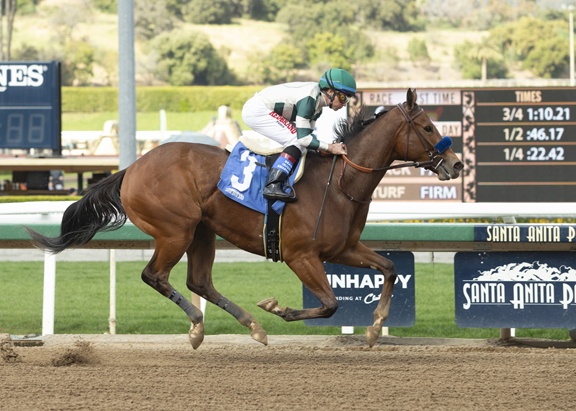 The highly regarded Gamine (f, 3, Into Mischief-Peggy Jane, by Kafwain) lived up to the hype in her much-anticipated unveiling for Hall of Famer Bob Baffert at Santa Anita Saturday, easily good enough for ‘TDN Rising Star’ honors.

Gamine breezed four furlongs in :46 2/5 (3/43) at Santa Anita Mar. 2 (XBTV Video), and was pounded into 1-9 favoritism for this debut run. She broke like a shot over her three overmatched rivals, led through fractions of :22.42 and :46.17, cornered for home in complete command, and was never seriously asked down the stretch by Drayden Van Dyke, coasting home to a 6 1/4-length victory. Stablemate Reem (Danza) was second.

Gamine topped last year’s Fasig-Tipton Midlantic 2-year-old Sale, bringing $1.8 million from Michael Lund Petersen. Purchased by Brad Grady’s Grand Oaks for $220,000 at Keeneland September as a yearling, the bay blossomed into a seven-figure juvenile after breezing in :10 flat for Bobby Dodd in Timonium.

Gamine is out of SP Peggy Jane (Kafwain) and hails from the family of Canadian champion Dynamic Sky (Sky Mesa). Peggy Jane is also responsible for the 2-year-old colt Splashtown (Speightstown) ($300,000 FTKOCT yearling purchase by Frankie Brothers) and a yearling filly by Ghostzapper. She was bred to Kantharos for the 2020 season.