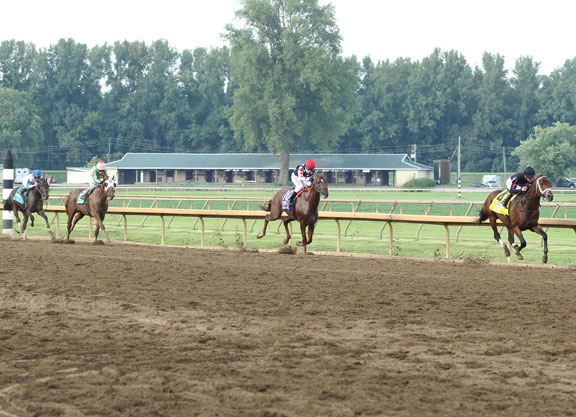 Art Collector leaves them behind | Coady

There was no easy ride for heavily-favored ART COLLECTOR (c, 3, Bernardini–Distorted Legacy, by Distorted Humor) in Sunday's Runhappy Ellis Park Derby, as he was pressured hard on the front end throughout, but in the end it made little difference, as the streaking bay turned away all challengers to cement himself as one of the favorites for the GI Kentucky Derby.

Breaking sharply at 2-5, Art Collector made the lead on his own power under Brian Hernandez, Jr. while being kept a bit off the rail heading into the clubhouse turn. Pushed along by 99-1 shot Truculent (Raison d'Etat) through a :23.33 quarter, he got no breather through a :46.74 half. Just as soon as he put aside the pace-pressing bomb, the Bruce Lunsford homebred was confronted with a two-pronged challenge from GIII Ohio Derby winner Dean Martini (Cairo Prince) and Attachment Rate (Hard Spun) as three-quarters went up in 1:10.70. The former was the first to sputter as the trio neared the lane, but Attachment Rate put in a game bid before being disposed of himself passing the furlong grounds. Without challengers for the final sixteenth, Hernandez rode Art Collector home hands and heels, finishing 3 1/4 lengths to the good in 1:48.02. Attachment Rate was clear for the place.

“He's such a professional horse, and he showed it again today. He was able to go :46 2/5 on the lead and just able to widen on them again,” said Hernandez. “It's a testament to the horse, how really good he is. That's quick for a half, especially going a mile and an eighth. That's really fast for a horse. And he was able to do it within himself. He traveled like a winner the whole way. We say that all the time, but being on their back, we have an instinct to know how fast they're going. That's all I wanted to do: just stay out of his way and let him travel.”

A second-out graduate on the Kentucky Downs turf, Art Collector was off the board in his next two starts and ended up as one of several horses disqualified for trainer Joe Sharp due to a levamisole positive after dominating a Churchill optional claimer in his 2-year-old finale. Switched to trainer Tom Drury after that, he is undefeated as a sophomore under the new banner, capturing a pair of allowances this spring in Louisville before legitimizing those runs with a similarly sharp tally in the GII Toyota Blue Grass S. July 11 at Keeneland.

“This is huge,” said Hernandez. “We're going into the Derby now with a legitimate horse. Like we said after the Blue Grass, he's proven he's getting better and better with each race. He showed it again today. He put everyone away. He did it all on his own and ran away from there.”

Art Collector, one of 75 stakes winners and 46 graded stakes winners for Darley's Bernardini, is the second foal to race out of Grade I-placed Distorted Legacy, who finished fourth, beaten just a length, at 45-1 in the 2011 GI Breeders' Cup Filly & Mare Turf. She is a half-sister to GSW/MGISP Vision and Verse (Storm Cat) out of Grade I-placed Bunting. This is also the female family of GI Breeders' Cup Distaff heroine Stopchargingmaria (Tale of the Cat) and Venezuelan Horses of the Year Ninfa del Cielo (Ven) (Big Prairie) and Bukowski (Ven) (Big Prairie). Distorted Legacy has a yearling Into Mischief colt and foaled another colt by the same sire Feb. 5.