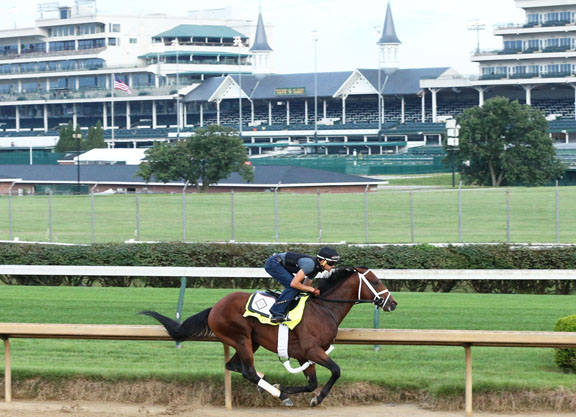 With just seven days remaining until the coronavirus-delayed GI Kentucky Derby, the race's likely second favorite Art Collector (Bernardini) topped a busy Friday morning worktab at Churchill Downs. News also emerged from Saratoga that 'TDN Rising Star' Caracaro (Uncle Mo) would be forced to miss the 'Run for the Roses' after suffering an undetermined injury in a breeze Friday morning.

With gameday jockey Brian Hernandez, Jr. in the irons, Bruce Lunsford homebred Art Collector (second in the TDN Kentucky Derby Top 12) went five-eighths of a mile in a 1:00.80 (XBTV video) under the watchful eye of trainer Tom Drury, Jr. Art Collector enters the Derby on a four-race winning streak, including the GII Toyota Blue Grass S. July 12 and a defeat of Attachment Rate (Hard Spun) in the Aug. 1 Runhappy Ellis Park Derby.

“He really loves this track here at Churchill,” Drury said. “He galloped pretty strong yesterday on his first day back at Churchill and turned in a really strong work today. The difficult part is out of the way and now we just need to keep him happy and healthy until Saturday.”

Louisville native Lunsford added in an NTRA teleconference: “He did exactly what we wanted. He worked in basically '12s' and I would say that he came out of it looking like he hadn't really done much. There wasn't any sense in taking any unnecessary chances. [Tom and Brian] were very happy with the work and how he handled it. He looks terrific.”

Art Collector figures to be a clear second wagering choice to GI Belmont S. and GI Runhappy Travers S. hero Tiz the Law (Constitution), who works at Saratoga either Saturday or Sunday.

Caracaro (#11 TDN Derby Top 12) was ruled out of Derby contention by trainer Gustavo Delgado after suffering a slight injury to his right front leg during the gallop out of a six-furlong breeze at Saratoga Friday morning. The GIII Peter Pan S. and Travers runner-up was timed in 1:12.26 for his move, but exercise rider J.J. Delgado dismounted when he felt there was an issue.

“I don't know how bad it is, but later on we're going to x-ray and find out,” assistant trainer Gustavo Delgado, Jr. said. “It's disappointing because he worked so well. He just took a bad step and he wasn't feeling right. His work had already been done. I don't think it's going to be that bad, but we'll know more once we do the proper examination.”

Ny Traffic (Cross Traffic, #10), who nearly came back on 'TDN Rising Star' Authentic (Into Mischief) when last seen in the GI TVG.com Haskell S. July 18, was also in action up at Saratoga, breezing five furlongs in :59.45 just after the renovation break with David Cohen up.

“I thought he went super. It's what we wanted,” said trainer Saffie Joseph, Jr. “I got him in 59 and change and out in 1:12 [for six furlongs. I just wanted to see him cool out good and scope good. With our fingers crossed and with a good eight days [before the Derby], we have a very good chance. Today was important. I just wanted to see him come out of the work good.”

Sole Volante (Karakontie {Jpn}, #8)) is taking a somewhat less-conventional approach to his pre-Derby preparation and in that vein, the GIII Sam F. Davis S. winner and runner-up to King Guillermo (Uncle Mo) in the GII Tampa Bay Derby, went five furlongs over the Palm Meadows turf course in :57.80 to the delight of co-owner and assistant trainer Andie Biancone.

“He worked really well. We did a shorter work today to get a little speed into him,” said Biancone. “He worked very well and came back great.”

Luca Panici has the call on the gelding, a distant sixth to Tiz the Law in the Belmont in his most recent racetrack appearance.

“I'm excited to be there. I'm thankful to the connections for giving me this opportunity with a good horse. I'm very, very happy to be a part of this team,” Panici said. “I'm very, very proud and proud of the people who work with me.”

Back at Churchill, the morning's other breezers included: