Art Collector All the Way in Woodward 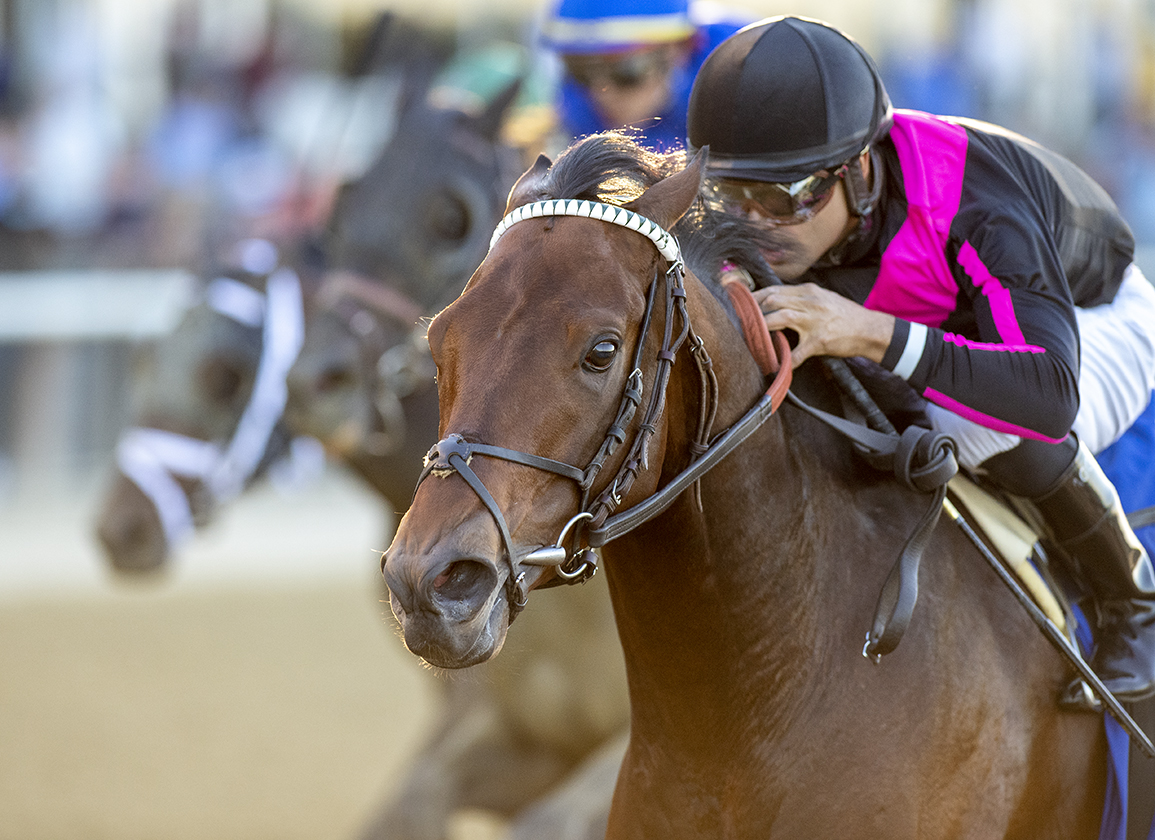 The controlling speed of Saturday's GI Woodward S. on paper, Bruce Lunsford's Art Collector (Bernardini) made best use of his best asset and took them gate-to-wire to earn an overdue Grade I victory. Favored Maxfield (Street Sense) completed the exacta, while Dr Post (Quality Road) flashed home from the tail to be third.

Looking to remain perfect in three starts since an amicable trainer switch from Tommy Drury to Bill Mott, Art Collector bounced beautifully from gate three and was soon in front for Luis Saez, as 64-1 Mo Gotcha (Uncle Mo) applied some token pressure with Forza di Oro (Speightstown) also prominent to the outside. Code of Honor (Noble Mission {GB}) and Maxfield also raced in close attendance in a tightly bunched pack, while Dr Post, who veered inward at the break, brought up the rear.

Art Collector lobbed them along through an opening four furlongs in a very manageable :47.78 and the Woodward was very much his race to lose after a three-quarter split of 1:12.12. Maxfield was nipping at the front-runner's heels as they hit the two-furlong pole, but Saez hadn't spent a penny on Art Collector, who kicked when asked for an effort and won with relative ease. Maxfield, arguably better when able to settle a bit farther back and finish up, was forced to race closer to the pace than is his custom and fought on bravely in an out-of-his-element performance. Dr Post came home on his incorrect lead to be third.

“It was a wonderful race,” said Saez. “I had a lot of confidence in my horse. He always tries so hard. He always comes with a run and finishes with run and today he ran his race. We expected to be on the lead. He broke so well and he was able to control the pace.”

Winner of the GII Toyota Blue Grass S. last July, Art Collector prepped for a possible start in the GI Kentucky Derby with a facile score in the Runhappy Ellis Park Derby early the following month, but was withdrawn from the Run For the Roses in the week leading up to the race with a minor foot issue. Fourth in the GI Preakness S. and eighth to Knicks Go (Paynter) in the GI Breeders' Cup Dirt Mile, Art Collector was shelved, returning to be sixth in the June 25 Kelly's Landing S. at Churchill. Turned over to Mott thereafter, he wired the field in the Aug. 6 Alydar S. at Saratoga and was exiting a 1 1/2-length success in the GII Charles Town Classic Aug. 27.

A Breeders' Cup appearance would be in the Classic and not the Dirt Mile, Mott said.

“I'll talk to [owner] Mr. [Bruce] Lunsford. He makes the final decision, but I don't know what we have to lose,” the conditioner said. “I'd run him a mile and a quarter. A mile and an eighth hasn't been a problem for him, so why would I cut him back?”

Art Collector has legitimate claims to carry the torch going forward for the late Bernardini, who is now the sire of 16 Grade I/Group 1 winners worldwide, 13 of whom have accomplished the feat north of the equator. Distorted Humor is now the broodmare sire of 13 Grade I winners.

Now 14, Distorted Legacy is the dam of the 2-year-old colt Legionnaire (Into Mischief), a yearling colt by the Spendthrift maestro and a filly foal by Justify. She was covered by Medaglia d'Oro this past breeding season.