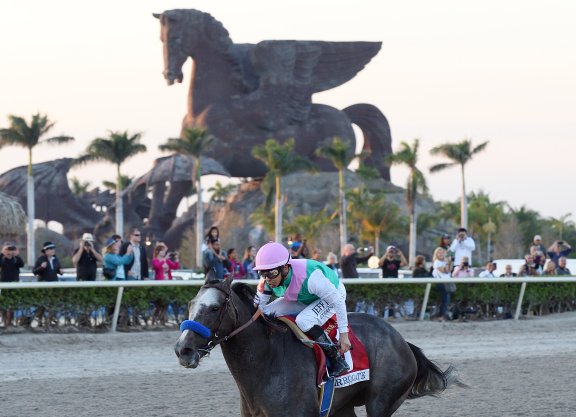 The official final time for the $12-million GI Pegasus World Cup won by champion Arrogate (Unbridled's Song) has been lowered from 1:47.61 to 1:46.83, setting a new track record for nine furlongs at Gulfstream, Trakus reported late Thursday. (Click here to view updated chart). The previous record of 1:46.86 was set by Lea (First Samurai) in the 2014 GI Donn H., which was replaced by the Pegasus this year.

The Trakus release explained, “Trakus technology functions reliably, robustly and on a daily basis all over the world, and has been operated for more than 110,000 races since its introduction in 2006. During the Pegasus World Cup, a minor anomaly in the underlying tracking data was experienced for Arrogate in the measurement cycle reporting as the horse approached the finish line. On major race days, extreme environmental conditions are not unusual and may impact reliable tracking performance. Such conditions existed during the record-setting Pegasus World Cup, which resulted in the live race final time being measured with an error of a fraction of a second.

Arrogate returned to his California base Sunday and trainer Bob Baffert reports that the “TDN Rising Star” is doing well following his Pegasus romp.

“He looks great,” Baffert remarked. “He was out jogging here [Thursday], but we have no plans yet [for his next race]. We've got a lot of options, but we're going to give him a couple weeks to see how he's doing before we decide.”

The Hall of Famer continued, “I haven't really mapped out a schedule for him, although it looks like the race didn't take a lot out of him. He looks good.”

A record-breaking winner of the GI Traver S. in August, Arrogate bested newly crowned Horse of the Year California Chrome (Lucky Pulpit) in the GI Breeders' Cup Classic Nov. 5. The Juddmonte runner kicked off 2017 on the same note with a dominant success in the Pegasus World Cup Saturday over a field that included California Chrome and several other Grade I winners.