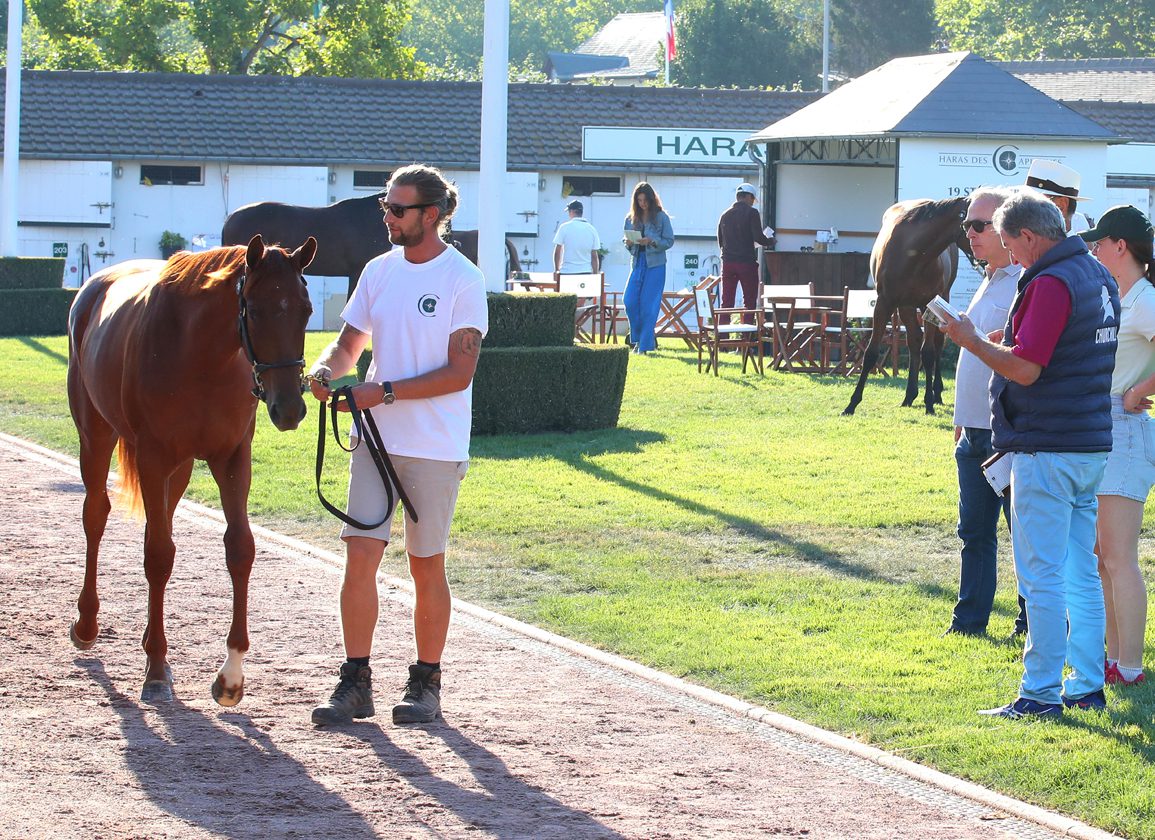 DEAUVILLE, France-There were times at Arqana on Friday when it felt as though navigating your way through the Champs-Elysees roundabout during rush hour would present a far more straightforward task than slaloming between the scores of yearlings around the sales complex on the eve of the August Sale.

It was predictably busy at Barn B, where Felix Lepeudry of Elevage de Tourgeville, readied a six-strong draft to be inspected by two heavyweights from either corner of the globe underneath a clear blue sky and a welcome breeze.

Getting their shows in were Henry Field of Newgate Farm in Australia and leading American trainer Kenny McPeek, with their presence in Deauville speaking to the international feel to what is Europe's first major yearling sale of the year.

Yoshito Yahagi, William Haggas, Joseph and Donnacha O'Brien, Francis Graffard and Freddy Head have all been seen to be getting their steps in over the past few days and even leading owner-breeder Andreas Putsch described the atmosphere on the ground as “the best I've ever seen” in between viewings.

The hefty footfall may have had some consignors channeling their inner air traffic controller as future aeroplanes were sent flying from one corner to the next but Lepeudry remained grounded.

“We have been gifted by nature to have such lovely-looking animals,” he said when asked to sum up his draft. We were lucky that we made some clever matings; sending two mares to Iffraaj (GB) in the same winter was a tough decision but there are only two in the catalogue and we have them both.

“Iffraaj had a Group 2 winner recently with My Prospero (Ire) in the Prix Eugene Adam and the filly [lot 50] and the colt [lot 95] that we have by him are being pulled out quite a lot.”

He added, “The Iffraaj filly is out of Ming Zhi Cosmos (Fr) (Duke Of Marmalade {Ire}), who was bred at home obviously, and she then went to Australia.

“She was covered four times down there by China Horse Club and we decided to buy her back and bring her home. She had a stop in Newmarket and visited Iffraaj so the result is quite pleasant.

“That's her first northern hemisphere foal. We are a small farm so it's exciting to be able to fly a horse. It was just a crazy experience.”

It's a dangerous thing when, as well as making clever decisions, lady luck shines down on you, and Lepeudry is in no doubt that the stars have aligned for the family-run stud this year.

He explained, “We have a Zarak (Fr) filly [lot 121] as well. We sent the mare [Santa Louisia (GB) Highest Honor {Fr})] to Zarak thinking, maybe, and now he is flying. He is red-hot and thankfully we have such brilliant breeders in France still like the Aga Khan.

“Lot 166 is an Oasis Dream colt out of Tilett (GB) (Rock Of Gibraltar {Ire}) and she was named after my great grandfather's friend, Colonel John Tilett, who was a famous war hero. He fought on D-Day and the Oasis Dream is the eighth generation of that family that we nursed on our farm. As a son of Oasis Dream, it brings a bit of Lyphard and Mill Reef into that mating, and that makes the inbreeding that we had with Robin Of Navan (Fr).

“Lilliside (Fr) (American Post {GB}), the dam of Lys Gracieux (Jpn) (Heart's Cry {Jpn}) who lost the French 1000 Guineas in the stewards' room to Special Duty, is also in the family so it keeps the pedigree rolling for us. He is a lovely animal. I love him actually.”

With 24 yearlings to sell, Haras D'Etreham will offer one of the biggest consignments at the sale, with executive director Nicolas de Chambure excited about what the next three days will bring.

He said, “It's a diverse group of people looking at our horses so we can be optimistic. We have a nice filly [lot 98] who is from the first crop of Blue Point (Ire). She is from a good family and we're looking forward to her. There is a lovely Frankel (GB) filly [lot 247] out of a Dubawi (Ire) mare [Crystal River {GB})} and we've a couple of lovely fillies [lot 30 and lot 155] by Night Of Thunder (Ire) as well.

“There is also an Adlerflug (Ger) filly [lot 163] there and, of course, there are very few of them left. The other one I really like is the New Bay (GB) [lot 267] filly. It was also the last French crop of Wootton Bassett and we have plenty of those to sell as well. Obviously, many people have said that, not only our Wootton Bassetts, but this current crop, is the best they have seen. That is logical as the mares he got improved.”

De Chambure added, “There are a lot of Americans here. Arqana organised a plane for them and it helps. These days, with so many sales on, it can be hard to get people's attention. But if you make it easier for people to travel, it makes a difference. If they come once, the likelihood is that they will come back.”

Nothing keeps the clients coming back to Arqana better than results on the track. The sale is set for takeoff at 2 p.m. on Saturday and it promises to be one-way traffic.