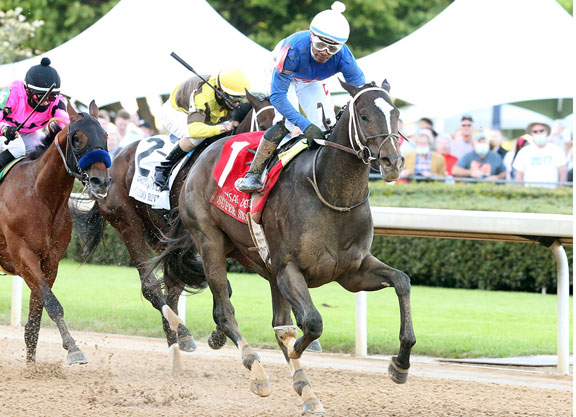 Super Stock (Dialed In) emerged in “fantastic” shape from his victory in Saturday's GI Arkansas Derby at Oaklawn, Steve Asmussen, the colt's Hall of Fame trainer, said Sunday morning. The bay is scheduled to be flown early this week to Kentucky, Asmussen said, where the colt will join the trainer's string at Churchill Downs to begin preparing for the GI Kentucky Derby May 1.

Bought for $70,000 as a Keeneland September yearling, Super Stock gave Asmussen his fifth Arkansas Derby victory and is co-owned by Asmussen's 79-year-old father Keith. The colt received his early schooling at the family's famed El Primero Training Center near Laredo, TX and gave Steve Asmussen's oldest son Keith his first stakes win as a jockey in August's Texas Thoroughbred Futurity at Lone Star Park. Asmussen has yet to win the Kentucky Derby with 21 starters.

In addition to his father, mother, wife and three sons, Asmussen said his mother-in-law and two sisters-in-law were among those present to cheer the family horse Saturday.

“Can't even remember the last time we were all at the same race,” an emotional Asmussen said following his record 95th career Oaklawn stakes victory. “Meant to be.”

Bob Baffert was noncommittal after the race about a trip to Louisville for Arkansas Derby third finisher Concert Tour (Street Sense), who suffered his first loss in four career starts.

“We'll see how he works back,” Baffert said. “Churchill, I don't like to run there unless they're going to be really live. We'll see how he comes out of this race and see how he trains forward. I didn't really want a hard race out of it, but we still wanted to win. I've won Derbies off of losses. You learn about your horse and see if there is improvement to be made. The horse will tell us.”