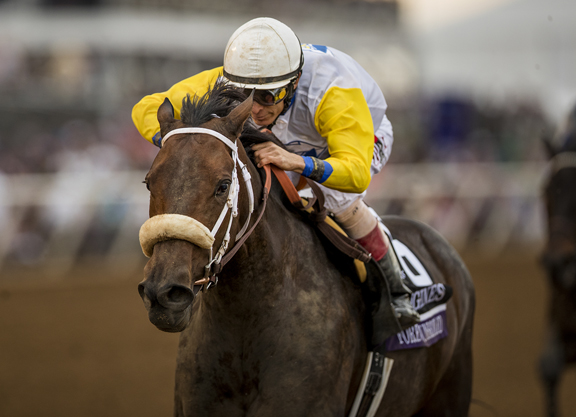 The sweet taste of victory had been somewhat soured for owner Charles Fipke, however, due to a prior California Horse Racing Board (CHRB) stewards double jockey fee ruling which required him to pay Joel Rosario $100,000 as a result of the victory.

A Los Angeles County Superior Court judge upheld that ruling, but, on Monday, it was reversed in a 19-page California 2nd District Court of Appeals ruling.

“They exceeded their authority, even though they've been doing it for a long time,” said Darrell Vienna, who represented Fipke, of the CHRB stewards double jockey fee decision.

Vienna said that “scores” of prior double jockey fee rulings are usually for much less significant races, and typically result in a nominal fine of between $500 to $1,000.

“That's why Mr. Fipke wanted to go forward,” said Vienna. “He wasn't just fighting for himself, but he was trying to give the owners some understanding of what their obligations, and the limits of those obligations, were.”

As a result of the appeals court ruling, the CHRB is ordered to return those costs to Fipke, a noted diamond explorer.

CHRB spokesperson Mike Marten said that the board has no comment on the ruling.

In a nutshell, the case hinged around language in section 19500 of the CHRB rules, which delineates when jockeys are entitled to their riding fees and/or their mount fees if they're removed from an intended ride.

“Although section 19500 grants CHRB considerable discretion to determine the circumstances under which a jockey removed from a mount is entitled to a riding fee, it imposes one implicit condition on the exercise of that discretion: the removal must occur after 'scratch time,'” according to the appeals court decision, filed Monday.

“Had the Legislature not intended to impose such a condition, it could have provided a single direction to CHRB to establish the circumstances under which a jockey is entitled to receive a riding fee and/or a mount fee when removed from a mount,” the decision continued.

“The Legislature instead chose to direct CHRB to separately address situations where a jockey is removed before and after scratch time; only in the latter circumstance did it specify the jockey might be entitled to a riding fee. The clear implication of this decision is that the Legislature intended jockeys removed from their mounts prior to scratch time would not be entitled to riding fees.”

The CHRB argued that the statute is “irrelevant because it concerns jockey compensation, whereas here, the stewards awarded the double jockey fee as a penalty for Fipke's misconduct,” according to the appeals court ruling.

During the prior superior court hearing, however, the CHRB had argued that the double jockey fee was “not a penalty” to punish Fipke, but rather an award to Rosario to “compensate him” for losing the mount.

“We agree with CHRB's initial position, as do Rosario and Fipke. For the reasons we discuss below, the double jockey fee award was not a penalty,” Monday's appeals court decision states.

In a text message Monday, Ron Anderson, Rosario's agent, wrote that neither he nor Rosario had a comment about the decision.

In a press release Monday, attorney Carlo Fisco, who also represented Fipke, wrote: “The law appeared to be clearly and straightforwardly in Mr. Fipke's favor. Therefore Mr. Fipke must be commended for staying the course in seeking a fair and just decision. Owners now have a level of protection going forward and the industry also stands to gain from the clarification supplied by the appellate court.”

In the release, Fipke stated: “I pursued this case because I believe that horse owners have the right to make decisions regarding their horses and ensure that I and other horse owners are neither denied that right nor subjected to arbitrary and unfair sanctions for exercising that right.”