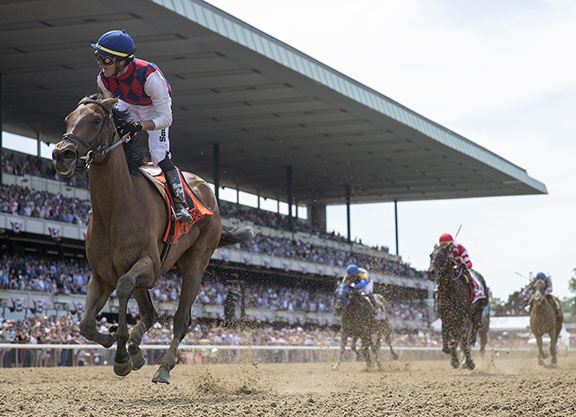 A pair of talented half-sisters owned and bred by Three Chimneys Farm are nearing a return to action.

“She came back jammed up after her race in Pennsylvania, had a little filling in her ankles and was a little off behind,” Three Chimneys Vice Chairman Doug Cauthen said.

“It made it an easy decision to just give her a break and not go for the Breeders’ Cup. It was very minor–no surgery–she just needed some R&R. She received a clean bill of health from Dr. [Larry] Bramlage and Chad’s been real pleased with the way she’s going.”

Guarana kicked off her career at the age of three with a blowout maiden win in the Keeneland slop last April prior to her three aforementioned attempts at the highest level, including a stakes-record setting performance with a career-best 99 Beyer Speed Figure in the Acorn.

Is there a timetable for her return or some early season targets in mind yet?

“The best thing with her is to let her lead you there because I think the patience that she was afforded as a young horse worked out well,” Cauthen responded.

“We will let her tell Chad and Chad will tell us,” Cauthen added with a laugh.

The dark bay nearly overcame a horrific stumble at the start in the GII Adirondack S. at Saratoga most recently Aug. 4. She stayed on for third that day behind next out GI Spinaway S. winner Perfect Alibi (Sky Mesa) after leading in the stretch.

Magic Dance earned her ‘Rising Star’ badge beneath the Twin Spires on debut just a day before Guarana’s runaway win on the GI Belmont S. undercard.

“When she went to her nose at the start at Saratoga, she scraped a ton of skin off her forelimb–she grabbed herself pretty bad and basically broke the skin from the contact-and had a deep bone bruise from the blow as a result,” Cauthen said.

“She just needed a break and got one. She was a powerful, impressive filly last year, but she has grown and lengthened out quite a bit. Steve’s really happy with her progress and has gotten a big bottom into her. He’s just building up stamina with her and letting her lead him to a start, which he hasn’t officially identified yet, but I think we could see her back at the races in March.”

Guarana and Magic Dance are both out of the winning Distorted Humor mare Magical World, a Phipps Stable-bred daughter of GI Breeders’ Cup Distaff heroine Pleasant Home (Seeking the Gold).

Her 2-year-old colt by Pioneerof the Nile brought $2.1 million from bloodstock agent Mike Ryan on behalf of E Five Racing at last year’s Keeneland September sale. Three Chimneys has remained in as a partner on the colt, per Cauthen.

Barren for 2019, the 10-year-old Magical World was bred to Horse of the Year and Three Chimneys resident Gun Runner for the 2020 season.