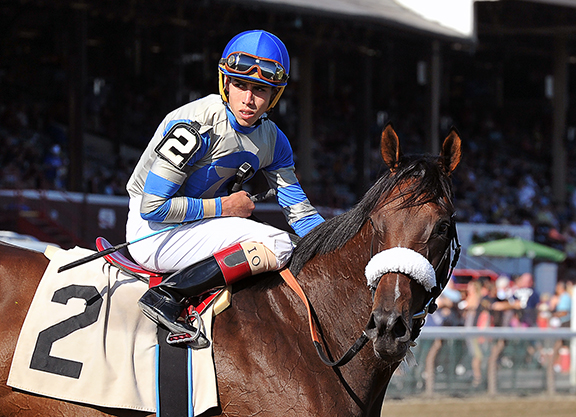 Most people would be surprised to hear that two talented New York-bred fillies grew up on 80 acres just outside of Camden, South Carolina, but that is the case for both Wonder Gal (Tiz Wonderful) and Quezon (Tiz Wonderful), who were bred and raised at Bill and Jane Moriarty's Apache Farm. The Moriartys hope to have another talented New York-bred filly in Wonder Gal's yearling half-sister by Palace Malice, who will be offered as Hip 9 at the upcoming Fasig-Tipton July sale.

“Her physical is very good,” Jane Moriarty said of Hip 9. “She has a great pedigree and a really good brain. She is beautiful, so we are hopeful. You never know about the sales, but we think she is going to do well. It seems other people think so, too.”

Out of the unraced Dixie Union mare Passe, Hip 9 is a half-sister to Wonder Gal, who was tabbed a 'TDN Rising Star' after romping by 14 1/2 lengths in her career bow in the 2014 Lynbrook S. at Belmont (video). She went on to win two more stakes and place in four Grade Is, including a third to future champion Take Charge Brandi (Giant's Causeway) in the 2014 GI Breeders' Cup Juvenile Fillies. Passe, a daughter of SW and GSP Gal on the Go (Irgun), is a half-sister to GISW Force the Pass (Speightstown) and MGSW Social Queen (Dynaformer).

Hip 9 is from the first crop of 2013 GI Belmont S. and 2014 GI Met Mile winner Palace Malice (Curlin) and Moriarty is quite pleased with the result of her stallion choice.

“We thought Palace Malice was a good choice because of Curlin and he is a big-bodied horse like the filly's mother,” Moriarty said. “We like first-year stallions and the cross was really good. We are very pleased with what we ended up with. She is very correct and a big girl.”

The bay filly will be consigned to the sale by Jim Perrone's Perrone Sales, which is based in North Carolina. Perrone's consignment consists of a total of four horses, but only one is from Apache Farm.

“Jim Perrone came to our open house when we were standing a stallion and that's how we got to know him,” Moriarty said. “We've been with him the whole time we have been doing this and we are very pleased with how things have turned out.”

The Moriartys have not been “doing this” all that long. While the couple has been breeding horses since the 1970's, they got their start in the show horse world, breeding Warmbloods, and only switched over to Thoroughbreds about 10 years ago.

“We lived in New York for a long, long time,” Moriarty said. “We've been down here [in South Carolina] about 20 years now. We originally started out in the horse business in New York, breeding and raising show horses. We switched to Thoroughbreds around 2008. The bottom dropped out of the market and show horses were not selling well, so we took that opportunity to make a change.”

The Moriartys foal their mares in New York and as soon as they are able to travel, the mares and foals are shipped to South Carolina to be raised by Bill and Jane at Apache Farm.

“The incentive program [for New York-breds] is fantastic and my son happens to have a farm up there, so it's a no brainer,” Moriarty said. “My son takes care of the mares for those nine months and I go up and foal them at his farm. As soon as the foals are born, we bring them down here to South Carolina. The mares go to Kentucky with their foals to be bred back and then return to South Carolina. Once the foals are weaned, we ship the mares back to New York within the 90-day period [which is required for the next foal to be a New York-bred].”

Apache Farm is a boutique operation with just six mares, but in just a decade in the industry, it has managed to make the most of its stock, producing a pair of talented fillies on the New York circuit. In addition to the aforementioned Wonder Gal, who was named New York's champion 2-year-old filly in 2014 and earned over $900,000, Apache Farm has produced five-time stakes winner and MGSP Quezon.

“Wonder Gal won over $904,000 and ran in the Breeders' Cup twice, finishing third once,” Moriarty said. “Quezon won [over] $750,000. She was the only foal out of Kalookan Dancer (Olympio), who died of dystocia. It has been very exciting watching them win and how well they have done. Now they are both broodmares. Wonder Gal just had a Pioneerof the Nile colt and, the last I heard, Quezon is being bred to Gun Runner.”

It is clear in speaking with Moriarty that the horses she breeds are her pride and joy. She and her husband spend everyday working with the horses on their farm, doing their best to continue their tradition of raising quality horses.

“I've been in breeding for like 100 years and my sole interest is breeding quality babies that can go on and do what [Quezon and Wonder Gal] have done,” Moriarty said. “That's my goal. We are trying very hard to continue that goal and it's pretty hard when you are an itty bitty operation like us.”

The Fasig-Tipton July sale gets underway at 4p.m. Monday, July 9 with the Horses of Racing Age Sale and continues Tuesday, July 10 at 10a.m. with the Yearling Sale.