Another Joel For Benbatl As Newmarket's Track Record Falls 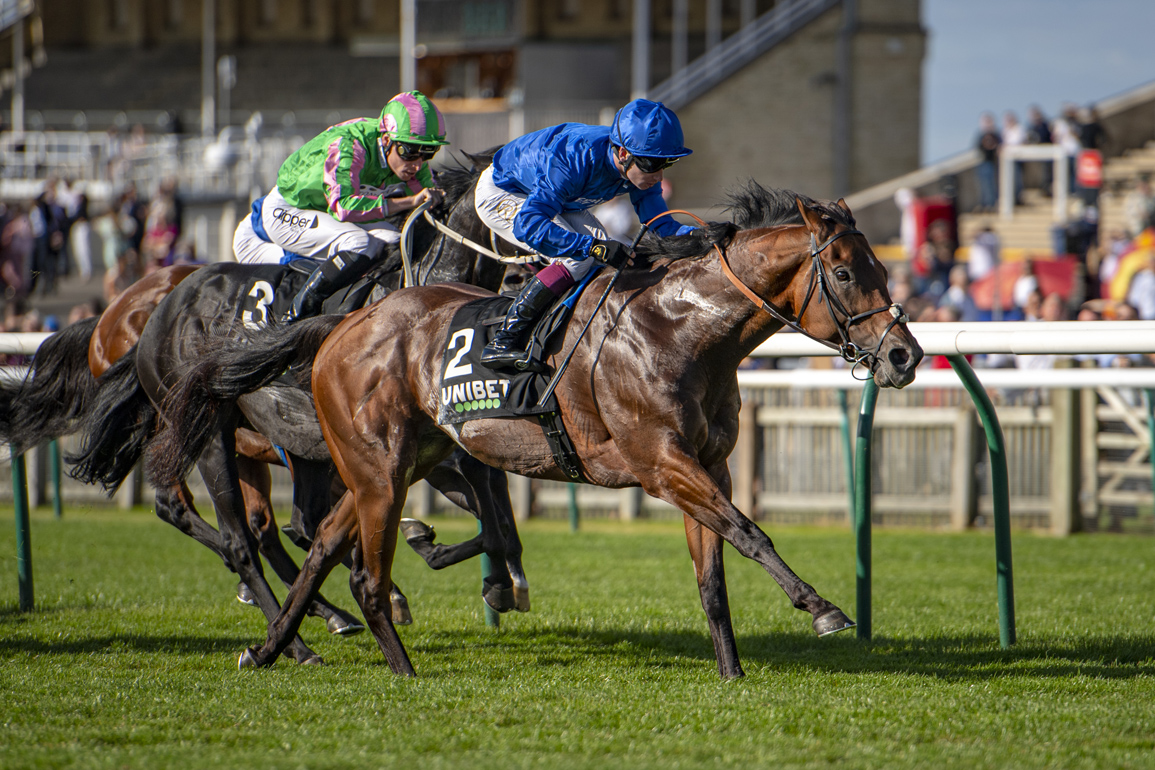 Confirming his love for Newmarket's Rowley Mile once again on Friday, one of the oldest TDN Rising Stars around Benbatl (GB) (Dubawi {Ire}) showed up in uncompromising mood to break Kameko's track record over the 2000 Guineas track and trip when repeating his 2019 success in the G2 Joel S. Third behind that Classic hero in this 12 months ago, Saeed bin Suroor's veteran warrior had been a short-head second to Lavender's Blue (Ire) (Sea the Stars {Ire}) in Goodwood's G2 Celebration Mile having blown the start on his only subsequent outing Aug. 28. Sharper for that comeback, the 13-8 second favourite tracked the forcefully-ridden Pogo (Ire) (Zebedee {GB}) from the outset and eventually had his measure a furlong from home. As the 11-8 market-leader Master of the Seas (Ire) (Dubawi {Ire}) made a second challenge up the stand's rail having had to switch around the front pair two out, Benbatl and Oisin Murphy were already beyond recall. At the line, the 7-year-old held a 3/4-of-a-length verdict over Pogo, with Master of the Seas half a length behind in third on his first start since being edged out in the Guineas in May. “He's been a machine for a number of years,” Murphy said. “He gave me my first ever Royal Ascot winner. We're in 2021 now and he's still winning group twos. He is the horse of a lifetime.”

Remarkably, Benbatl has only raced on this home strip on three occasions, winning this twice and finishing third in the 2017 G3 Craven S. Successful in Royal Ascot's G3 Hampton Court S. that season, he has since won eight group races including the G1 Dubai Turf, G1 Grosser Dallmayr Preis and G1 Ladbrokes S. in 2018 as well as finishing two-lengths runner-up to Winx (Aus) (Street Cry {Ire}) in the G1 Cox Plate that same year. That defeat, as well as the aforementioned Dubai Turf success stand out among his exploits, as does his five-length success in this two years ago which was enough to place him in the upper echelons of that year's class. “When he won this race in 2019 he ran to a rating of 125,” his rider added. “He's one of the best horses I've ridden and I'm thrilled that we've got him back on track. They've done a super job at the stable to produce him year in, year out.”

Saeed bin Suroor is pondering options now. “He is the horse that is leading the stable,” he said. “We follow him really! We have had a lot of fun with him. We'll keep the options open for him. It could be Champions Day, but we'll talk to Sheikh Mohammed and make a plan for him. It could be the Breeders' Cup, we'll see. It depends on the ground at Ascot, as he doesn't like it soft.”

Benbatl was the first foal out of Nahrain (GB) (Selkirk), who captured the GI Flower Bowl Invitational and G1 Prix de l'Opera and was second in the GI Breeders' Cup Filly and Mare Turf. She has since produced the useful filly Fooraat (Ire) also by Dubawi, who was second in the Listed Snowdrop Fillies S. and third in the Listed Rosemary S. on this card. Nahrain is out of Bahr (GB) (Generous {Ire}), who took the G2 Ribblesdale S. and G3 Musidora S. and was placed in the G1 Epsom and Irish Oaks and the Flower Bowl.

Bahr is also responsible for the dual listed winner Baharah (Elusive Quality) and the dam of this year's G2 Railway S. winner and G1 Phoenix S. third Go Bears Go (Ire) (Kodi Bear {Ire}), who lines up in Saturday's G1 Middle Park S. with live claims. From the family of last year's G3 Palace House S. winner Far above (Ire) (Farhh {GB}), Nahrain's 2-year-old filly is a full-sister to Benbatl and Fooraat, while she also has a yearling colt by Muhaarar (GB) and a filly foal by Kingman (GB).