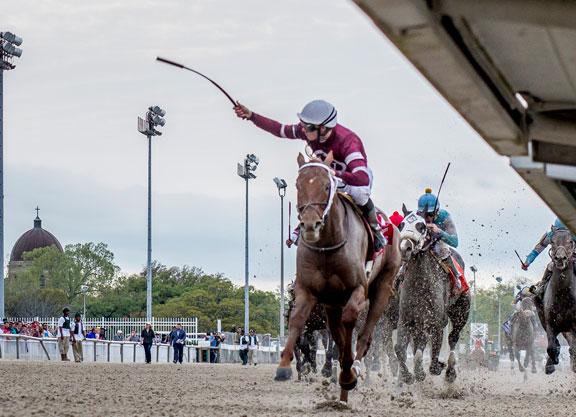 The Winchell Family have teamed with trainer Steve Asmussen for many a big-race success over the last several seasons, the vast majority of those courtesy of the sensational Tapit. It is, however, a son of Candy Ride (Arg) that is taking the Winchells and partners Three Chimneys Farm down the Triple Crown trail in 2016, and in Gun Runner, the team will head up to Churchill Downs in the not-too-distant future with an improving horse and a live chance in the GI Kentucky Derby in six weeks' time.

Having never raced at a distance shorter than eight furlongs, Gun Runner overcame a slow pace in his Sept. 11 debut going the one-turn mile beneath the Twin Spires and hit the line hard to graduate by 3/4 of a length, then successfully took his show across Interstate 64 to Keeneland, where he knocked out a first-level allowance trying a two-turn route for the first time Oct. 17. He took the next logical step in a sloppy renewal of the GII Kentucky Jockey Club S. Nov. 28 and came calling from close range to lead into the final eighth of mile, but weakened from there to finish fourth to Airoforce (Colonel John), Mor Spirit (Eskendereya) and Mo Tom (Uncle Mo) in what has become one of the more productive races of all of 2015. On the surface, the task facing Gun Runner in his seasonal return in the GII Risen Star S. Feb. 20 looked tough, but he drove home a half-length winner from Forevamo (Uncle Mo) and it was onwards and upwards Saturday in the Big Easy.

Drawn gate one for this second start of the season, Gun Runner took full advantage and was perfectly covered up from third as Candy My Boy (Candy Ride {Arg}) led into the first corner in advance of Dazzling Gem (Misremembered), who entered the Derby on the back of two impressive scores in Arkansas. Still under a long hold from Florent Geroux as the half-mile went up in a modest :48.24, Gun Runner was asked to come after Candy My Boy leaving the three-eighths marker and ambled upside the longshot leader as they neared the top of the long Fair Grounds stretch. Shaken up at the head of the lane, Gun Runner got a couple left-handed whips at the three-sixteenths pole, jumped back onto his left lead about 150 yards from home and held sway as Tom's Ready made belated progress into second. Dazzling Gem looked destined to be off the board a furlong down, but rerallied inside of Forevamo to be a respectable third.

“The good thing is he's very easy to manage,” explained winning jockey Florent Geroux. “He is so easy to manage and has so many gears. He settles really nicely and when you ask him to go, he has a nice turn of foot. It's great [to have a Derby horse]. Hopefully we can make a nice run the first Saturday in May.”

The hard-luck story of the race was favored Mo Tom, who found himself in a stretch predicament similar to the one he experienced when an unlucky third in the Risen Star. Towards the back of the Louisiana Derby field early on, the scopey dark bay caught the eye while advancing on the turn, but jockey Corey Lanerie opted for an inside run in the stretch, and the colt was short of room on two occasions behind the weakening Candy My Boy. He finished well once out of jail, but could do no better than fourth. Trainer Tom Amoss did not mince words.

“I really thought he ran a prepared race and a great race, I was just puzzled as to why Corey went down to the rail,” said Amoss, who took the jockey off Crescent City Oaks winner Our Lady Allie (Private Vow) two races later. “I just hope he didn't hurt my horse. I am surprised. There were other choices and I don't understand why he did what he did. Watching this was like going to the schoolyard and watching your kid get beat up by another kid. It's so hard to watch something like that with all the preparation we do.”

For his part, Lanerie was willing to shoulder the blame.

“It was a bad ride and totally my fault,” he courageously admitted. “He came underneath me and I had more horse than I knew what to do with and I got him in trouble and went inside when I shouldn't have. I doubt they'll let me sit on him again. He's a great horse.”

Gun Runner is the first produce for his dam, a half-sister to Horse of the Year Saint Liam (Saint Ballado), who annexed the GII Hill 'n' Dale Molly Pitcher S. in 2011 before being purchased by Ben Leon's Besilu Stables for $3 million from the Ned Evans dispersal at the Keeneland November sale. Quiet Giant is the dam of a 2-year-old filly by Malibu Moon, a yearling Tapit filly and was most recently bred back to that leading sire.