Annals of Time Returns to Big Stage in Sword Dancer 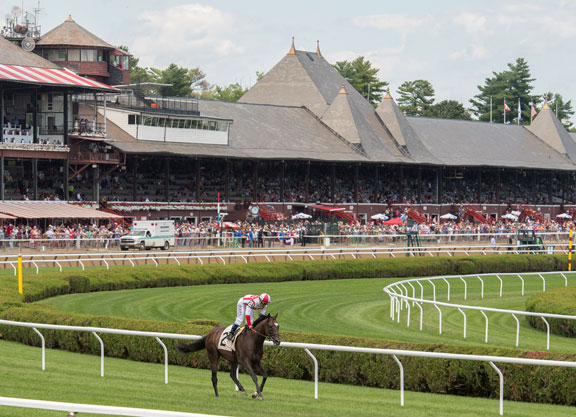 He doesn't run often, but when he does, he's usually brilliant, and Annals of Time (Temple City) will shoot for his second Grade I triumph, over 2 1/2 years removed from his first one, in Saturday's GI Sword Dancer S. at Saratoga.

Debuting with a sharp success in November of 2015, the bay had his most rigorous campaign thus far when running three times in 2016, finishing third in the GIII Hill Prince S. before rallying from well back to capture the GI Hollywood Derby at Del Mar. Appearing just once in 2017, he annexed a Belmont optional claimer. Then came a near 21-month layoff, but the Chad Brown trainee returned no worse for the wear, flying late to be second in another Big Sandy optional claimer June 7 and blowing away a similar field by 4 1/2 lengths over the local turf July 24. That race, run over 1 3/16 miles, was the longest Annals of Time has traveled so far, and he'll try to stretch his devastating closing kick out to the 12-furlong distance of the Sword Dancer.

“A mile and a half will be a test for him,” Brown told the NYRA notes team. “He's never run in a three-turn race before. I'd prefer there to be some pace in the race, but he has a really good turn of foot and he's going need to.”

The first, second, fourth and sixth finishers from the local prep for this, the GII Bowling Green S. July 27, will return, led by upset winner Channel Cat (English Channel). Capturing a pair of stakes as a sophomore, the Calumet Farm homebred was off the board in his first two attempts this season before running a close third in the GI United Nations S. June 22 at Monmouth. Setting the pace in the Bowling Green, he gamely repelled several challenges late to score at over 13-1.

“I think he's consistent with a lot of English Channels. He had some success at 2 and 3, but he really improved at 4 and I think he will continue to improve,” said trainer Todd Pletcher. “I think for the most part [offspring of English Channel] tend to peak in their 5-year-old year in a lot of cases. And this is a horse we've always liked. I kind of called him as a 2-year-old our sleeper horse that would hopefully develop into a top-class older horse and he's right on the verge of that.”

One of those challenges came from runner-up, the Chilean Horse of the Year Ya Primo (Chi) (Mastercraftsman {Ire}), who was making his North American debut. Prior to that, the gray had reeled off three straight comprehensive victories in South America, including a pair of Group 1 triumphs, before being sent to Brown.

“He's been training particularly well since and we're looking to running in the Sword Dancer,” said his conditioner. “It was always our plan.”