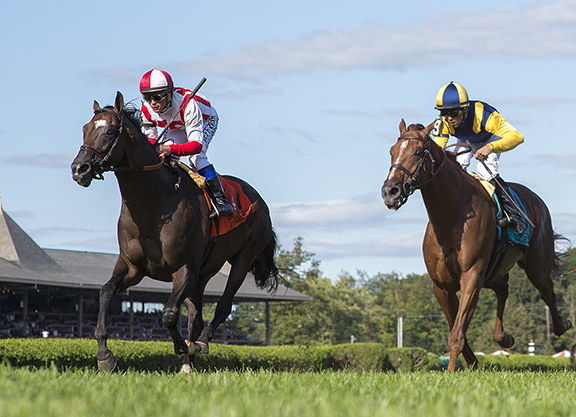 Nearly three years removed from his first Grade I victory in the 2016 Hollywood Derby, Annals of Time (Temple City) returned to those heights with a hard-charging defeat of 2017 champion Sadler's Joy (Kitten's Joy) in Saturday's GI Sword Dancer S. at Saratoga. It was a gap off to Channel Cat (English Channel) in third. With the victory, Annals of Time earns an expenses-paid berth in the GI Breeders' Cup Turf at Santa Anita Nov. 2.

A firming favorite to be off at just a shade over 5-2, Annals of Time was taken in hand and settled third-last inside of Sadler's Joy for Javier Castellano, who elected to continue his partnership with the chalk after also teaming with Sadler's Joy in his six most recent trips to the races. Castellano would have been happy with the lay of the land, particularly through solid opening fractions of :23.36 and :47.96 set in tandem by the well-bet Chilean Horse of the Year Ya Primo (Chi) (Mastercraftsman {Ire}) and 2018 Sword Dancer runner-up Channel Maker (English Channel). Channel Cat raced in the second flight of horses while drafting in behind Channel Maker passing the stands first time round. Annals of Time was content to race with positions unchanged through the next internal half-mile, even allowing Sadler's Joy–ridden far closer to the pace than usual–to get first run with three-eighths of a mile to travel. Sadler's Joy traveled well into the lane, circling up outside of the two 'Channels' to be four wide under a head of steam into the stretch, but Castellano had that move covered, as he switched Annals of Time off heels, was roused to the lead outside of Sadler's Joy nearing the sixteenth pole and held sway late. The wins were the record-equaling third in the race for both Castellano (2009, 2016) and trainer Chad Brown (2013, 2016).

“When he tipped out, I thought we had a good chance because he has a really good, strong closing kick,” said Brown, winning his fourth race on Travers Day. “But it was a little tight near the finish. I'm glad he got up in time.”

Laid up after defeating stablemate and 'TDN Rising Star' Beach Patrol (Lemon Drop Kid) at Del Mar in 2016, the bay was a Belmont allowance winner from a single start at four before going missing for 22 months. Second to loose-on-the-lead 'Rising Star' Gidu (Ire) (Frankel {GB}) over a mile trip that was always going to be too sharp at Belmont June 7, Annals of Time decimated a local allowance field by 4 1/2 lengths over a mile and three-sixteenths July 24.

Brown gives credit where it is due for Annals of Time's success despite the absences.

“It's been a real team effort. Nick de Meric down in Ocala picked him out as a baby, and every time he has gone to the sidelines, he's gone to rehab with him and his team. He sent him back to us, now as a 6-year-old, in fine shape. We finally have had an uninterrupted training schedule and campaign with him. I'm just so grateful to have him back healthy.”

One of three top-level winners for his Spendthrift-based sire (Miss Temple City, Bolo), Annals of Time–an $80,000 Fasig-Tipton October yearling–is out of a winning half-sister to a pair of black-type horses and his deeper female family includes MGISW Hollywood Story (Wild Rush). Annals of Time is the last listed produce for Lemon Haze.