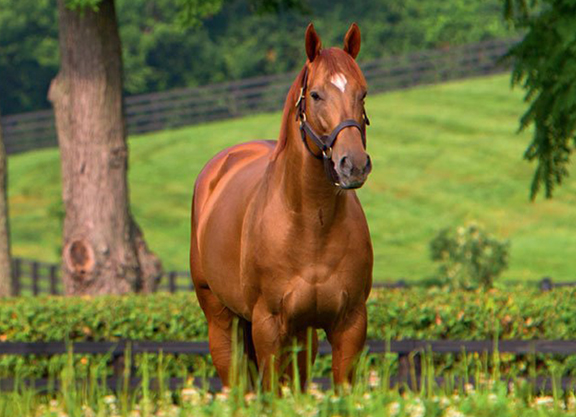 Animal Kingdom (Leroidesanimaux {Brz}–Dalicia {Ger}, by Acatenango {Ger}), the 2011 GI Kentucky Derby winner and Eclipse Award-winning 3-year-old and hero of the 2013 G1 Dubai World Cup, will be relocated from Darley’s Kentucky base to join the stallion ranks at the Japan Bloodhorse Breeders’ Association. Darley’s Darren Fox confirmed the news to the TDN.

The chestnut, bred and raced by Team Valor, was a gallant second to dual Horse of the Year Wise Dan (Wiseman’s Ferry) off an eight-month absence in the 2012 GI Breeders’ Cup Mile and the following month, it was announced that Arrowfield Stud had acquired a majority interest in the stallion, with an eye on beginning his stud career in September 2013. Following his victory in the World Cup, it was announced that Darley had acquired an interest in Animal Kingdom, enabling him to shuttle to Kentucky.

A service fee has yet to be announced.