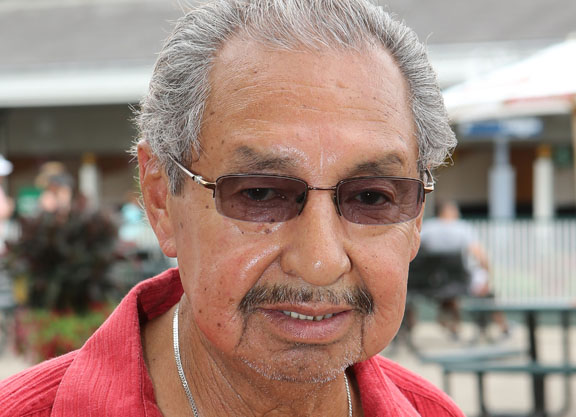 Angel O. Montano Sr., a longtime Kentucky-based trainer, died Oct. 1. The Churchill Downs publicity department confirmed the death, noting in a Twitter posting that his passing coincided with the date of his 80th birthday.

Daily Racing Form reported the cause of death as numerous health issues complicated by a recent hospitalization for COVID-19.

According to a 2010 profile in the Evansville Courier & Press, Montano arrived in Louisville at age 17, taking a three-day bus ride from his native Mexico City after his contract as a jockey was purchased by a Kentucky-based owner. But he was hurt in a spill while galloping a horse in the morning and never rode in a race.

Montano rose through the ranks on the backstretch and in 1961 started training on his own, earning a reputation for being able to bring out the best in cheaper horses. He was admired and respected by backside employees and horse owners alike for treating his animals and other people with dignity and respect.

On the 1995 GI Kentucky Derby undercard, the Montano-trained Goldseeker Bud, a 20-1 long shot, upset the previous year's Derby champ, Go For Gin, in the GIII Churchill Downs H. It was the only graded-stakes score of Montano's nearly 60-year career.

“I can't ask for any better,” Montano told the Courier & Press in 2010.”I've got my wife and seven kids, who all graduated from college and are doing great. And I've got my horses and friends. The racetrack has been good to me. The horse business can be good to me. It's been a good life.”

Visitation hours are Oct. 7 from 2-8 p.m. at Ratterman Brothers Funeral Home, 12900 Shelbyville Road in Louisville (this is the East Louisville location; please note there are two Rattermans locations in the city). A funeral service will be held Oct. 8 at 10 a.m., with details to be posted here.

Montano's family is asking for memorial gifts in his honor to be donated to the Backside Learning Center at Churchill Downs.