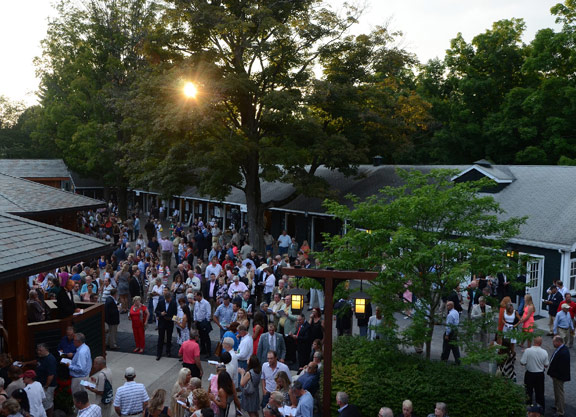 Anderson Farms returns to the Fasig-Tipton Saratoga Sale for the first time since 2010 when it sends hip 153, a filly by Street Cry (Ire), through the sales ring Tuesday evening. It will be a bittersweet moment for David Anderson, who took over the farm after the passing of his father Robert in 2011. Although the farm has been selling at Keeneland and other Fasig-Tipton sales, this will be Anderson Farms first time returning to the Spa since David took over the reins.

“For me, personally, [returning to Saratoga] means a lot,” Anderson said. “I grew up in Saratoga. We always had a house there for the month of August and I really spent my summers there racing and, of course, going to the sale.”

Anderson Farms, which was established by Robert Anderson in 1969, is located in St. Thomas, Ontario. Historically, Anderson Farms has had a great deal of success in upstate New York. The operation topped the sale in 1985 when National Assembly, a colt by Danzig, went to BBA Ireland for $2.5 million, and again in 2001 with Appeleby Gardens (A.P. Indy), a subsequent GISP, who fetched $2 million from Eugene Melnyk.

Thursday night, the late Robert Anderson will be inducted into the Canadian Horse Racing Hall of Fame as a Thoroughbred Builder. He served as a director of the Ontario Jockey Club for 25 years, president of the Canadian Thoroughbred Horse Society, board member of the Thoroughbred Owners and Breeders Association and was a member of The Jockey Club of Canada and the Ontario Racing Commission. David Anderson noted that his father's enduring legacy, which will be celebrated Thursday night, has made him even more keen to maintain Anderson Farm's standards of quality into the new era.

“It's a pretty special night for all of us at Anderson Farms,” Anderson said of the induction. “I owe everything to my father. He paved the road and built the brand and allowed me to just come in behind that legacy. I hope that we can continue to do him proud.”

Anderson Farms currently has about two dozen mares on the farm and mostly sell yearling stock, but occasionally keep a few to race. Anderson said, especially since the recent resurgence in interest and funds being allocated at Woodbine and towards Canadian restricted races, the farm's location in the Great White North is a breeding advantage.

“We want to be known as a boutique Canadian-bred nursery,” Anderson explained. “I feel that there's still an opportunity in Canada with the recent announcement of Woodbine getting a casino, I think that will fuel the Ontario-bred program again. I want to be one of the top players standing at the mailbox looking for some breeders awards. We breed to stallions in Kentucky, but all of our horses, for the most part, are Kentucky-sired, but are bred in Canada and wear the Canadian-bred badge, so they're eligible for all the restricted races up here, which allows buyers close to the boarder great position if they want to have a horse in a restricted program. There's some great stakes programs up here and great rewards.”

Anderson Farm's offering is out of Pinafores Pride and is from a female family that goes back to the third dam, Fleet Courage. The farm purchased Fleet Courage for $9,200 at the 1992 Keeneland November Sale. Anderson Farms bred and campaigned SW and GSP second dam Pinafore Park and bred unraced dam Pinafores Pride. The Street Cry filly is a full-sibling to MGISW Southdale. Anderson believes the filly is one of the best the farm has ever produced and noted that he's waited for that type of outstanding individual to bring back to Saratoga.

“Saratoga is a really, special boutique sale and you have to have all the stars aligned from the physical to the page,” he explained. “We felt the last couple of years, we just didn't have the right horse. This filly is by Street Cry and they're not making any more Street Cry fillies. She's a tremendous, tremendous individual. She's, without a doubt, the best yearling to come off our property. I'm very excited about trying to sell her at a sale like Saratoga.”

Anderson added that the farm is returning to the standards of quality that was previously seen under the care of his father.

“I'm pleased with what we're building,” Anderson said. “It doesn't happen overnight and it's a long process, but at the end of the day, we want to have a viable operation and we want people to know they can come and shop Anderson Farms and get a quality animal that's going to be successful.”