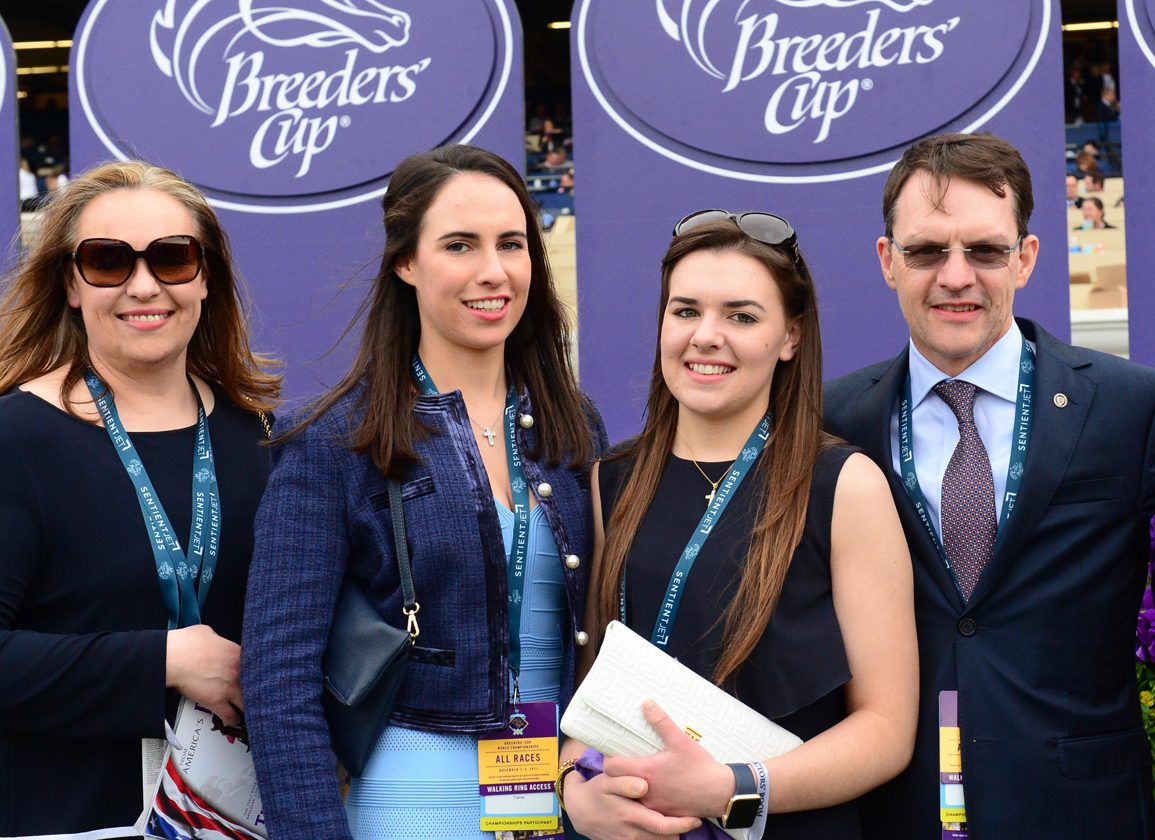 Racing fans who have always had a bit of trouble believing in the magic that goes on behind the gates at Ballydoyle or at Owning Hill need not look any further than the result of last week's Ballyhane S. at Naas.

There are some people, so hell-bent in their views that the sole reason why Aidan and Joseph O'Brien have conquered some of the greatest prizes in racing, is because they have all the best horses at their disposal.

It sounds somewhat plausible, doesn't it? Aidan and Joseph have been sent the best, therefore they are the best, right? Wrong.

Aidan launched his training career by winning a slew of races with moderate horses and Joseph, who sent out his 1,000th winner at the Curragh on Saturday, essentially started out with a string of jumpers. The Ballyhane was yet another example of the O'Brien family pulling a rabbit out of the hat.

The race was won by Voce Del Palio (Ire) (Bated Breath {GB}), carrying the colours of Annemarie O'Brien, whose daughter Ana rightfully points out that the big-race hero was there for everyone else to buy at the Goffs Sportsman's Sale the previous October. 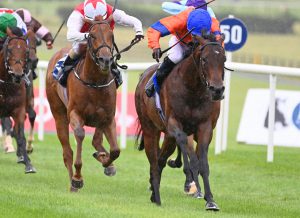 Instead, Voce Del Palio was led out of the ring unsold at 14,000gns and that's not even the most interesting part of this story.

It is less than three years ago when Howson & Houldsworth Bloodstock signed for the Juddmonte mare Caption (GB) (Motivator {GB}), in foal to Bated Breath, on behalf of the O'Brien family's Whisperview Trading.

With that resulting foal snaring the lucrative €300,000 Ballyhane last Monday, it's fair to say that the 7,500gns it took to secure Caption at that December Mares Sale at Tattersalls in 2019 has been paid back in spades, yet some people still refuse to believe in magic.

Ana O'Brien has immersed herself in bloodstock since suffering the horror fall at Killarney five years ago that cut short her successful career in the saddle. As well as consigning her own horses at the sales under the banner of Mount Richard Stud, she plays an integral role at Whisperview, but that's not to say that she will take any credit for the acquisition of Caption.

“I don't think so,” she says with typical modesty, before adding. “I think it was either Dad or Joseph to be honest. It was massive to win the Ballyhane and for the horse to run in Mum's colours was great as well.

“He actually went through the sales ring himself but didn't sell. It just goes to show, good racehorses can get overlooked at the sales. He was always a very straightforward horse and you could never fault him really.”

Caption ran three times for Sir Michael Soute and, while she showed promise, retired as a maiden with a rating of 65. However, being a daughter of a Derby winner out of an unraced sister [Razzle (Danzig)] to Danehill and countless other black-type horses, the pedigree was there.

Buyers may have missed the chance to buy Voce Del Palio at the yearling sales last year but it's unlikely that the same mistake will be made twice when Caption's yearling filly (lot 377) by Caravaggio walks through the ring at the Orby Sale at Goffs.

As for O'Brien, she is content with growing things organically at Mount Richard Stud while continuing to learn the ropes at Whisperview.

She explained, “I have only just started selling a few under Mount Richard Stud and I'm enjoying it. With regards to Whisperview, there's a massive team here.

“I sold four of my own yearlings in 2020, didn't sell any last year, but I have four more going to the yearling sales this year so I'm branching into that at the moment. I have two Saxon Warriors (Jpn), one filly and one colt, a Churchill (Ire) filly and a nice Ten Sovereigns (Ire) colt as well. I'm looking forward to them. I think they're nice horses so hopefully they do well.

“People might have the perception that we're not sellers but we are. We have to sell to keep the wheel turning. We're not afraid to sell the good ones as well because you can't keep everything. “I just figured that, by drafting horses under my own name and earning a reputation for selling good horses, it would be good to get that word out there. We'll see how it goes and I'm not making any major plans for the future. We'll see how we get on.

“I'm full-time on the farm and Niall Ryan is here with me. Niall is a huge benefit to us, he's brilliant. Obviously I was racing up until only a few years ago so I'm still learning and I couldn't ask for a better mentor than Niall. Between us, we're here every day and taking care of the place as best we can.”

On Caption, O'Brien added, “She has a Caravaggio yearling filly and a Starspangledbanner (Aus) colt foal. She's back in foal to Starspangledbanner as well. They're two lovely horses. The Caravaggio looks like she could be a very good filly so please God she turns out to be. She's going to the Orby Sale at Goffs. Like I said, we sell good ones as well.

“The Starspangledbanner is nice. Obviously foals can change a lot in a short space of time but, at the moment, we really like him. We're looking forward to all of her stock.”

The big-race success of Voce Del Palio in Annemarie's famous orange and blue silks is just the latest in a string of high-profile victories for the matriarch of one of the most successful racing families in history.

It was in those colours that four-time Group 1 winner Iridessa (Ire) (Ruler Of The World {Ire}) burst onto the scene by winning a Killarney on debut in 2018 before being sold privately to Chantal Regalado-Gonzalez. Her dam Senta's Dream (GB) (Danehill) has been another inexpensive purchase by the family at 14,000gns.

“It's great to see them win in our own colours but, when they go on to do well for the next person, that's also brilliant,” Ana explained.

“We're so lucky that Joseph, Donnacha and Dad are all training so, anything that doesn't get sold, they get it to train. The hope is that they can go on and make careers for themselves.”

They're not bad trainers to be able to call upon, are they Ana? But tell us, if you could pick just one, who would you rate the best of the three?

“I get a good deal with Joseph so I better say him!”

Joking aside, the success enjoyed by Whisperview in recent seasons is rivalling what Aidan, Joseph and Donnacha have been achieving on the track. The family have an unrelenting ability to produce, as well as train winners, and just like Caption, not all of the mares on the farm fetched big money at the sales.

Asked what the secret behind the success was, O'Brien said, “I suppose when you look down through the pedigrees, something might jump out at you and catch your eye.

“Going back through all of those old families, they seem to come back around at some stage. If you saw a mare who had been going to stallions that didn't suit her, that could also be of interest as, if you changed things up a bit, it might work. Now, it's often the case that it doesn't work, but sometimes you'll get lucky and it will.” 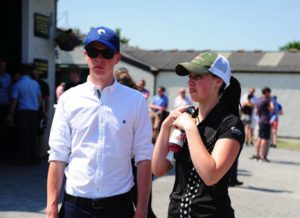 Not only do some of the horses bred at Whisperview benefit from being trained by Aidan, Donnacha or Joseph, they have also been given the best opportunity from the outset.

Whisperview utilises the Coolmore stallions, the majority of which were at one point in training with Aidan at Ballydoyle, and Ana believes that access is imperative to the success story.

“Sure there's no better stallions around,” Ana said, before adding, “It also goes back to my Mum's Dad [Joe Crowley]. He was a big fan of a bargain and would take a chance on something that someone else wouldn't.

“He was always great to buy something cheap and do well with it. Mum is a huge part of the operation and it wouldn't function without her.

“Sarah [Ana's sister] is also a massive help. She is a qualified vet and, as well as helping Joseph on the veterinary side of things on the hill, she puts a lot of work in on the stud. It's a big family effort and it wouldn't function without everyone.”

“But Granddad had his own ways and, while some people would question them, most of the time it worked.”

There are some things in life that can't be explained. The O'Brien family's Midas touch with horses, be it breeding or racing them, is one of those things. It's magic.