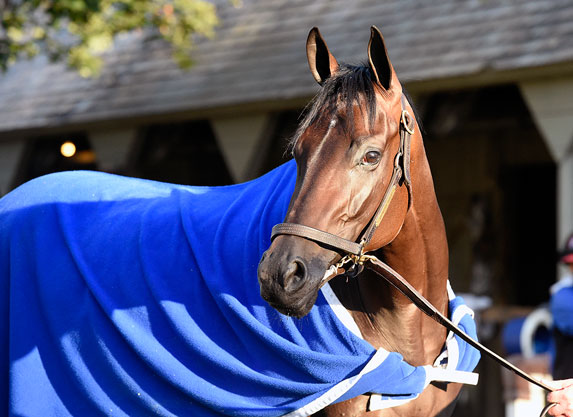 What was it, many have asked, that drew Jeff Bloom to Midnight Bisou at the 2017 OBS April 2-Year-Old Sale?

While it surely wasn't her unmet reserve from the Keeneland September Sale, where bidding stalled at $19,000, perhaps it was her three-time stakes-winning dam. Diva Delite (Repent) had yet to produce a winner, but as a racehorse she had claimed the GIII Florida Oaks and earned over $300,000.

On the other hand, maybe something in the filly's :10 1/5 breeze at the sale had caught his eye.

Bloom has been asked the question innumerable times over the past three years. There's really only one thing he can put his finger on.

“At the end of the day, it was really her presence,” Bloom said. “She had a way about her–her eye, such a smart, keen, personal, friendly touch about her. I was just drawn to her from the second I laid eyes on her. At the breeze show, she really leveled out and had such an efficiency of motion about her that made it clear there was more there. This is the type of horse that you think you can go on with. Of course, you never know for sure, but, as it turns out, it worked out.”

It would have been impossible for anyone to have predicted the ride on which Midnight Bisou would take Bloom, his family and his partners. But now, after a four-year campaign, the daughter of Midnight Lute will sell at the Fasig-Tipton November Sale as a five-time Grade I winner, an Eclipse champion and the highest-earning dirt mare of all time.

“The Santa Anita Oaks was a huge accomplishment,” Bloom said. “To win as dominantly as she did was really one of those things that gives you goose bumps. At that point, we thought, 'Wow, we've got arguably one of the best fillies in the country and it looks like there's no stopping us now.'”

Midnight Bisou wrapped up her 3-year-old season with two more graded victories, never finishing out of the money in her nine starts. But she upped her game further at four, finishing first in seven of eight starts and adding a trio of Grade I wins, highlighted by one of the most heart-pounding stretch battles of the year in the GI Personal Ensign S. with Elate (Medaglia d'Oro).

“The Personal Ensign is one of my all-time favorite races for us with Midnight Bisou, but as a racing fan, to me it's one of the most special races,” Bloom said. “When they crossed the wire, I thought the nose went to us but it was so hard to tell. Time just stands still. When they flashed our number up there, I can tell you I was floating on air. Really more than anything, I was so happy for Midnight Bisou. It's what horse racing is all about.”

After connections made the decision to race one more season, scratching her from the 2019 Fasig-Tipton November Sale on the morning of the GI Longines Breeders' Cup Distaff, the newly-crowned Eclipse winner crossed the globe to make her 5-year-old debut this year in the $20-million Saudi Cup, where she closed to finish an ultra-game second behind fellow champion Maximum Security (New Year's Day).

“That was one of the most thrilling, rewarding experiences of my lifetime to see her show up and go across the world and run second against the best racehorses,” Bloom said. “It made us feel like, yeah, this is all working out the way it's supposed to.”

After another win in the GII Fleur de Lis S. June 27 and a close second in the Personal Ensign Aug. 1, Midnight Bisou was expected to prime for a final appearance in the Breeders' Cup with a match-up against rival Monomoy Girl (Tapizar) in the Distaff, or perhaps even a start in the GI Classic. But during her final work before shipping to Lexington for the GI Juddmonte Spinster S., an injury forced her connections to choose an early retirement.

“We were devastated,” Bloom said. “We had more to do. She deserved to have that Breeders' Cup trophy sitting on the mantle. It's hard to get your head around that this is how it's finishing. But at the end of the day, we found out she's going to be fine and this in no way is going to affect anything as it relates to her being a broodmare, so we'll take advantage of knowing that we had an incredible ride and she's going to be happy and be able to shine at the Night of Stars and hopefully have a banner second career.”

Midnight Bisou retired with earnings well over $7 million and never finished out of the money in any of her 22 career starts for co-owners Bloom Racing, Madaket Stables LLC and Allen Racing LLC.

The champion has had several pedigree updates since her last time through the auction ring, with her half-brother Stage Left (Congrats) now a black-type-placed winner. Her dam, Diva Delite, sold for $1.2 million at last year's Fasig-Tipton November Sale, carrying a colt by Justify, and this year was bred to Medaglia d'Oro.

When Midnight Bisou sells as Hip 185 with the Elite Sales consignment Nov. 8, Bloom said he won't be unsettled by what could have been the day before at the Breeders' Cup, but instead will find peace in remembering the ride of a lifetime he enjoyed with his family and his $80,000 purchase-turned-over $7-million dollar earner.

“It's impossible to put into words what this ride has meant,” he admitted. “This game is my whole life. She changed my life, my family's life, my partners' lives. There isn't a day that goes by that I don't appreciate and understand how fortunate I am that this came, that this experience was handed to me, and I'll forever be grateful and appreciative.”