Home » Archive » Shared News » An Instilled Regard for Speed and Distance

An Instilled Regard for Speed and Distance 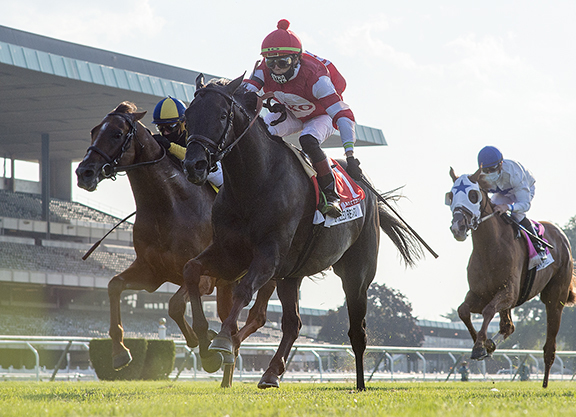 Instilled Regard gets up to win the GI Manhattan S. | Sarah Andrew

Three months after it was announced that Larry Best's OXO Equine would venture into the stallion business with 'TDN Rising Star' Instagrand (Into Mischief) at Taylor Made Stallions, a second addition was made to the farm's 2021 roster in Best's leading earner Instilled Regard (Arch).

The 6-year-old will stand his first year at stud for a fee of $12,500 and Taylor Made's Frank Taylor said that demand has been high since his retirement was announced in December.

“We are very excited about having Instilled Regard added to our roster at Taylor Made,” he said. “You don't see horses like this come along very often. He's been very well-received and we're steadily booking mares to him.”

Bred by KatieRich Farms, Instilled Regard RNA'd for $110,000 at the Keeneland September Sale, but then brought the fourth-highest bid of the 2017 OBS March Sale when he sold to OXO Equine for $1.05 million.

Placed under the care of Jerry Hollendorfer, he broke his maiden by over four lengths in late October of his juvenile season before running second to eventual four-time Grade I winner McKinzie (Street Sense) in the GI Los Alamitos Cash Call Futurity.

Instilled Regard became a top consideration on the Derby trail after taking the GIII Lecomte S. and while he had to settle for fourth in the 2018 GI Kentucky Derby, Taylor said he believed it was one of the colt's best efforts.

“He performed amazingly in the Derby,” Taylor said. “He broke last and had a terrible trip, but he just closed like crazy and ran the fastest quarter of that Derby and was closing in on Justify (Scat Daddy) and some other top horses in Good Magic (Curlin) and Audible (Into Mischief).”

After transferring to Chad Brown's barn, the dark bay switched over to the turf and placed in the GI Hollywood Derby in his final start as a sophomore. He came back at four to win the GII Ft. Lauderdale S.

“It was absolutely amazing how he performed in the Manhattan,” Taylor recalled. “[Jockey] Irad Ortiz had so much confidence in the horse. I was scared; I thought he was going to run last the way it was looking. Then when he turned that horse loose, he exploded and shot through all the horses and finished up strong. It was just a turn of foot that you hardly ever see. It takes a superhorse to be able to do that.”

Instilled Regard retired with just under a million dollars in earnings, running in the money in a dozen of his 18 starts over his four-year career.

“It's very rare to see a horse run at all those ages and stay sound through all of that,” Frank said. “To go through the 2-year-old sales and then stay sound at two, three, four and five and have very little to no setbacks, to run steady that whole time and switch from dirt to turf, it takes a special horse to be able to do that.”

The son of Arch is out of the winning Forestry mare Enhancing, a daughter of Heavenly Prize (Seeking the Gold), an eight-time Grade I winner, champion and Hall of Fame inductee. Heavenly Prize is also responsible for the likes of dual Grade I winner and millionaire Good Reward (Storm Cat), graded stakes-winning dual-hemisphere sire Pure Prize (Strom Cat), as well as Just Reward (Deputy Minister), the dam of GI Personal Ensign S. winner Persistently (Smoke Glacken).

“Instilled Regard is a true Classic-bred horse,” Taylor noted. “That sire line, with Heavenly Prize on the bottom side, gets you distance. The Phipps family gets you distance. But he's also extremely fast. It absolutely amazes me that a horse bred like he's bred works that fast at a 2-year-old sale to bring a million dollars.”

Taylor also said he believes Instilled Regard offers a much-needed continuation of his sire line.

“I love the Hail To Reason line,” he said. “It's very interesting because we actually stood Kris S. (Roberto) with WinStar and he was a superhorse. Even going back to Halo (Hail To Reason), my father raised Halo so we were around him as a kid. That sire line, there's not a lot left of it and it's a strong strain that gets you the distance that we so desperately need in this country.”

Taylor added that he is encouraged by the similarities between Instilled Regard's pedigree and that of hot young sire Nyquist (Uncle Mo).

The first mare slated for Instilled Regard's book was three-time Grade I winner Blue Prize (Arg) (Pure Prize), the 2019 GI Breeders' Cup Distaff heroine and $5 million purchase for OXO Equine. Blue Prize was bred to Into Mischief in 2020 and this year's mating with Instilled Regard will double up on champion Heavenly Prize.

“If that's any indication of how he's going to be supported by our team and by OXO Equine, that's a big plus,” Taylor said. “OXO believes in the horse for the long term and we just think he is a super horse. I mean, he is a specimen. Once people see him, they're going to want to sign a contract.”

Taylor said that balance is the key word when describing Instilled Regard physically.

“Everything about him is just balanced,” he said. “He's got a beautiful head and every time he walks out, he has that presence– that Grade I presence. He's got a beautifully clean neck that ties in perfectly to his shoulder and a deep heart girth. What amazes me is that he looks like a true Classic horse, but then the fact that he had as much speed as he did and could run at two just blows your mind. This horse could do it all.”

With hopes for that same versatility and durability to pass on to the new stallion's offspring, Taylor said he finds Instilled Regard's price point to be of great value.

“At $12,500, he is an absolute steal,” he said. “If you want to breed a 2-year-old that is fast, he can get that. If you want to breed a horse than can run a mile-and-a-quarter in the Derby, he can do that too. This horse has got a big shot in my mind. If you look at all the other horses standing for $15,000 and below, I think he's the best value out there.”