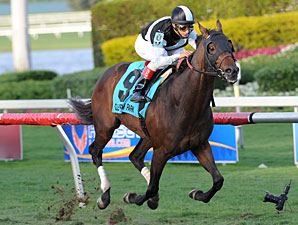 Amira's Prince (Ire) (Teofilo {Ire}–Twice the Ease {GB}, by Green Desert) will stand his first season at stud at Pleasant Acres in Florida. His fee will be $5,000 stands and nurses. The bay carried the colors of Wachtel Stable, Eclipse Thoroughbred Partners, Gary Barber and Brous Stable to wins in the 2013 GII Mervin H. Muniz Jr. H. at Fair Grounds and GII Mac Diarmida S. at Gulfstream Park.

“I am a passionate breeder of turf horses, and, to me, this horse ticks all of the boxes,” said Joe Barbazon, owner of Pleasant Acres. “He is by a champion juvenile from the most prolific sire line in the world, and he is from an outstanding female family. On top of it all, this is a gorgeous animal.”

Amira's Prince, also third in the GI Gulfstream Park Turf H., retired with a record of 15-5-3-2 and earnings of $542,920. Bred in Ireland by Gigginstown House Stud, the 150,000gns TATOCT yearling annexed his maiden win at The Curragh in 2012 before relocating to these shores later that season.

“When Amira's Prince was on top of his game, he was one of the best turf horses in the country over the last couple of seasons,” Hall of Fame trainer Bill Mott said. “He was a bit of a hard-luck horse, and that kept him from winning a Grade I.”