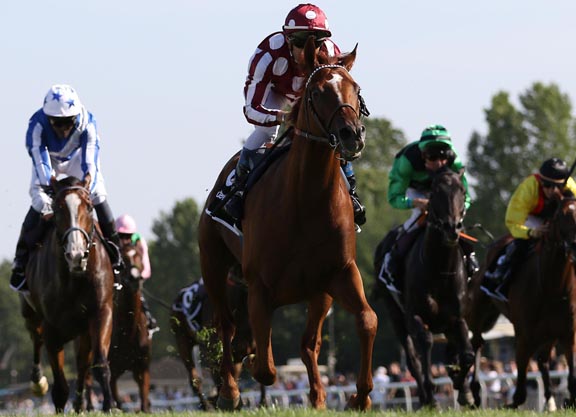 The three-day HH The Amir Festival comes to a conclusion with the marquee race of the meeting, the US$1-million HH The Amir Trophy, a race which has attracted last year's top-three placegetters, a local legend looking for a third win in the event, an intriguing American import and some of the world's top jockeys.

The locally owned French King (GB) (French Fifteen {Fr}) defeated Royal Julius (Ire) (Royal Applause {GB}) and the well-traveled Hunting Horn (Ire) (Camelot {GB}) with relative ease 12 months ago and proved the merits of that performance with three straight scores on the European continent, including the G1 Grosser Preis von Berlin in August. The ground was against him when ninth in the G1 Prix de l'Arc de Triomphe in October, but he won this fresh in 2019 and should take some beating beneath regular partner Olivier Peslier.

Eight-year-old The Blue Eye (GB) (Dubawi {Ire}) makes his fifth consecutive appearance in the main event, having won it in 2016 and again two years later. Beaten just 3 1/2 lengths into fourth last year, he enters this on a two-raced winning streak, having outfinished Noor Al Hawa (Fr) (Makfi {GB}) in a 2200m test Feb. 1.

Pedro Cara (Fr) (Pedro the Great) traveled to the U.S. and was a nose second to the classy Spanish Mission (Noble Mission {GB}) in the Jockey Club Derby at Belmont Park and has one run since, a 1 1/4-length tally over Bangkok (Ire) (Australia {GB}) in the 2000-metre Qatar Derby Dec. 21. Tony Piccone jets in from Hong Kong for the ride.

Standard Deviation (Curlin) was victorious in last year's Jersey Derby at Monmouth Park and third in the GI Hollywood Derby for Klaravich Stables and trainer Chad Brown. He has since been purchased by Sheikh Mohammed bin Khalifa Al Thani and is now conditioned by Graham Motion.