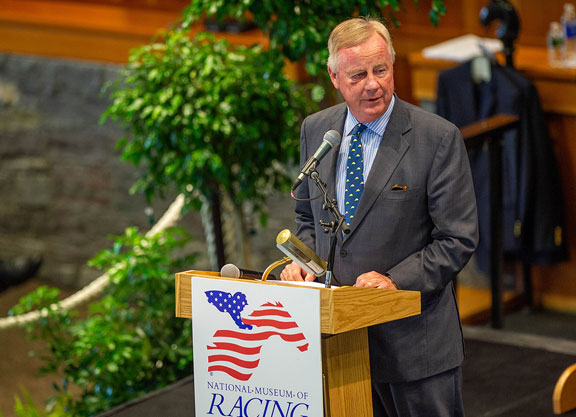 Against the backdrop of just-released news that the 2020 North American foal crop projects to be the lowest since 1966, speakers at The Jockey Club's 67th annual Round Table Conference in Saratoga Springs, New York, Sunday underscored the need for unity within a fragmented industry to help the sport seize opportunities during a time of existential crisis.

Stuart S. Janney III, The Jockey Club's chairman, briefly mentioned during remarks leading into the Round Table's intermission that the 2020 foal crop projection is expected to dip to 20,500.

After the event, The Jockey Club issued a press release confirming that number while also announcing a downward revision to the 2019 foal crop projection, from 21,500 to 20,800. The high mark for the continent's crop was in 1986, when 51,296 Thoroughbreds were foaled.

It's not news that the decades-long trajectory of the foal crop–long considered the key metric for measuring the health of the bloodstock industry–has been diminishing. But Sunday's Round Table drilled home the point that that decline, coupled with a more recent calamity–the 30 equine fatalities at Santa Anita Park that put racing under a media microscope and triggered extremists' calls for banishment of the sport–together present a very real threat that is still not adequately being dealt with.

By using the 2019 Round Table's list of speakers as a guide, it's no secret that The Jockey Club sees the best path to long-term industry viability as going straight through the United States Congress. In addition to one agenda item specifically devoted to “The Case for the Horseracing Integrity Act,” three other hand-picked panelists made it a point Sunday to speak in favor of pending federal legislation to establish an independent anti-doping and medication control program.

As per the custom of the Round Table format, there were no opportunities for audience members or journalists to ask the speakers questions during the event, thus no opposing viewpoints of HR 1754 were raised.

The fact that The Jockey Club now contracts with a crisis management firm to help the industry deal with the aftermath of the Santa Anita emergency (and other equine welfare-related issues that pop up nationwide) speaks volumes about the need for stakeholders to not only come up with meaningful changes, but to be able to articulate them properly to the public.

“Recognize that we can't market or spin our way back to the public perception of eight months ago,” David Fuscus, a crisis communications specialist who is the president and chief executive for Xenophon Strategies, told the Round Table audience. “That is gone forever.”

Fuscus, whose firm is being retained by The Jockey Club, added that “This story is not going away. We can't wait it out. We can't muddy the waters. This is the most critical time that American horse racing has ever experienced. And without better unity and action, this sport will be diminished, and in places it will cease to exist.”

But, Fuscus added, “if we come together as an industry, negative perception can be turned. There is hope we can come through these dark days. But to do so, the public needs to understand what we are doing and believe we are on a path to success.”

Fuscus said that since January, when the Santa Anita horse deaths began to mount, his firm tallied 20,000 news stories “on the industry and our troubles.” (TDN could not independently verify that figure).

Over the past few weeks, Fuscus said, there has been “less event-based coverage now that the Santa Anita meet is done, but we're seeing that coverage is evolving. We're seeing less event-driven news coverage and the appearance of long-lead investigative pieces. These pieces are by high-quality journalists. And I can tell you, none of these stories are going to be flattering to the horse racing industry.

“If we look at the key elements of crisis communications–engagement, transparency, responsibility, meaningful actions–we don't score very well,” Fuscus said. He explained that although many stakeholders are engaged in coming up with solutions, the industry suffers because those efforts are not coordinated.

“With fragmented efforts, the industry's response is cloudy. There's no unified narrative,” Fuscus said. “From the public's perspective, there isn't a clearly communicated fix or even consensus on the chief reasons for the spikes in the equine fatalities. We are a long, long way from meeting the first rule of crisis communications, which is 'End it.'”

Separately, for the past several years, The Jockey Club has sought help from outside of the racing industry by attempting to leverage relations with The Humane Society of the United States (HSUS) to work toward passage of HR 1754.

Valerie Pringle, the campaign manager for equine protection within the HSUS, said that, “We are not one of the animal welfare crazies who is trying to shut you down. We want to work with you.”

William Lear, Jr., a Kentucky-based equine law attorney who is The Jockey Club's vice chair, spoke about The Jockey Club's perspective on HR 1754. His most resonant comment about the need for reform happened during a digression, when Lear tried to get across an anecdote about how he believes the lack of a uniform drug policy is forcing some Thoroughbred breeders to consider leaving the business.

“Within the last three weeks, I've had two separate conversations with longtime, successful breeders who are giving serious, serious thought to having to sell their farms if something doesn't happen quickly and effectively soon,” Lear said.

Widening the anti-doping lens to the international level, John Messara, the founder of Arrowfield Stud in Australia who has also served as chairman of the Australian Racing Board and other regulatory and marketing agencies in his country, predicted that passage of an overarching no-drugs law in U.S. racing “would unleash an economic monster” that could benefit the entire global bloodstock industry.

“I think one of the benefits is going to be that the likes of myself would look at America again as somewhat of a [marketplace] for horses,” Messara said. “As it stands today, it's difficult [for international buyers] to judge whether we should be buying a mare [because of whether or not she was] treated with Lasix [or other drugs]. So rather than get bitten by [not knowing what drugs might have been administered] we stay clear. The same is applied as far as stallions are concerned. America's credibility as an international provider of bloodlines is low compared to what it could be.”

Various versions of the federal bill backed by The Jockey Club have existed since 2015. GovTrack, a government transparency organization that uses logistic regression analysis to rank likelihood of passage, currently gives HR 1754 a 4% chance of being enacted.

The bill's sponsor, Rep. Paul Tonko (D-NY), was in attendance and was introduced to the Round Table audience, but he was not called upon to speak during the conference.

Other Round Table topics that were discussed included updates on racing surfaces research, the pros and cons of alternate forms of stewards' officiating, sports betting integration at racetracks, and new media and television initiatives.

“Most of us will agree that there will be more changes in the next five years than we've seen in the last 50,” Janney said in summary remarks that closed the conference.