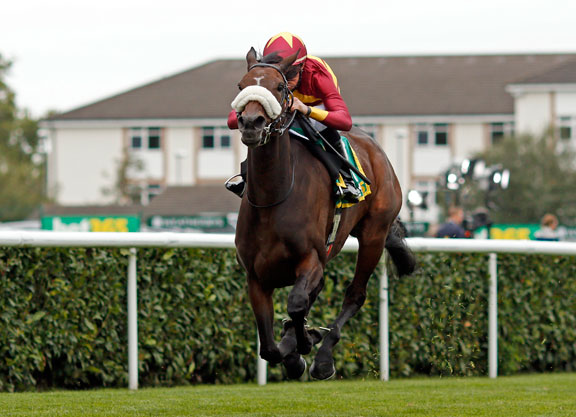 Proving her stamina for 14 furlongs when winning Leopardstown’s Listed Vinnie Roe S. Aug. 13, Scott Heider’s Pista (American Pharoah) overcame inexperience to follow up in a competitive renewal of Doncaster’s G2 bet365 Park Hill Fillies’ S. on Thursday. Anchored in last early by William Buick, the 6-1 shot was delivered towards the stand’s side to gain the lead in the final 100 yards and despite running away from the whip scored by 1 1/2 lengths from Vivionn (GB) (Dubawi {Ire}), with the 11-8 favourite Believe In Love (Ire) (Make Believe {GB}) half a length away in third. “She had a lovely profile coming in and I thought she did it well–she’s a good, staying filly,” the winning rider said. “I thought the race was there for an improver to come through and she was that one horse. She was in a nice rhythm and is an uncomplicated filly.”

Pista was off the mark by 6 1/2 lengths over a mile and a half in soft ground at the Galway festival Aug. 2 before upstaging Saturday’s G1 St Leger protagonists Sunchart (GB) (Teofilo {Ire}) and Dawn Patrol (Ire) (Galileo {Ire}) in the Vinnie Roe. Trainer Joseph O’Brien could have a week to remember if Galileo Chrome (Ire) (Australia {GB}) can deliver in Saturday’s main event. “I thought William gave her a great ride,” he said. “I was a little worried, because she was a little bit further back than we’d planned for most of the way and she ran around a bit in the straight, but she’s got a big engine. She’s a tall filly, so hopefully she’ll progress next season. There’s a nice fillies’ race on Arc weekend [the G1 Prix de Royallieu] that might suit her now if she comes out of this well.”

Pista is the first foal out of the Niarchos-bred Mohini (Ire) (Galileo {Ire}), who is a daughter of the operation’s G1 Prix Marcel Boussac heroine Denebola (Storm Cat). Also runner-up in the G1 Prix de la Foret, she is the second dam of the G1 Prix de Diane winner Senga (Blame) and is a granddaughter of the famed G1 Prix Morny and G1 Prix de la Salamandre heroine Coup De Genie (Mr. Prospector). That links the winner to the high-class half-siblings Bago (Fr) (Nashwan) and Maxios (GB) (Monsun {Ger}), with seven group 1 wins between them and the former the 2004 European champion 3-year-old colt courtesy of his exploits in the G1 Prix de l’Arc de Triomphe, G1 Prix Jean Prat and G1 Grand Prix de Paris. Mohini’s 2-year-old full-sister to the winner is named Ishtar (Jpn), while she also has a yearling filly by Kitasan Black (Jpn).