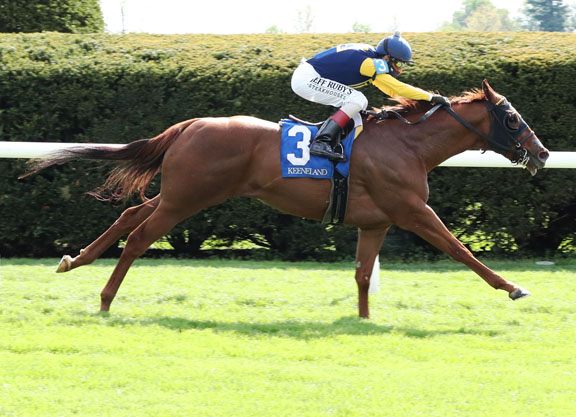 7th-Keeneland, $78,525, Alw, 4-15, (C), 4yo/up, 5 1/2fT, 1:02.60, gd, 2 1/4 lengths.
MAVEN (g, 4, American Pharoah–Richies Party Girl {MSW, $357,085}, by Any Given Saturday) became the first North American winner for his sire on debut over the Aqueduct main track just shy of two years ago and was the last of 22 lots to go through the ring for the boutique Goffs London Sale, but was retained by owner Richard Ravin on a bid of £725,000 (about $912,000) that would otherwise have topped the event. The chestnut rewarded that confidence with a victory in the G3 Prix du Bois at Chantilly, but he was only 10th in the G3 Molecomb S. the next month and was returned stateside. The front-running winner of a course-and-distance allowance first off a 342-day absence last July, Maven was a disappointing sixth in Saratoga's Mahony S. Aug. 27 and was 11th of 12 in the GIII Franklin Stamps S. at Kentucky Downs Sept. 16 before going missing. Returning here as a first-time gelding, Maven shot out of the stalls beneath John Velazquez while chased by 'TDN Rising Star' Boldor (Munnings). Maven looked vulnerable passing the eighth pole, but he finally switched his leads and he kept on well thereafter to secure a 2 1/4-length success as the 5-2 favorite. Maven is the only foal from a treble stakes-winning daughter of GSW Very Special Lite (Majestic Light), also the dam of GSW Strategic Partner (Kris S.), GSP Victory Light (Victory Gallop) and the dam of SW/GISP Light the City (Street Sense). Sales history: £725,000 RNA 2yo '19 GOFLON. Lifetime Record: GSW-Fr, 7-4-0-0, $200,338. Click for the Equibase.com chart or VIDEO, sponsored by TVG.
O-Richard Ravin; B/T-Wesley Ward (KY).