American Pharoah’s Maven too Fast for Them at Keeneland 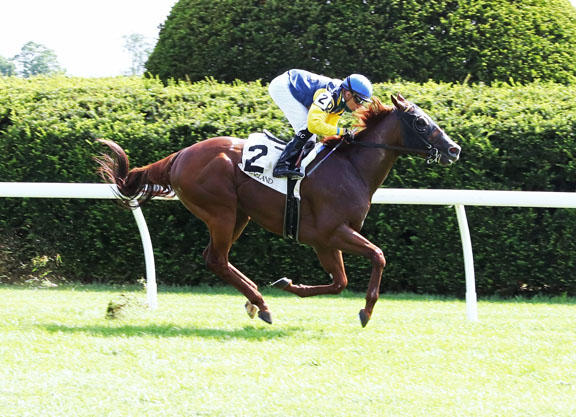 8th-Keeneland, $79,935, Alw, 7-8, 3yo, 5 1/2fT, 1:03.02, gd.
MAVEN (c, 3, American Pharoah–Richies Party Girl {MSW, $357,085}, by Any Given Saturday), the less fancied of a pair of Wesley Ward runners at 3-1, turned this event into a one-horse affair for a barn that wins more than its fair share of sprints on the Lexington lawn. A debut winner while earning a strong 84 Beyer Speed Figure in April of his 2-year-old season, the chestnut traveled overseas to annex Chantilly’s G3 Prix du Bois that June. He had been off since finishing 10th in Goodwood’s G3 Molecomb S. July 31, but showed some upbeat drills over the local turf for this. Hard ridden to seize command early, Maven doled out an opening quarter of :21.62 as his stakes-winning female stablemate Cambria (Speightstown) was forced to take up sharply around the turn. Maven continued into the lane unopposed and, despite never switching leads, streaked home 2 3/4 lengths to the good of of big longshot Johnny Unleashed (Colonel John). Cambria never recovered from the trouble and checked in 10th. The winner is the lone registered foal out of Richies Party Girl, who took the 2013 Juvenile Turf Sprint on Breeders’ Cup weekend and added two more turf sprint stakes the following season. Sales history: £725,000 RNA 2yo ’19 GOFLON. Lifetime Record: GSW-Fr, 4-3-0-0, $143,488.  Click for the Equibase.com chart or VIDEO, sponsored by Fasig-Tipton.
O-Richard Ravin; B/T-Wesley Ward (KY).