American Pharoah, Pletcher, Fisher To Be Enshrined in HOF 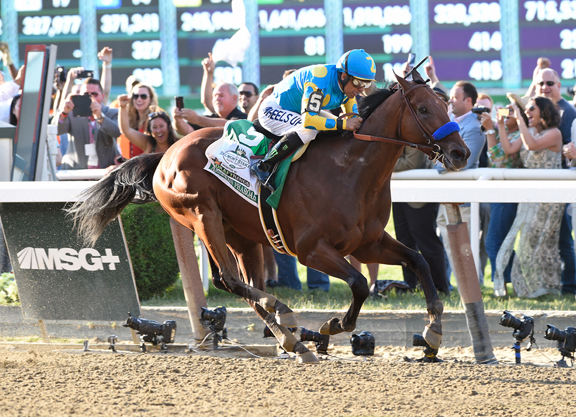 American Pharoah (Pioneerof the Nile), who became racing's first Triple Crown winner in 37 years in 2015, and trainers Todd Pletcher and Jack Fisher are the 2021 inductees into the National Museum of Racing Hall of Fame. American Pharoah and Pletcher were elected in the contemporary category and each in their first year of eligibility. Fisher was chosen by the Museum's Steeplechase Review Committee, which convenes once every four years.

Bred and raced by Zayat Stables, American Pharoah was a $300,000 buyback at the 2013 Fasig-Tipton Saratoga sale and broke his maiden at second asking in the GI Del Mar Futurity before adding the GI FrontRunner S. Named the Eclipse Award-winning 2-year-old male despite having to miss the GI Breeders' Cup Juvenile, the son of Littleprincessemma (Yankee Gentleman) launched his assault on the Triple Crown with towering victories in the GII Rebel S. and GI Arkansas Derby before taking the GI Kentucky Derby by a length.

The seven-length winner of the GI Preakness S., he led throughout to win the GI Belmont S., becoming the first Triple Crown winner since Affirmed in 1978. He added the GI Haskell Invitational S. and rebounded from a runner-up effort in the GI Travers S. to demolish his rivals by 6 1/2 lengths in the GI Breeders' Cup Classic, closing his career with a record of 11-9-1-0 and earnings of $8,650,300. American Pharoah is now a leading sire at Ashford Stud.

“He's certainly among the all-time greats. I don't think there is any question about that,” Baffert said. “He did everything so effortlessly and with such class. The way he moved, his mechanics were absolutely flawless. He also has such a wonderful personality. Pharoah is really a sweet and kind horse and he loves humans. I went and saw him the other day [at Ashford] and he looks as good as he's ever looked, if not better. Winning the Triple Crown with American Pharoah was the greatest sports moment of my life. It was so emotional and such a terrific thing for racing. He deserves all the accolades he gets.”

A native of Dallas, Texas, 53-year-old Todd Pletcher went out on his own in 1996 following a six-year stint as assistant to trainer D. Wayne Lukas. He won his first race 25 years ago and owns records for career earnings ($405.7 million) and Eclipse Awards (seven) and is the seventh winningest trainer of all time with 5,118 trips to the winner's circle. He has saddled two winners of the Kentucky Derby (Super Saver, 2010; Always Dreaming, 2017) and has won the Belmont S. on three occasions (Rags to Riches, 2007; Palace Malice, 2013; Tapwrit, 2017). Just last Friday, Malathaat (Curlin) became Pletcher's fourth GI Kentucky Oaks winner, joining Ashado (2004), Rags to Riches and Princess of Sylmar (2013).

Pletcher is responsible for 11 champions and has been leading trainer at 60 individual race meetings, including 17 at Gulfstream Park, 16 at Belmont and 14 at Saratoga. According to data from Equibase, Pletcher has saddled the winners of 708 graded events, including 166 Grade I races.

“I'm really humbled to be elected to the Hall of Fame. It's an incredible honor and something that doesn't happen without having great support around you,” Pletcher said. “I've been extremely fortunate to have a great team to work with and my family has been there every step of the way. There have been so many great owners who have trusted me with their horses and those horses have meant everything to me. Along with my family and team, I had amazing opportunities to learn from the likes of Wayne and Jeff Lukas and working winters alongside Kiaran McLaughlin, who taught me a lot about horses and also how to work with owners and communication skills. It really was a stroke of good fortune to come up with people like that around me.

“Training horses is all I ever wanted to do,” he added. “I remember being 11 or 12 and telling my mom I wanted to train and she said it was wonderful. From that point on with her endorsement I never thought of doing anything else.”

Fisher Also Gets the Nod…

Jack Fisher, 57, a native of Unionville, Pennsylvania, won his first race as a licensed trainer in 1988 at Middleburg and has been a perennial leader at the top of the National Steeplechase Association standings for two decades. He won his first trainers' premiership in 2003 and has since led the pack 12 other times. In 2004, he was the leading trainer by earnings for the first of nine times. Through May 4, Fisher has sent out the winners of 593 steeplechase races and ranks second in all-time earnings with more than $17.8 million (behind only Hall of Famer Jonathan Sheppard).

Fisher is the only trainer in steeplechase history to exceed $1 million in earnings in a single season, a feat he has accomplished five times. Among the horses he conditioned were Eclipse Award winner and Hall of Famer Good Night Shirt, a 10-time NSA graded winner, and additional Eclipse winners Scorpiancer and Moscato.

“I've always loved being around horses. It's been my life,” Fisher said. “I was terrible in school and didn't want to be there. I loved riding and I love training. I learned a lot from my father (trainer John Fisher) and from guys like (Hall of Fame trainers) Mikey Smithwick and Tommy Voss. They were examples to me of the work it takes to be successful and also how they built a good team. You can't do it alone.

The class of 2021 will be enshrined along with the 2020 inductees–trainer Mark Casse, jockey Darrel McHargue, horses Tom Bowling and Wise Dan, and Pillars of the Turf Alice Headley Chandler, J. Keene Daingerfield, Jr., and George D. Widener, Jr.–Friday, Aug. 6, at the Fasig-Tipton sales pavilion in Saratoga Springs at 10:30 a.m. The ceremony will be broadcast live on the Museum website at www.racingmuseum.org. An announcement regarding public attendance at the ceremony will be made at a later date.