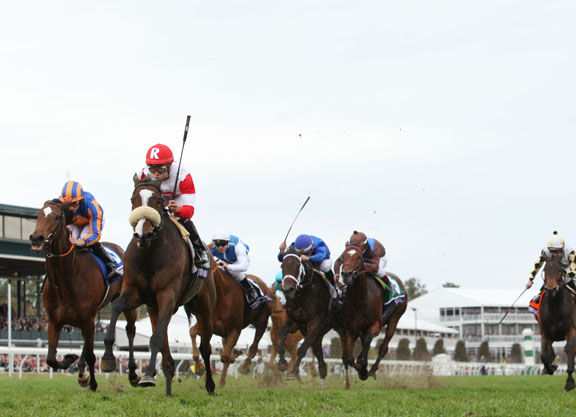 A pair of immaculately bred 2-year-old fillies by the late Deep Impact (Jpn) and produced by two mares of considerable importance in the U.S. broke their maidens about 30 minutes apart at Japan's Niigata Racecourse Sunday, Aug. 11.

Sunday Racing Co. Ltd's Catulus Felis (Jpn), the first foal out of 2015 GI Breeders' Cup Filly & Mare Turf winner Stephanie's Kitten (Kitten's Joy), validated 3-10 favoritism to graduate over 1800 meters. Drawn gate 12 in the field of 14, the February foal was off a beat slowly then settled about three deep on the track and slightly better than midfield down the backstretch in the one-turn event. Improving with cover to be just behind the leading group nearing the entrance to the long straight, Catulus Felis was guided off heels and asked for her best 250m from home and kicked on best of all to win by 3/4 of a length (see below).

A five-time Grade I winner for Ken and Sarah Ramsey, Stephanie's Kitten was first offered at the 2014 Fasig-Tipton November Sale, but was bought back on a bid of $3.95 million and trained on at age six. She again failed to meet her reserve at FTKNOV and was led out unsold at $2.95 million shortly after her Breeders' Cup success at Keeneland, but the Ramseys struck a private deal to sell Stephanie's Kitten to the Yoshida family's Northern Farm. Stephanie's Kitten produced full-siblings to Catulus Felis in 2018 and 2019.

Sanctuaire (Jpn), a half-sister to 'TDN Rising Star' and dual-surface Grade I winner Yoshida (Jpn) (Heart's Cry {Jpn}), was made the 1-2 chalk for her 1600-meter unveiling and belied her inexperience to open her account by 1 1/4 lengths. Racing in the Carrot Farm colors, the bay put herself right into the race and took up a stalking position from second. Held together into the final quarter-mile, she took some time to find top gear and wanted to lay out inside the final furlong, but reeled in the long-time leader in the final 50 yards (see below, gate 6).

Sanctuaire's dam, former Starlight runner Hilda's Passion (Canadian Frontier), demolished her rivals by 9 1/4 lengths in the 2011 GI Ballerina S. at Saratoga and was knocked down to Northern Farm for $1.225 million at FTKNOV later that fall. In addition to Yoshida–a ¥94-million graduate of the 2014 JRHA Select Foal Sale–Sanctuaire is kin to four other winners from as many to race as well as a yearling filly by 2015 G1 Tokyo Yushun (Japanese Derby) winner Duramente (Jpn) (King Kamehemeha {Jpn}) and a full-brother foaled this past Feb. 27.

WATCH: Sanctuaire becomes the latest winner for her dam