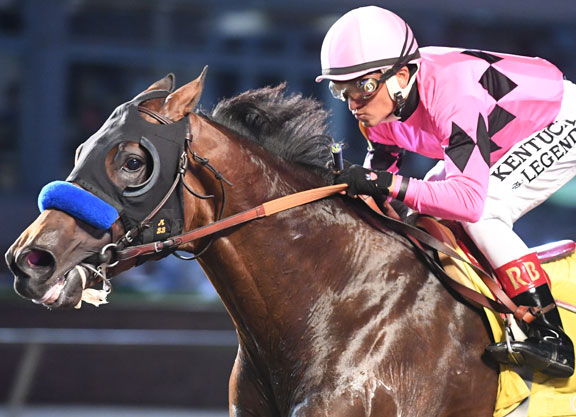 American Freedom (Pulpit–Gottcha Last, by Pleasant Tap), winner of the 2016 GIII Iowa Derby and runner-up to Arrogate (Unbridled's Song) in the GI Travers S., has been retired from the races and will enter stud for the 2018 breeding season at Brereton C. and Elizabeth Jones's Airdrie Stud. He will command a first-season fee of $10,000, stands-and-nurses terms.

Bred in Kentucky by the late Vernon Heath's Centaur Farms, American Freedom was purchased by owners Gary and Mary West for $500,000 out of the 2014 Keeneland September Yearling Sale and won three of his first four trips to the post, posting a 98 Beyer Speed Figure in his seven-furlong debut last April ahead of a score in the Sir Barton S. in just his third career start. A comprehensive 4 3/4-length winner of the GIII Iowa Derby in his first graded-stakes foray, American Freedom was a clear second to GI Preakness S. hero Exaggerator (Curlin) after leading into the final furlong of last year's GI Betfair.com Haskell Invitational S. and rounded out a Bob Baffert-trained exacta behind the future 3-year-old champion in the Midsummer Derby. In those two races, he finished ahead of Gun Runner (Candy Ride {Arg}), GI Kentucky Derby winner Nyquist (Uncle Mo), GI Belmont S. hero Creator (Tapit) and future Grade I conqueror Connect (Curlin).

“American Freedom is as good looking as any stallion we've put in our stallion barn. He's absolutely, drop-dead beautiful” said Airdrie's Brereton Jones. “On top of that, he showed he belonged in any conversation of last season's best 3-year-olds by defeating the winners of the Derby, Preakness and Belmont and beating the great Gun Runner both times they met. Both Airdrie and the West family have committed to breed no less than 20 mares apiece to him in each of his first three years at stud because this horse deserves every opportunity to be special. We're betting big on American Freedom and we really believe we're on a winner.”