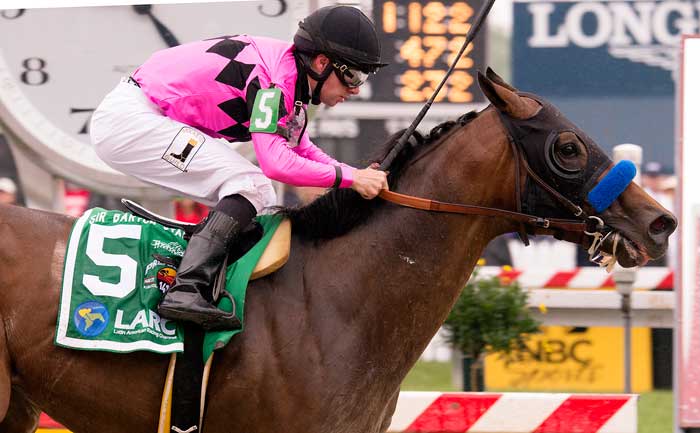 Backing up on two weeks' rest off a disappointing sixth in the GIII Pat Day Mile S. on the GI Kentucky Derby undercard, American Freedom (Pulpit) attended the pace, was headed underneath him by longshot Voluntario (Hold Me Back) at the furlong grounds, but battled back gamely to take Saturday's LARC Sir Barton S. Saturday afternoon.

Content to lay second early as Martin Pedroza was intent on making the lead with Fearless Dragon (Speightstown) from a double-digit draw, American Dragon inherited the advantage when the Southern Equine colorbearer began to give ground on the backstretch. Pressed on the run around the far turn by Donegal Moon (Malibu Moon) to his outside, American Freedom raced tightly between rivals in upper stretch, as Voluntario looked poised to capitalize on a ground-saving trip with a rails run to challenge. But just when it looked like that one would slip through, American Freedom counterpunched and edged away late. Dazzling Gem, inside early, was guided into the clear on the backside, covered extra ground on the second turn and overcame a green stretch run to snag third on the wire.

“Last time I think he just got away bad and they went really fast that day,” winning trainer Bob Baffert commented. “I just told [jockey] Florent [Geroux] to be aggressive and get him into it. I felt a lot of pressure because Gary and Mary West are really great clients and they let me run this horse back in two weeks. He's a really good horse and I wanted to get him another race. I was so disappointed that he got beat last time. We've always been really high on this horse. Today it looked like he was almost done and he came back. Hopefully, he'll have a great summer.”

As a $500,000 graduate of the 2014 Keeneland September sale, American Freedom is the second most-expensive of 12 yearlings from the final crop of his late sire, who passed away in his paddock at Claiborne Farm in late 2012. He has a 2-year-old half-brother by Union Rags and half-brother by Congrats, who was foaled this past Mar. 6.