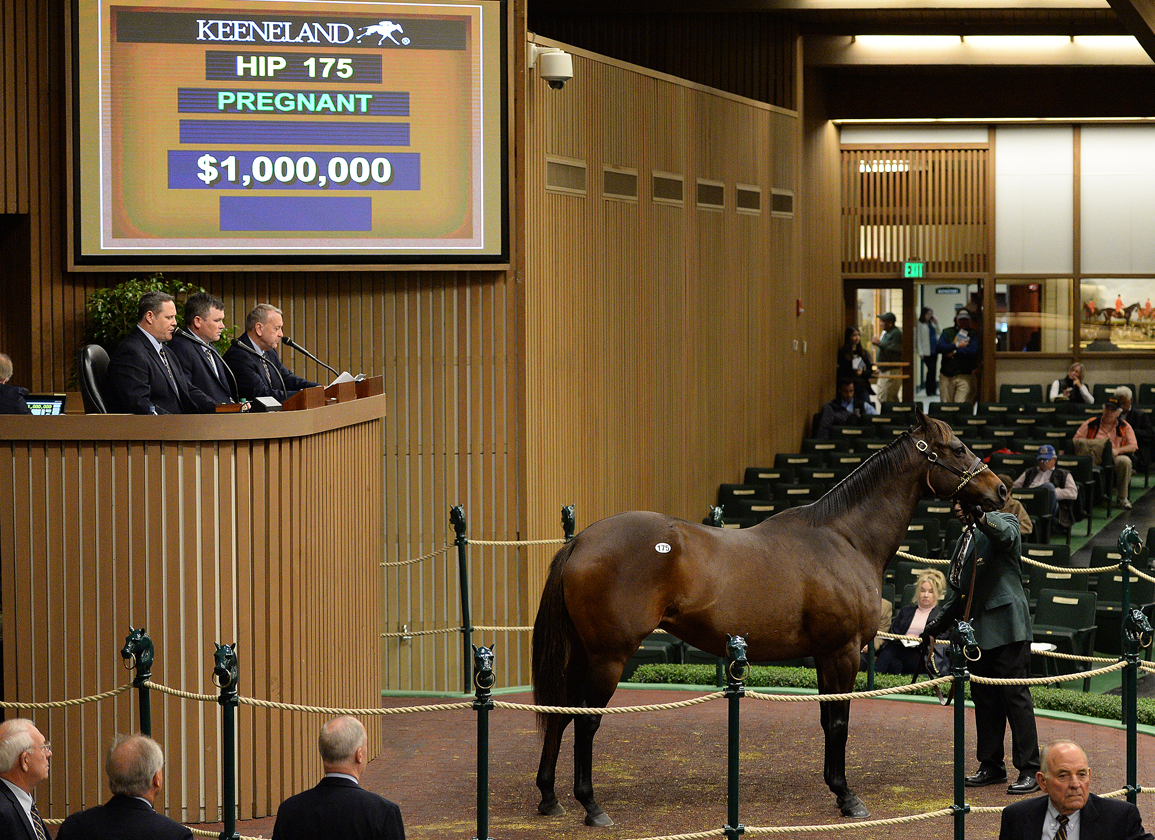 Dust and Diamonds, the dam of champion Do Deuce, selling at Keeneland November in 2016 | Keeneland photo

As has been well-documented, Japanese interests have–over the course of many years–accumulated some of the best bloodstock from all corners of the globe, and as evidenced in Riyadh and Dubai in the last couple of months, the Japanese are breeding horses that can compete anywhere at any level.

Classics season in the island nation kicked off last weekend with the running of the G1 Oka Sho (Japanese 1000 Guineas), with the colts' equivalent–the G1 Satsuki Sho (Japanese 2000 Guineas)–set for this weekend at Nakayama Racecourse. The 3-year-old offspring of some mares whose names will ring familiar dot the field of 18, with each of the four colts something of a winning chance.

Do Deuce (Jpn) (Heart's Cry {Jpn}) is a son of MGSW Dust and Diamonds (Vindication), who was purchased by Katsumi Yoshida for an even $1 million in foal to the late Pioneerof the Nile at Keeneland November in 2016, having been sold to Borges Torrealba Holdings for $900,000 at the same venue just days after her runner-up effort to Groupie Doll (Bowman's Band) in the 2012 GI Breeders' Cup Filly & Mare Sprint. A half-brother to MGSP Much Better (Pioneerof the Nile), Do Deuce capped an undefeated championship season in last years' G1 Asahi Hai Futurity and was the near-miss runner-up in the G2 Deep Impact Kinen on seasonal debut Mar. 6.

Danon Beluga (Jpn) (Heart's Cry {Jpn}) is the first foal from his dam Coasted (Tizway), winner of the P.G. Johnson S. and second in the GI Breeders' Cup Juvenile Fillies Turf in 2016, who was knocked down to Yoshida for $1.3 million at the Fasig-Tipton November Sale in 2017. Just five months after his foaling date of Feb. 7, 2019, Danon Beluga was sent through the ring at the JRHA Select Foal Sale, hammering for $1.472 million, and is perfect in two tries, including a win at Group 2 level Feb. 13. Yuga Kawada, who was aboard the victorious Loves Only You (Jpn) (Deep Impact {Jpn}) in last year's GI Filly & Mare Turf, has the ride from gate one.

Yoshida was striking while the iron was hot at FTKNOV when acquiring then 8-year-old Palace Rumor (Royal Anthem) for $1.1 million in foal to Mineshaft a handful of months after the mare's produce of 2010, a Curlin colt named Palace Malice, took out the GI Belmont S. A half-brother to the MGSP stayer Iron Barows (Jpn) (Orfevre {Jpn}), Justin Palace (Jpn) (Deep Impact {Jpn}) also starred at the JRHA Sales, fetching nearly $1.8 million as a yearling in 2020. The dark bay colt won each of his first two starts over 10 furlongs and was last seen finishing runner-up in the G1 Hopeful S. over Sunday's course and distance when last seen Dec. 28.

The winner of the latter event was Killer Ability (Jpn) (Deep Impact {Jpn}), a son of 2011 GI Hollywood Starlet S. heroine Killer Graces (Congaree), who realized $850,000 from Yoshida at FTKNOV back in 2012. The late January foal was capping a four-race preparation in the Hopeful, having won his maiden by seven lengths at second asking at the end of August before just missing in listed company in October. Killer Ability is the mount of the up-and-coming Takeshi Yokoyama, the regular rider of last year's Satsuki Sho winner, champion 3-year-old and Horse of the Year Efforia (Jpn) (Epiphaneia {Jpn}).