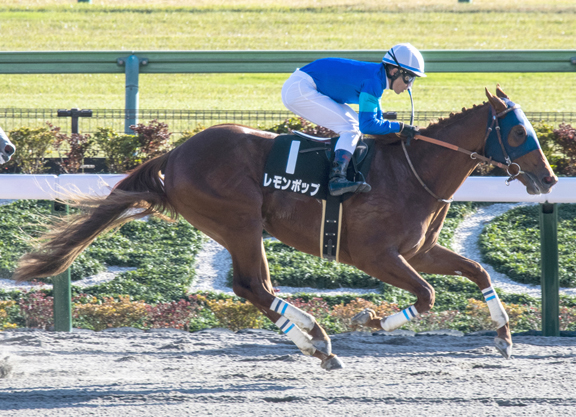 The first of four races on the Japan Road to the Kentucky Derby, the 1600-meter Cattleya S. (allowance), took place Saturday on the eve of the G1 Japan Cup at Toyko Racecourse, with US-bred Lemon Pop (Lemon Drop Kid) running his record to two wins from as many starts with a convincing victory.

The 7-5 second choice, a debut winner in a 1300-meter newcomers' event at Tokyo Nov. 7, broke without incident and was ridden positively from gate one by Keita Tosaki to sit in the wake of pacesetting Takeru Pegasus (Jpn) (Dunkirk), favored at 4-5 off a nine-length maiden victory over Saturday's track and distance Nov. 7. Sitting the pocket into the long Tokyo straight, Lemon Pop rolled away from the fence to come after the front-runner and wore that one down to take it by a cozy 1 1/2 lengths (see below). It was a gap of 10 lengths back to Plus Ultra (Jpn) (Discreet Cat) in third.

Lemon Pop races for Godolphin and was purchased on behalf of Sheikh Mohammed's operation by Harry Sweeney's Paca Paca Farm for $70,000 at the 2018 Keeneland November sale out of Padraig Campion's Blandford Stud consignment. The chestnut was bred by Olly Tait, who served as chief operating officer of Darley for 15 years prior to his departure in 2014, and his wife Amber.

The Cattleya Sho offered Derby points on a 10-4-2-1 scale. The second leg of the series is the Zen-Nippon Nisai Yushun (1600m) at Kawasaki Dec. 16, followed by the Listed Hyacinth S. back at Tokyo in February and the Fukuryu S. (allowance) at Nakayama.