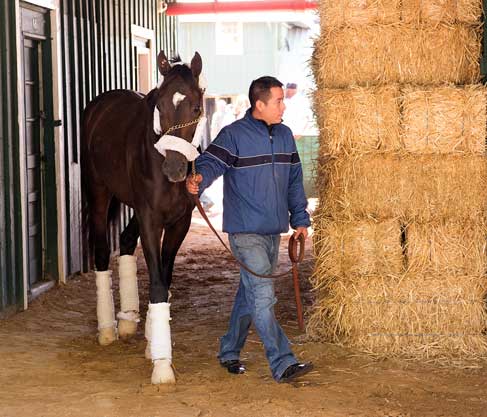 Ginny DePasquale, longtime assistant to trainer Todd Pletcher, was on hand to supervise the arrival, which can be viewed here.

“I just spoke to Todd and told him the horse looks very bright-eyed and very happy. He looks like his normal self that we see every day,” DePasquale told the Pimlico notes team. “It's pretty special to see him looking that well. I'm happy and I know Todd is.”

The van carrying the Pletcher trainees entered the Pimlico stable gate at 11 a.m. and Always Dreaming followed Moana off the van at 11:08 before walking the shedrow of the Preakness Stakes Barn for six minutes and entering Stall 40, the stall traditionally reserved for the Kentucky Derby champion. Cont.

“This year, it's very, very exciting, because we think he's a really special horse,” DePasquale said.

Always Dreaming, who prepped for his Derby win by powerfully annexing the GI Xpressbet Florida Derby Apr. 1 at Gulfstream Park April 1, has won all four of his starts this year by a combined 23 1/4 lengths. The colt is scheduled to get acquainted with the Pimlico racing surface Wednesday morning.

“He's just going to jog with the pony one time around tomorrow at 6:30,” said DePasquale, who will supervise the training session prior to Pletcher's scheduled arrival in Baltimore Wednesday afternoon.

In other Preakness news, contender Royal Mo (Uncle Mo), who finished third in the GI Santa Anita Derby and was left out of the starting gate at Churchill due to insufficient qualifying points, accompanied the Pletcher trainees on the flight from Louisville. The John Shirreffs-trained colt is scheduled to go to the track between 9-9:30 a.m. Wednesday.

Derby seventh-place finisher Gunnevera (Dialed In), who was added to the Preakness probable list Monday, returned to the track at Churchill to jog twice around alongside a pony Tuesday.

“The main factor in deciding to run is that he is sound and doing good and we think we have a good chance in the Preakness,” said Allessandro Sano, son of trainer Antonio Sano, who returned Monday to Miami. “He doesn't seem like he ran a mile and a quarter. We are going to take it one race at a time and right now, the Preakness is the main goal.”

The winner of the GII Xpressbet Fountain of Youth S., who will have Mike Smith aboard in the Preakness, is slated to van to Baltimore early Saturday morning.

Derby runner-up Lookin At Lee (Lookin At Lucky) and 11th-place finisher Hence (Street Boss) both walked the shedrow and will resume training Wednesday at Churchill. Scott Blasi, assistant to Hall of Fame trainer Steve Asmussen, said the horses would fly to Baltimore Tuesday, May 16, on a Tex Sutton flight.

Classic Empire (Pioneerof the Nile), fourth in the Derby after a troubled trip, also walked the shedrow. Norman Casse, assistant to and son of trainer Mark Casse, termed the colt's eye that had swollen shut after the Derby “perfect.”

Ken McPeek, who trains GIII Lexington S. winner Senior Investment (Discreetly Mine), said his charge will also fly out of Louisville next Tuesday. The colt walked Tuesday after breezing a bullet five furlongs in 1:00 2/5 (1/23) Monday at Keeneland.

Multiplier (The Factor), winner of the GIII Illinois Derby Apr. 23 at Hawthorne, jogged Tuesday at Keeneland for trainer Brendan Walsh and is another runner scheduled to fly to Baltimore May 16.