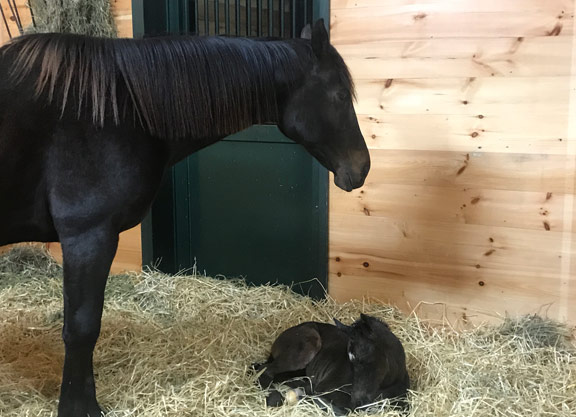 Alpine Sky (Indian Charlie–Alpine Garden, by Lemon Drop Kid), a 7-year-old mare owned by Old Tavern Farm, delivered a colt by More Than Ready at 10:56 p.m. Apr. 15 as part of the National Museum of Racing and Hall of Fame's Foal Patrol Season 3. This is the fifth foal of the season delivered on Foal Patrol. Both the mare and foal are healthy and doing well.

Alpine Sky joins Magical World (Three Chimneys Farm), Hall of Famer Ashado (Gainsborough Farm), New Money Honey (Indian Creek Farm), and Vaulcluse (Gainesway Farm) in having delivered so far this season on Foal Patrol. One more mare – Emotional Kitten at Denali Stud, who is expected to foal Apr. 25, is scheduled to give birth as part of Foal Patrol this season.