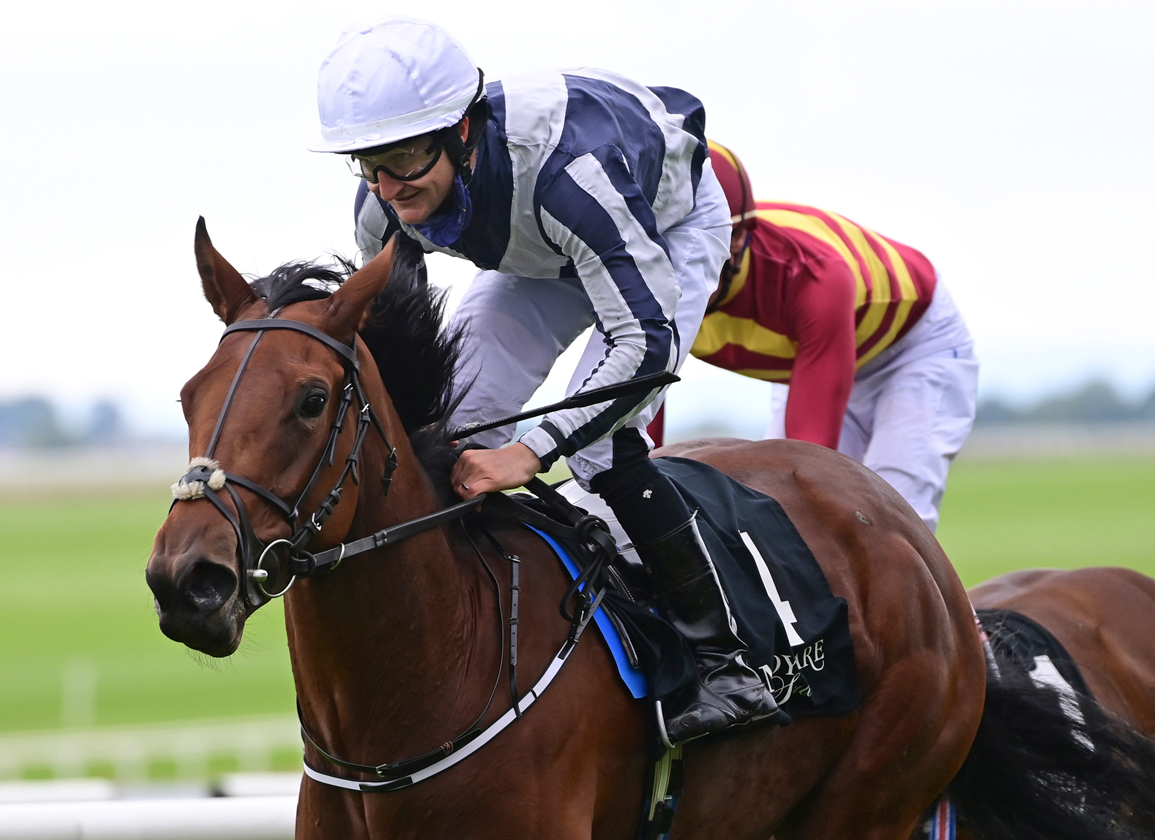 The Curragh's G2 Debutante S. is always a key pointer to the course-and-distance G1 Moyglare Stud S. and Sunday proved no exception as the one-two-three again filled those places headed by the Niarchos Family's Discoveries (Ire) (Mastercraftsman {Ire}). Only third to Agartha (Ire) (Caravaggio) in that seven-furlong precedent Aug. 21, the Jessica Harrington trainee has abundant room for improvement within as a full-sister to Alpha Centauri (Ire) and half to Alpine Star (Ire) (Sea the Moon {Ger}) and was able to turn that around on this slicker surface. Sent up to track Agartha closely from the outset, Shane Foley never allowed that leader more than 1 1/2 lengths margin and when the pressure was applied the 17-2 shot overhauled her passing the furlong pole en route to a 3/4-of-a-length success. There was a further two lengths back to the Debutante runner-up Sunset Shiraz (Ire) (Time Test {GB}) in third, with the well-supported 85-40 favourite Cairde Go Deo (Fr) (Camelot {GB}) dropping out to finish sixth. Harrington, whose No Speak Alexander (Ire) (Shalaa {Ire}) kicked off a Saturday Leopardstown treble for the stable in the G1 Matron S., was not surprised by the turnaround. “The ground was soft for the Debutante and we knew that like her sister she will only go on quick,” she explained. “This is lovely fast ground with lots of grass and that made the difference, plus maybe the three weeks in between which allowed her to strengthen up and come forward. We thought she'd improve with better ground and she'd done a good bit of work earlier in the week.”

Discoveries followed a debut fourth in a Leopardstown maiden over this trip June 3 with a short-head defeat of Tuesday (Ire) (Galileo {Ire}), Ballydoyle's full-sister to the Classic heroines Minding (Ire) and Empress Josephine (Ire), at this venue June 25. Showing steady progression with each outing, she was in front of the country's leading fillies to have raced so far here and for now has the bragging rights having taken this “win-and-you're-in” qualifier for the Breeders' Cup. Her trainer admits she has no firm schedule for the remainder of 2021. “I don't know where we go, as today was the plan,” she said.

“She's a lovely, lovely filly and is completely different to Alpha Centauri, who was a big grey filly. This filly was not as big, but she has done a lot of growing,” Harrington added. “She has a lovely temperament and is not as feisty as Alpha. Alpine Star looked completely different again. She was long and low, not very big. This is what we work towards and to have two group 1 winners this weekend is amazing. She will definitely step up to a mile in time. We never got the chance to step Alpha Centauri beyond a mile, but we might have done had she not been injured.”

Discoveries is already ahead of Alpha Centauri at this juncture of their careers, with that G1 Irish 1000 Guineas, G1 Coronation S., G1 Falmouth S. and G1 Prix Jacques le Marois heroine finishing only fifth in this four years ago. While Alpine Star took the Debutante as a 2-year-old, she missed this race with her next race after that being the G1 Coronation S. which she duly won before finishing second in the Jacques le Marois, the G1 Prix de Diane and G1 Prix de l'Opera. The dam Alpha Lupi (Ire) (Rahy), whose son Tenth Star (Ire) (Dansili {GB}) was the Listed Golden Fleece S. scorer who was also placed in the G2 Royal Lodge S. and G3 Tyros S., is a daughter of another Jacques le Marois heroine in East of the Moon (Private Account). She also completed the G1 Poule d'Essai des Pouliches-G1 Prix de Diane double and is a daughter of the Niarchos luminary Miesque (Nureyev). This is the esteemed family of Kingmambo, another Moyglare Stud S. heroine in Rumplestiltskin (Ire) (Danehill), Tapestry (Ire) (Galileo {Ire}), Study of Man (Ire) (Deep Impact {Jpn}) and Karakontie (Jpn) (Bernstein). Alpha Lupi's yearling is a full-brother to Discoveries and Alpha Centauri, while she also has a colt foal by Magna Grecia (Ire).