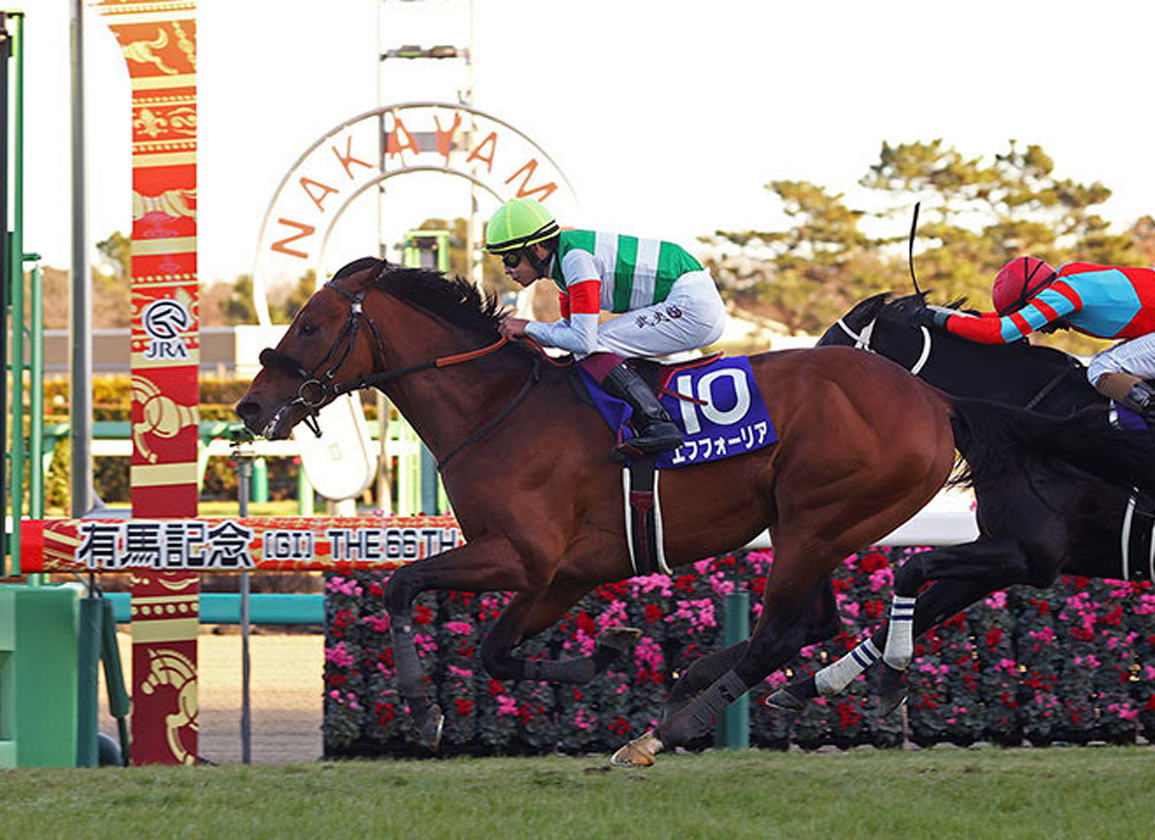 Hanshin Racecourse is the site of Sunday's fan-voted G1 Takarazuka Kinen over the metric 11-furlong trip, with the winner earning a fees-paid berth in the GI Longines Breeders' Cup Turf at Keeneland Race Course the first weekend of November. And with scarcely an exception, 18 of Japan's best middle-distance horses–with formlines from all over the world–are set to face the starter.

A logical case can be made for perhaps as many as nine runners Sunday afternoon, including reigning Horse of the Year Efforia (Jpn) (Epiphaneia {Jpn}), who looks to bounce back from a lacklustre ninth as the $1.50 (1-2) favourite when making his 4-year-old debut in the G1 Osaka Hai at this venue back in April. In finishing four lengths adrift of the upset-minded Potager (Jpn) (Deep Impact {Jpn}), the Carrot Farm colourbearer was suffering the second defeat of his career, the first coming when pipped by this year's G1 Longines Dubai Sheema Classic hero Shahryar (Jpn) (Deep Impact {Jpn}) in the 2021 G1 Tokyo Yushun. Blinkers go on and his latest fast work–with the new equipment–made something of a statement.

“His preparation has gone well, and he's probably in better shape than he was for his last race,” said trainer Yuichi Shikato. “He has been more switched on wearing blinkers in training, and running in between two other horses. It was too bad about his last race, so I want to see the real Efforia this time, and hope that he can show what a talented horse he is and give his best showing in the race.”

They weren't happy with him last week, blinkers on first time and he reverted back to raging bull mode

Leaving votegetter Titleholder (Jpn) (Duramente {Jpn}) (by a shade less than 3000 votes over Efforia) made all when winning last year's G1 Kikuka Sho (Japanese St Leger) by five lengths and, since finishing fifth to Efforia in the G1 Arima Kinen in December, led throughout to win the G2 Nikkei Sho (2500m) in March and the 3200-metre G1 Tenno Sho (Spring) May 1, where he had the talented G2 Qatar Prix Foy hero Deep Bond (Jpn) (Kizuna {Jpn}) some seven lengths behind in second. Titleholder's pint-sized older half-sister Melody Lane (Jpn) (Orfevre {Jpn}) is one of three females in Sunday's test.

Smooth as silk work, fit and ready to rumble.

Two graduates of this year's Dubai World Cup program could make things tough up front for Titleholder. Authority (Jpn) (Orfevre {Jpn}) was one of four winners for Christophe Lemaire on Saudi Cup night when leading them a merry chase in the G3 Neom Turf Cup over an extended 10 furlongs and set the pace in the Sheema before being overhauled late by Shahryar and the fast-finishing Yibir (GB) (Dubawi {Ire}). Panthalassa (Jpn) (Lord Kanaloa {Jpn}) took his rivals past every pole to annex the G2 Nakayama Kinen (1800m) by 2 1/2 lengths Feb. 27 and most recently shared the spoils with Lord North (Ire) (Dubawi {Ire}) in the G1 Dubai Turf. The 5-year-old is a bit of a question mark at Hanshin and over this distance.

Stay Foolish (Jpn) (Stay Gold {Jpn}) is another with imposing Middle East form, having accounted for Sonnyboyliston (Ire) (Power {GB}) in the G3 Longines Red Sea Cup in Riyadh in February before repeating the dose–albeit from slightly off the speed–in the G2 Dubai Gold Cup at Meydan Mar. 26.

Also not without a chance are the consistent Hishi Iguazu (Jpn) (Heart's Cry {Jpn}), second to Loves Only You (Jpn) (Deep Impact {Jpn}) in December's G1 Longines Hong Kong Cup and a running-on fourth in the Osaka Hai; and 2020 Filly Triple Crown heroine Daring Tact (Jpn) (Epiphaneia {Jpn}), who was a respectable sixth to multiple champion Sodashi (Jpn) (Kurofune) first off a 15-month absence in last month's G1 Victoria Mile.