All Pletcher in Pegasus Turf as Colonel Liam Defends Title 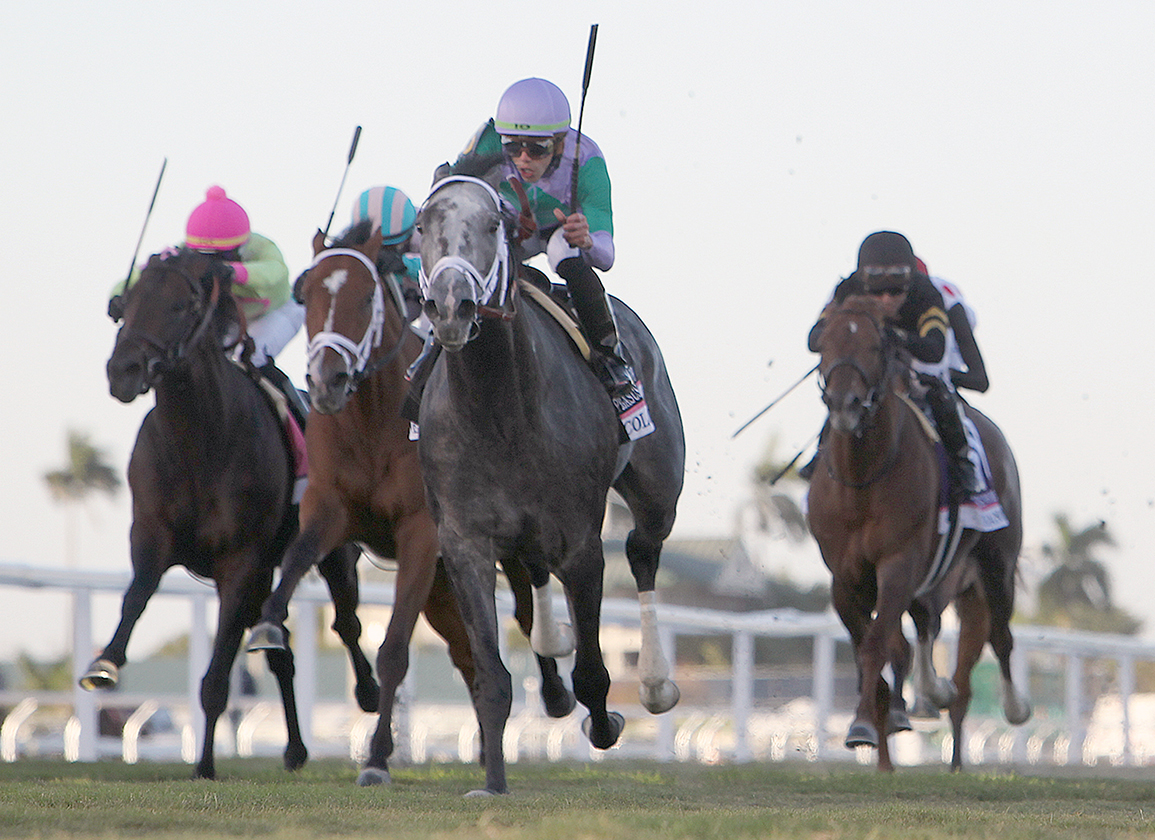 HALLANDALE BEACH, FL–Heading into this year's GI Pegasus World Cup Turf Invitational S., defending champ Colonel Liam (Liam's Map) was clearly the one to beat despite coming back off a 239-day layoff. The Robert and Lawana Low runner once again proved he was all class when coming from off the pace to best stablemate Never Surprised (Constitution) in Gulfstream's marquee test on the turf.

While best known for his dirt runners, trainer Todd Pletcher once again showed he not only knows how to prepare top turf runners, but also underscored the influence of his former top-shelf trainees who have gone on to stamp themselves as stallions, including Colonel Liam's sire Liam's Map and Constitution, sire of Never Surprised.

Colonel Liam broke well and was eased into a stalking fourth as stablemate Never Surprised rushed to the front from post 12 to set an opening quarter in :25.43. Still drafting between rivals through a slightly swifter half in :49.39, the grey began to make a move for the front through following three quarters in 1:13.31. Narrowly behind last-out Tropical Park Derby winner Never Surprised straightening for home, Colonel Liam surged ahead midstretch and shook clear late to best his barnmate by a length. Space Traveller (GB) (Bated Breath {GB}), far out of it in the early going, closed with purpose up the inside to finish a neck back in third.

“He didn't lose a step,” said winning rider Irad Ortiz Jr., who also took the day's feature of the day, the GI Pegasus World Cup Invitational with Life Is Good. “He's healthy and he's strong. He did everything right. I asked him a little early and when I asked him to go, he just went on.”

Added Pletcher of the race favorite, “I was actually pleased with how well he was traveling early on. You could see he got in a good position and had a lot of horse. He moved to Never Surprised early and kept finding more, and Never Surprised dug in. It was great race for both horses.”

As for the race setup, Pletcher explained, “It unfolded the way we expected it to. It looked like the fractions were reasonable. Colonel Liam was traveling really well in behind. You could see he was going well. Irad kind of went after Never Surprised in the middle of the turn and both horses fought on gamely. I'm proud of Never Surprised. He fought back.”

Colonel Liam, a $50,000 KEESEP yearling that flourished in a $1.2-million OBSAPR juvenile, won three of five starts in 2020, including a victory in Gulfstream's Tropical Park Derby. The grey kicked off his 4-year-old campaign with a neck win over stablemate Largent (Into Mischief) in last year's Pegasus Turf before following up with a confident score in the GII Muniz Memorial Classic S. at the Fair Grounds in March. He made it four straight with a dead-heat win with Domestic Spending (GB) (Kingman {GB}) in the nine-furlong GI Old Forester Bourbon Turf Turf Classic S. in May. Given plenty of support at 7-2 in his most recent start in the GI Resorts World Casino Manhattan S. in June, he faded to finish a well-beaten eighth. He had eight works since arriving in South Florida for his return.

“You just hope you've done enough with him. He has talent,” Pletcher said. “We need everything to go exactly as planned. We didn't have time for a prep race. We put all of our chips in this race. I'm glad it worked out.”

Pedigree Notes:
When Colonel Liam won this race last year, it was his first graded win, but he was the third Grade I winner for his young sire. Saturday, a more accomplished Colonel Liam was capturing his third career Grade I event, while Liam's Map has since added another GISW to make it four for his sire career and has also added three more graded winners in the past year for a total of seven. Overall, Liam's Map has had 13 black-type winners in his three crops to race thus far. Two of those Grade I winners–Colonel Liam and 'TDN Rising Star' Wicked Whisper–are out of Bernardini mares. The late Bernardini, who died last year at 18, has 61 stakes winners out of his daughters.

A $1.2-million OBS 2-year-old in 2019 after working a quarter in :20 4/5, Colonel Liam is one of two winners out of his unraced dam, whose 2-year-old Arrogate colt was a $70,000 RNA at Keeneland September. Amazement has a yearling colt by Copper Bullet and was bred back to Liam's Map. She is out of MGISW Wonder Again, who raced for the Phillips family of Darby Dan.

Darby Dan has a long association with Colonel Liam's family, going all the way back to his seventh dam. Darby Dan's founder, John Galbreath, entered into a partnership on 13 broodmares–one of which was the 1947 French-bred mare Skylarking II (Mirza {Fr})–with Prince Aly Khan, then purchased her outright when the Prince was killed in a car accident. Her daughter, Soaring (Swaps), became a foundation mare for Darby Dan and is Colonel Liam's sixth dam. Generations of Darby Dan principals bred each of Colonel Liam's first six dams, as well as Colonel Liam himself.