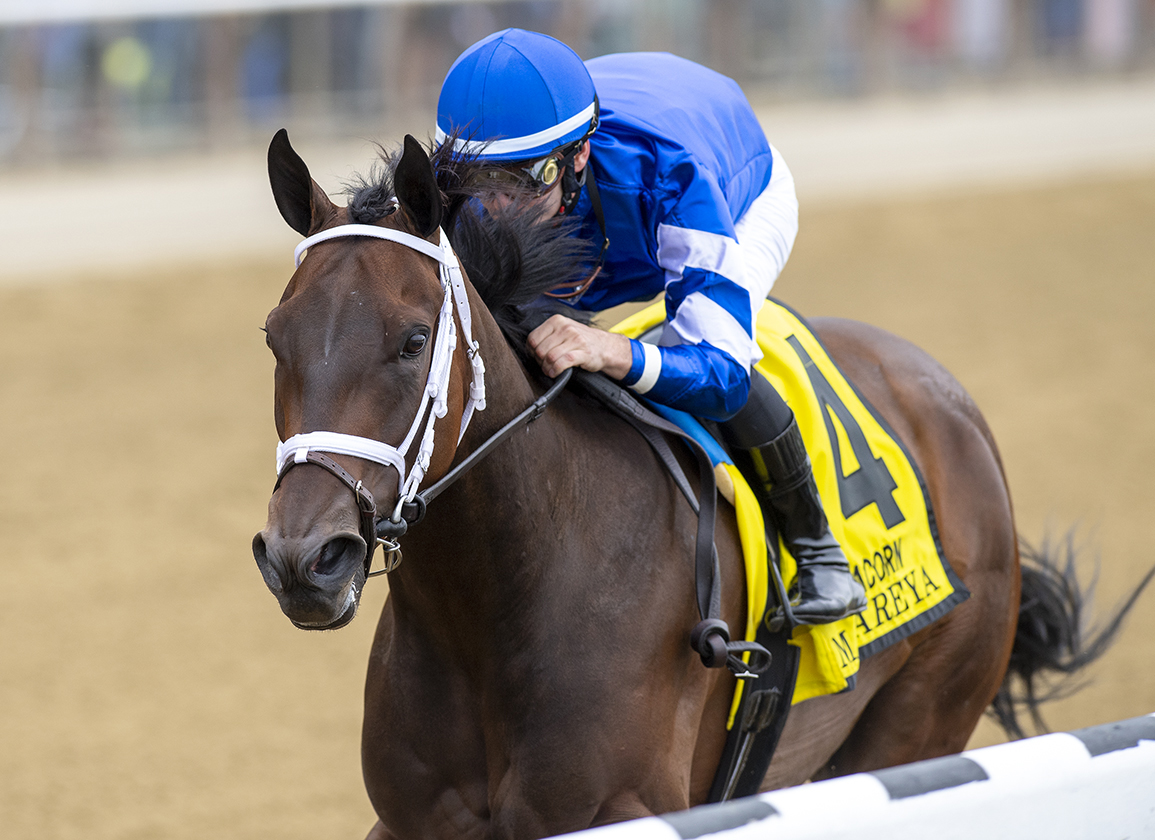 Matareya broke like a shot beneath Flavien Prat and led through an opening quarter in an easy :23.39. In cruise control and increasing her advantage as the quartet hit the quarter pole, Matareya was hand ridden down the stretch to stay perfect in four starts in 2022. It was 6 1/4 lengths back to Divine Huntress (Divining Rod) in second; Dream Lith (Medaglia d'Oro) was third.

After airing first out at Ellis last August, her juvenile campaign also included a dead-heat fifth-place finish in last fall's GI Darley Alcibiades S. at Keeneland and a second-place finish in the Fern Creek S. at Churchill Downs Nov. 27.

“It was unfortunate what happened right before the race with the scratch [of Echo Zulu], and a little unusual, but Matareya handled it all and ran her race,” said winning trainer Brad Cox, also responsible for brilliant 2018 Acorn winner Monomoy Girl. “She ran great and we're really proud of her. I was a little concerned running her back in this spot so soon after the Eight Belles, but she was doing so great we decided to come here and she rose to the occasion.”

The GI Longines Test S. at Saratoga Aug. 6 will be next.

“It took a little while to warm up,” Rosario said. “She looked a little bit off and they decided to scratch her.”

Dr. Anthony Verderosa, Director of NYRA Veterinarians, added, “The filly was lame in her left front.”

Matareya becomes the fourth Grade I winner for her late sire Pioneerof the Nile. This is the 15th Grade I winner for broodmare sire Bernardini and one of two on the day along with GI Ogden Phipps S. heroine Clairiere (Curlin). Matareya's Grade III-winning dam is a daughter of Golden Velvet, who was stakes-placed in France before adding a pair of graded victories and a runner-up effort in the 2008 Phipps. Golden Velvet is a daughter of Harbor View Farm's outstanding turfer Caress, who was purchased by John Ferguson on behalf of Sheikh Mohammed's operation for $3.1 million at the 2000 Keeneland November Sale a handful of months after the mare foaled a Pulpit colt. That offspring, Sky Mesa ($750,000 KEESEP yearling), was raced by John Oxley to a victory in the GI Hopeful S. Caress is also the dam of Velvety (Bernardini), whose son Maxfield (Street Sense) closed out his career victoriously in the GI Clark H. and now stands at Darley at Jonabell. Innovative Idea is the dam of the unraced 2-year-old filly Methodology (Uncle Mo), a yearling colt by the same stallion and visited him once again last season.