All in the Family with Stonestreet's Oaks Fillies 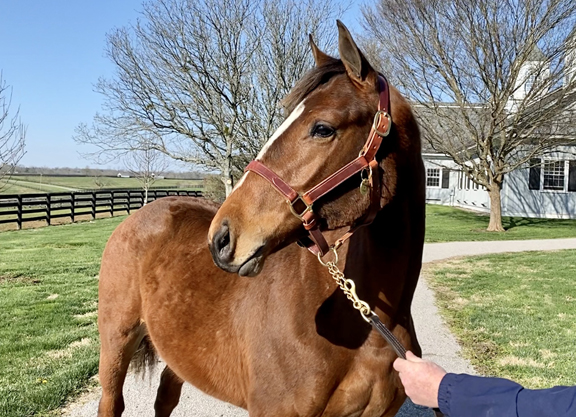 This filly is a full sister to one of three Stonestreet-bred Kentucky Oaks hopefuls. Read on to find out more.

Barbara Banke has a lofty goal heading into this year's GI Kentucky Oaks.

“I would love for there to be a Stonestreet trifecta,” she said. “That would be my dream.”

It sounds like quite the feat, but a trio of sophomore fillies foaled and raised at Stonestreet Farm are shaking out to be some of the strongest contenders expected to be vying for the garland of stargazer lilies on the last Friday of April.

What's Stonestreet's secret to molding such a potentially-historic state of affairs?

“It's pretty simple,” the farm's owner explained. “We take super speedy mares and we breed them to great stallions, and then we raise them right.”

That formula is fulfilled in all three of the Oaks-bound fillies as each is out of a Grade I winner that was once raced by Stonestreet connections.

“All three of the broodmares were really, really fast,” Banke said. “We raced them and saw what they could do, and then we treated them like horses. They're rough and tough and we raise their babies the same way. They stay outside and they spend their early years running around in paddocks and behaving like normal horses. So we think we have all the ingredients to have really spectacular foals that can eventually bear that out on the track.”

One of the top choices going into the Oaks, Clairiere is the first foal out of Stonestreet's three-time Grade I winner Cavorting (Bernardini).

“Cavorting was very rambunctious,” she recalled. “When we bought her, she leaped out of the trailer and we thought she was dead. She was down on the ground, but she got up eventually and went on to the farm where she leaped out of her paddock. Eventually we had to put her in her own paddock earlier than most fillies because she was very bossy. But, she was a great racehorse. She won going short. She won going long. She did everything.”

It wasn't until the summer of Cavorting's 4-year-old season, when she had already racked in five stakes victories including the 2015 GI Test S., when trainer Kiaran McLaughlin decided to stretch her out past a mile in the GI Ogden Phipps S.

“We didn't expect her to win because she had never gone long before,” Banke admitted.

But of course she did win, and she backed that victory with a second over a 1 1/8 miles in the GI Personal Ensign S. in her career finale.

Cavorting was initially bred to a second multi-million-dollar earner for Stonestreet in their flagbearing sire Curlin. When the bay filly arrived, Banke said she knew early on that the youngster would grow to be something special.

“Clairiere was a beautiful foal,” she recalled. “She's of course by Curlin, who is my  favorite sire of all time. She's like many Curlins where she was good, but she gets better and better as she goes forward into her 3-year-old year and hopefully 4-year-old year and beyond.”

A debut winner last October, Clairiere has since gone head-to-head with another top Oaks contender, Travel Column (Frosted), in each of her three graded starts, besting her rival by a neck with a come-from-behind performance in the GII Rachel Alexandra S. for trainer Steve Asmussen.

Banke said it was a full-circle moment for the connections to get the win in a race honoring their Hall of Fame mare.

“It was fabulous when she won the Rachel Alexandra,” Banke said. “She really put it together and managed to make her Curlin-esque move at the end. She's going to be a really good horse in the Oaks and I think she'll just continue to improve as the year goes on.” 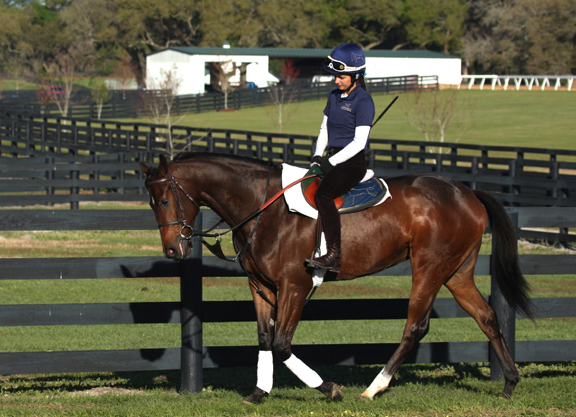 Banke reported that Cavorting has checked in foal to Into Mischief this year, but in the meantime, it won't be long to wait before her second daughter, named La Crete, makes it to the starting gate.

“Clairere is named for a spectacular Pinot noir vineyard that I have in Oregon and La Crete is her 2-year-old half-sister by Medaglia d'Oro,” Banke explained. “La Crete is another spectacular Pinot noir vineyard in Oregon, so we're keeping it all in the family, so to speak. She's at our training center and she's doing well. She's strong- I think maybe even a little stronger earlier than Clairiere.”

Purchased as a juvenile for $435,000 in 2009, Hot Dixie Chick was the first colorbearer for Banke's Grace Stable. Fulfilling the ownership's acronym of 'Girls Rule and Competently Endure,' the daughter of GSW Above Perfection (In Excess {Ire}) ran in the money in each of her seven career starts, earning her most notable win in the 2009 GI Spinaway S.

“Hot Dixie Chick was the most mellow racehorse of all time,” Banke recalled. “She would fall asleep in the saddling paddock and then go out and break the track record. She was fun to watch and she has gone on to produce great babies for us.”

In the spring of Always Dreaming's sophomore campaign, Hot Dixie Chick was bred to champion sire Tapit, a mating that produced the current Oaks hopeful.

“Pauline's Pearl is a beautiful Tapit filly,” Banke said of the subsequent foal. “When she went to the training center, we thought she was one of our best for the year and she has developed over time.”

It took some patience from trainer Steve Asmussen to get all the pieces to fall into place for Pauline's Pearl, but by her third start she made it to the winner's circle and next gave a runner-up effort in the GIII Honeybee S. before taking the GIII Fantasy S.

“She was a little bit behind in terms of racing experience, but she's making up for it fast,” Banke said. “She's named for my mother and every time we name a horse after my mother, it's a graded stakes winner.”

Banke reported that Hot Dixie Chick produced a full brother to Union Jackson that is now a juvenile in training at Keeneland with Steve Asmussen and this February, she foaled a colt by up-and-coming young sire Constitution.

“He's quite fast and very agile,” Banke said of the youngster. “He's really going to be something special, I think, so he's one to keep an eye open for later in life.”

While Malathaat, the third Stonestreet-bred Oaks hopeful, races under a different ownership banner, she is the only one of the three to come from a Stonestreet homebred.

Dreaming of Julia (A. P. Indy) was the first foal out of dual Grade I winner Dream Rush (Wild Rush) and was named after Banke's daughter. She was undefeated in her first three starts at two, including the GI Frizette S., but Banke said that the race she most frequently looks back on was the Todd Pletcher trainee's 21 3/4-length victory in the GII Gulfstream Park Oaks.

“She was just so much better than anything else that day,” Banke said. “She was favored in the Kentucky Oaks but then she got creamed coming out of the gate so she lost all chance of winning, but still managed to get up for fourth.”

Malathaat's full sister will be staying home from the sales this year, Banke reports. | Katie Ritz

When Dreaming of Julia produced her third foal, it was decided that the Curlin filly would go through the auction ring. As a yearling, she sold for $1.05 million to Shadwell Stable at the 2019 Keeneland September Sale.

Later named Malathaat, the 'TDN Rising Star' is now undefeated in four starts, most recently taking the GI Ashland S. by a head for the same trainer who oversaw her dam's career.

So why was this the filly Stonestreet decided to take to market?

“You know, we have to sell some; we cannot race them all,” Banke said with a laugh. “We have about 80 babies each year so there's no way we can keep everything. She was one where we said, she's spectacular but we do need to bring in the revenue this year, so she was on the list to sell. But I'm excited to see what she will do and while I was sad to hear that Sheik Hamdan [owner, Shadwell Farm] had passed away, I hope his family can enjoy watching her.”

Banke said she is fairly confident they won't be selling other daughters of Dreaming of Julia any time soon.

“Dreaming of Julia actually had a few that have died, so I'm glad to see Malathaat doing so well,” she said. “Malathaat may be the last one we ever sell from that mare because she really has nice babies and we're looking forward to great things from her in the future.”

Malathaat's yearling full sister is one that Banke said she will definitely be holding onto.

“She looks like a queen and she moves really well,” Banke said. “She will be staying home from the sale, but I'm glad to show her off because she is really something.”

Another sister, this one by Medaglia d'Oro, was foaled earlier this month.

“She already looks spectacular to me,” Banke said of the new filly. “I've loved that sire ever since Rachel Alexandra and I'm really hoping for great things for her, but I'm going to have to wait a few years to see it come to fruition.”

This year, Dreaming of Julia is expected to go back to Curlin. 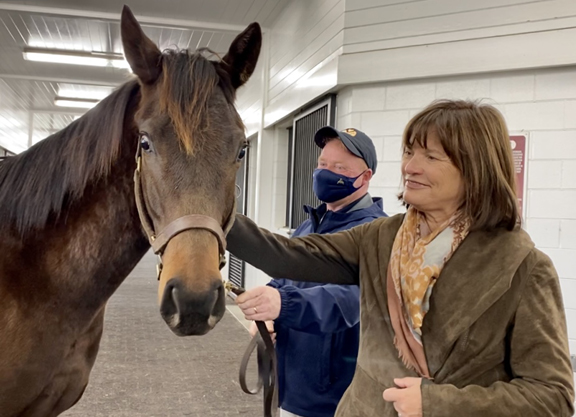 This Quality Road half-brother to Midnight Bourbon could one day become the fifth graded stakes winner out of Catch the Moon. | Katie Ritz

The 2008 Horse of the Year has potential for a monumental year at stud if he were to earn his first win as a sire in either the GI Kentucky Derby or the GI Kentucky Oaks. Two of his sons, GI Florida Derby winner Known Agenda and recent GIII Stonestreet Lexington S. victor King Fury both have points on the road to the Kentucky Derby, while Malathaat and Clairiere are among five daughters of Curlin with points on the Kentucky Oaks leaderboard.

To top off everything else that the farm has going for itself heading into Derby weekend, Stonestreet will also be represented by a colt in the Kentucky Derby. Midnight Bourbon (Tiznow) was bred and raised at Stonestreet before selling to Winchell Thoroughbreds as a yearling for $525,000.

Stonestreet purchased his dam, Catch the Moon (Malibu Moon), at the 2015 Keeneland November Sale for $240,000 in foal to Shanghai Bobby. The resulting foal, named Pirate's Punch, went on to become a Grade III winner.

“This is a mare who has had four graded stakes winners in her first four foals,” Banke said. “So you can't beat her as a broodmare. Midnight Bourbon is a beautiful horse and he's by Tiznow, so that would be exciting if he does well because we need that sire line in Kentucky.”

Catch the Moon had a Curlin colt sell for $500,000 at last year's Keeneland September Sale and she also has a yearling Quality Road colt and a Curlin colt, foaled this February, in the pipeline.