All Eyes on Unbeaten Yaupon in Chick Lang 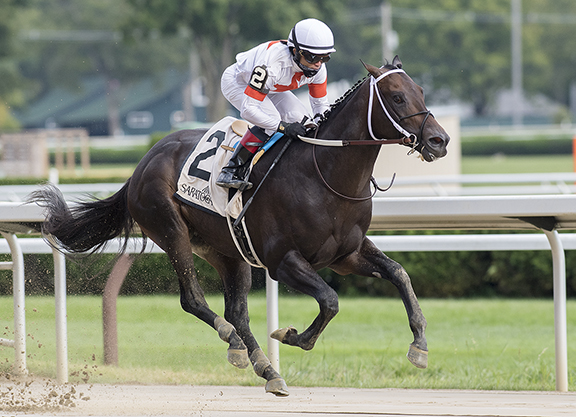 Despite losing the ultra-talented GISW Volatile (Violence) to an untimely injury in late September, the Hall of Fame Steve Asmussen barn still has another big bullet to fire in the sprint division in the form of the up-and-coming unbeaten sophomore Yaupon (Uncle Mo) in Thursday's GIII Chick Lang S. at Pimlico.

The L. William and Corinne Heiligbrodt colorbearer, a $255,000 OBS June acquisition (:10), made it a perfect three-for-three in front-running fashion while making his stakes debut in Saratoga's GII Amsterdam S. last time Aug. 29.

The Chick Lang 4-5 morning-line favorite has earned triple digit Beyer Speed Figures in each of his last two starts.

“He's extremely fast,” Asmussen said. “He's got an elite amount of speed. We wanted to give him all the maturity we could. We were trying to follow a similar plan with him as we were with [champion sprinter and 2018 Chick Lang winner] Mitole for the Heiligbrodts.”

Yaupon's main foe of his nine rivals entered may be drawn right to his outside in post 10. Arkaan (Into Mischief), a sharp winner of his first two starts, including a runaway allowance tally at Delaware July 27, cuts back in distance after setting the pace and collecting third behind GI Preakness S. runner and 'TDN Rising Star' Pneumatic (Uncle Mo) in Monmouth's TVG.com Pegasus S. Aug. 15.