All Eyes On Sodashi In Champions Cup 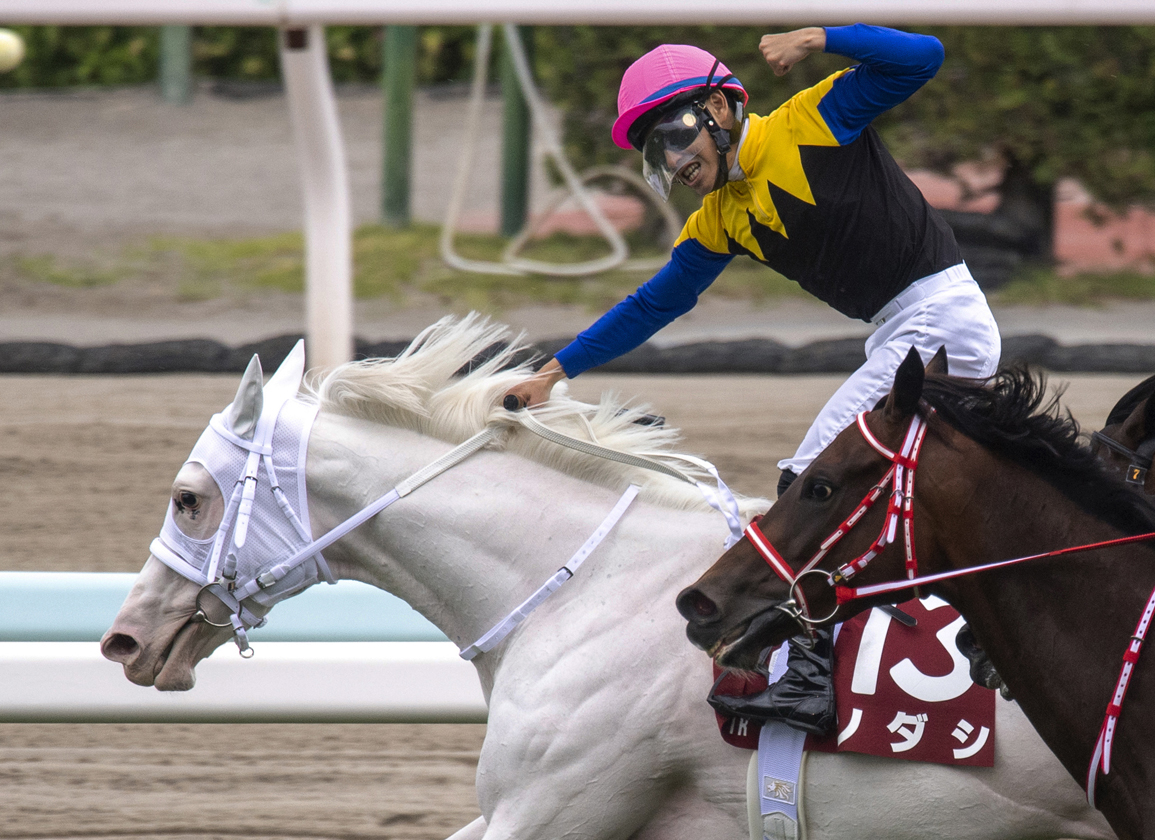 The world's best-known–not to mention most-talented–white Thoroughbred, Sodashi (Jpn) (Kurofune) gets a different sort of test when she tries the dirt for the first time in Sunday's G1 Champions Cup (ex Japan Cup Dirt) at Chukyo Racecourse, a race won in scintillating fashion by her sire 20 years ago.

Named the champion of her generation when capping a perfect freshman campaign in the G1 Hanshin Juvenile Fillies last December, Sodashi resumed with a victory in the G1 Oka Sho (Japanese 1000 Guineas) over the metric mile Apr. 11, but did not see out the 12 furlongs of the G1 Yushun Himba (Japanese Oaks) May 23, finishing eighth to Uberleben (Jpn) (Gold Ship {Jpn}). Given a break, Sodashi defeated history-maker Loves Only You (Jpn) (Deep Impact {Jpn}) in the Aug. 23 G2 Sapporo Kinen (2000mT), but weakened to 10th after racing prominently as the odds-on favourite in the G1 Shuka Sho (2000mT) Oct. 17.

In addition to her sire's dirt exploits, her equally popular dam Buchiko (Jpn) (King Kamehameha {Jpn}) was a four-time winner on the main track and is a half-sister to Yukichan (Jpn) (Kurofune), a three-time stakes winner on the dirt.

“On her pedigree, it looks like she'll be able to perform on dirt, and in her training uphill she's been running well and posting good times,” said trainer Naosuke Sugai of the rail-drawn Sodashi. “I think she's well prepared for her first run on dirt over 1800 metres. I hope she can be well forward and not use up too much, too soon.”

Chuwa Wizard (Jpn) (King Kamehameha {Jpn}) rallied from midfield to scoop this valuable prize last year before venturing abroad to be ninth in the Feb. 20 Saudi Cup and runner-up in the G1 Dubai World Cup the following month. Sixth to T O Keynes (Jpn) (Sinister Minister) in the Listed Teio Sho at Ohi in June, the 6-year-old prepped for this with a sound third–with T O Keynes fourth–in the Listed JBC Classic at Kanazawa Nov. 3.

American Pharoah is represented by a pair of runners, each drawn awkwardly. Danon Pharaoh (Jpn) has gate 14 and made the Listed Diolite Kinen in March his one success from four runs this term. He exits a seventh after racing handy to the pace in the JBC Classic. Drawn widest of the 16 is Cafe Pharoah, a low-odds sixth behind Chuwa Wizard last December after winning this track's G3 Sirius S., and who took out this year's G1 February S. at Tokyo. But has generally struggled over the NAR tracks and was fifth to Casino Fountain (Jpn) (Casino Drive) in the Listed Kashiwa Kinen at Funabashi in May, and is best forgiven for a ninth-place effort when trying the grass for the first time in the G3 Hakodate Kinen in July. The 4-year-old makes his first start since.

The relatively lightly raced Sunrise Hope (Jpn) (Majestic Warrior) has risen through the grades this term and is understandably well in the market off his last-out success in the Sirius S. Oct. 2.