All Eyes On Dennis' Moment in Fountain of Youth 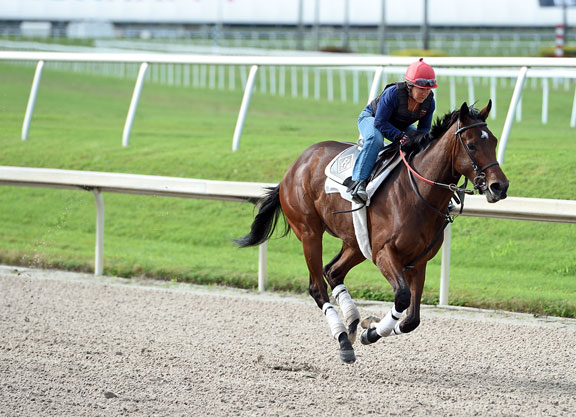 For only having raced four times thus far, Albaugh Family Stables' Dennis' Moment (Tiznow) has already had a roller coaster's worth of twists and turns in his career. Two brilliant victories paired with two disastrous starts in his 2-year-old season have established dichotomous perceptions of the imposing bay colt. Saturday at Gulfstream Park, he will get a chance to solidify himself as a top contender for the GI Kentucky Derby when making his highly-anticipated 3-year-old debut as a likely heavy favorite in the GII Fasig-Tipton Fountain of Youth S.

Unveiled last June in a five-furlong event at Churchill, the $400,000 Fasig-Tipton Saratoga buy was heavily touted pre-race by trainer Dale Romans, but clipped heels and threw rider Robby Albarado in the opening furlong before finishing impressively on his own to be side by side with the winner at the wire. Returning to the barn unscathed, he gave it another go in a seven-panel maiden July 27 at Ellis and lived up to his conditioner's billing, running away to a devastating 19 1/4-length romp, more than enough to earn his 'TDN Rising Star' badge.

Validating that performance with an easy and professional victory when stretched out to two turns in the GIII Iroquois S. Sept. 14 in Louisville, Dennis' Moment appeared to be all systems go for the GI TVG Breeders' Cup Juvenile and was accordingly installed as a 9-10 favorite by the bettors. But again, bad luck ended his race nearly before it started, as he stumbled terribly at the break and trailed throughout, ultimately hitting the wire 21 1/4 lengths adrift of upset victor and eventual champion Storm the Court (Court Vision). Shipped to Gulfstream early in the year, he has drilled steadily and swiftly for his return, most recently going an easy half-mile in :48 flat (14/91) Feb. 23. Flavien Prat is in for the pickup mount with regular rider Irad Ortiz, Jr. overseas to ride Mucho Gusto (Mucho Macho Man) in the Saudi Cup.

“I'm feeling a lot of pressure. I'm not usually in this situation where I feel pressure. I usually like being the underdog because there's not much pressure,” Romans told the Gulfstream notes team. “This horse, there's so much hype with him–well deserved, he's very talented. I put the pressure on myself because of what I think of him. I think he's ready to roll.”

Romans and Dennis' Moment were the beneficiaries of a favorable draw, being placed in the five-hole when pills were pulled Wednesday morning, while their main rivals were marooned on the outside. Getting the worst of it was Shooting Star Thoroughbreds' Chance It (Currency Swap) in the 12 post. Powerfully capturing the Florida Sire Dr. Fager S. and In Reality S. here as a juvenile, he stepped into open company for the first time in the Mucho Macho Man S. Jan. 4 and delivered, gamely prevailing over the re-opposing As Seen On Tv (Lookin At Lucky) by a head while earning a career-high 99 Beyer.

Not much better off after the draw is Ete Indien (Summer Front) in the 11-hole. Racing over turf twice to begin his career, the $80,000 Keeneland September buy scored at 14-1 in a local optional claimer in his dirt debut Dec. 20 and proved that was no fluke when finishing a good second to top Derby prospect Tiz the Law (Constitution) in the GIII Holy Bull S. here Feb. 1. One stall inside of him is the only graded stakes winner in the field save Dennis' Moment, Shotski (Blame). A second-out graduate sprinting at Laurel, the $25,000 Fasig-Tipton October pickup was fourth in the Street Sense S. before going wire to wire in the GII Remsen S. Dec. 7 at Aqueduct. He was last seen running second as the favorite in the GIII Withers S. Feb. 1.