Ageless Channel Maker Back at Belmont in Joe Hirsch 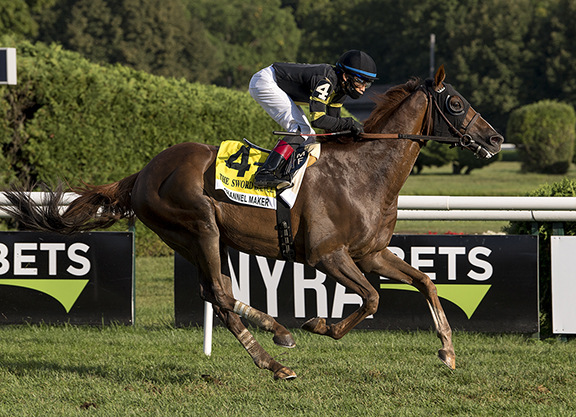 Seemingly written off last time out as a declining 8-year-old gelding, Channel Maker (English Channel) caught everyone napping with a dominant wire-to-wire score in the GI Sword Dancer S. over soft turf. Saturday, the chestnut will return to the scene of his previous two Grade I triumphs in the GI Joe Hirsch Turf Classic Invitational S. at Belmont.

Capturing the 2018 Turf Classic in similar fashion–wire to wire over soft turf–Channel Maker was out of the trifecta in his next three tries, but rebounded with a determined victory in the local GI Man O' War S. last May. Just missing by a half-length four starts later in the 2019 renewal of this event, he was no better than fourth in six subsequent outings, but got beaten just a length at 23-1 in the GI Manhattan S. here July 4. Elevated to third via disqualification after getting steadied late in the GII Bowling Green S. Aug. 1 at the Spa, he blitzed to the lead and never looked back in a 5 3/4-length conquest of the Sword Dancer at 8-1 Aug. 29.

GIven a slight nod on the morning line at 2-1 is Rockemperor (Ire) (Holy Roman Emperor {Ire}). A fast-closing third in the local GI Belmont Derby in his U.S. debut last July after being brought over from France, the bay has come close but is still winless in six Stateside starts. Sixth in the Saratoga Derby in his 3-year-old finale, he was third in the GII Muniz Memorial Classic S. at Fair Grounds and GII Charlie Whittingham S. before finishing a neck short of stablemate Instilled Regard (Arch) when second in the Manhattan. He closed mildly to be third last out in the GI Old Forester Bourbon Turf Classic S. Sept. 5 at Churchill.

A pair of horses making their respective North American debuts add spice to the lineup. Master Piece (Chi) (Mastercraftsman {Ire}) took five tries to break his maiden in his native land, but reeled off four straight victories once he did, culminating with a score in the G2 Gran Clasico Coronacion. Third in the G1 El Derby Feb. 2 at Valparaiso, the gray was last seen finishing 14th in the G1 Gran Premio Latinoamericano Mar. 14 at San Isidro in Argentina.

Laccario (Ger) (Scalo {GB}) ships across the Atlantic for three-time German champion trainer Andreas Wohler. Second by a head on debut, the dark bay scored four straight successes, punctuating the streak with a triumph in the G1 IDEE Deutsches Derby last July at Hamburg. A well-beaten third in Baden-Baden's G1 Longines Grosser Preis von Baden, he bounced back as a nose runner-up in the G3 Preis der Deutschen Einheit at Hoppegarten before checking in seventh making his 4-year-old debut over yielding turf in the G1 Preis von Europa Aug. 15 at Cologne.