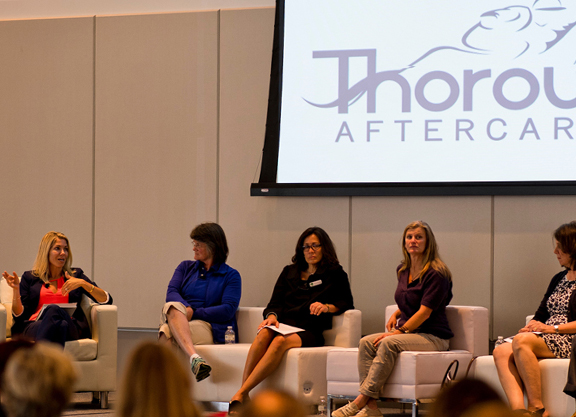 Equestricon, the first all-encompassing horse racing convention held this earlier this month in Saratoga, made a point to highlight the importance of Thoroughbred aftercare during its two-day run. Now, its official charity partner, the Thoroughbred Aftercare Alliance (TAA), is already experiencing dividends from the exposure.

The aftercare of racehorses remains a critical talking point both in the sport and to the general public. Equestricon embraced that fact by hosting multiple panels on the subject, having a world-renowned keynote speaker discuss her experiences with off-the-track Thoroughbreds, and featuring the TAA prominently in the exhibit hall with its Aftercare Hub.

“It has given us momentum,” said Stacie Clark, the TAA's operations consultant. “We received some donations, and it was also good for us in our current networking situation. I think it made the TAA a more current conversation in the industry at large across the country right now. It became a big thing outside of Kentucky, which is important.”

The convention kicked off with an aftercare keynote address from Soledad O'Brien, who has spent more than 25 years in the media. She became a household name as an anchor on both CNN and NBC, and in 2013, she started her own company, Starfish Media Group. Additionally, she has had a lifelong passion for horses.

As a child O'Brien mucked stalls in return for riding lessons. Now, she owns two off-the-track Thoroughbreds, although she is the first to admit she wasn't sure a Thoroughbred was the right breed for her.

“I became involved in aftercare because I live near Akindale Thoroughbred Rescue,” said O'Brien. “When I was thinking seriously about getting my own horse some 30 years after I started my lessons, it was suggested I take a look at retired racehorses. I thought that might be the most insane suggestion as ever. I am a mediocre to okay-ish mom rider. Who would tell me to go look at a Thoroughbred racehorse? ”

Akindale, in Pawling, N.Y., is one of 64 organizations accredited by the TAA. O'Brien worked with the rescue to find the right horse, and now horses, for her and her family.

“I thought I knew Thoroughbreds,” said O'Brien. “Now, I often now encourage people to think about Thoroughbred rescue if they are thinking about a horse already.”

After telling her own story, O'Brien moderated a panel entitled “OTTB Success Stories” and then later, Gulfstream Park's Acacia Courtney moderated the “Aftercare Pathways” panel. Both panels were presented by the TAA, and a number of the participants were affiliated with TAA accredited organizations.

The first panel aimed to profile specific equines who demonstrate the value of retraining racehorses once they are ready for a new career, while the second focused on the various ways horses can be put to use or cared for once their racing days are done.

“There's no question there has been a huge wave on the topic, but there have been a lot of owners and trainers all along who have taken care of their horses with no fanfare required,” said trainer Rick Violette, who is the president of the New York Thoroughbred Horsemen's Association and served as one of the panelists. “That wasn't good enough. A pivotal moment was after Eight Belles in 2008. That fall, there was a congressional hearing, and all the major players were at the hearing. The question Rep. Whitfield asked at the end from everybody was 'What are you doing for your retired horses?' It was frankly very embarrassing because we weren't doing a unified, good job. However, if we are invited back, there is a great story to tell now. Everybody has rallied and is taking this very, very seriously.”

Beyond preparing for a life in the show ring or as a trail horse, different groups showed how Thoroughbreds can and are being used for a wide variety of things. These different paths ranged from helping to rehabilitate prisoners to serving as therapy for children with Autism and also included ground-breaking scientific research from Columbia University on how horses can help treat PTSD in veterans.

That research is part of the Man O' War project, which was founded by racehorse owner Earl Mack and aims to make the first ever standardized manual for treating veterans through equine therapy.

“This is a wonderful venue, and it is certainly a great achievement of the Thoroughbred Aftercare Alliance that we are all here,” said Mack during Equestricon. “I think people will be fascinated by some of the work that is going on to save the animals that are near and dear to us.”

In addition to creating a platform for the cause at large, it also built a sense of community among those who are at the forefront of taking care of racehorses after their time at the track is over.

Between the various events, 18 of the TAA's accredited organizations were represented in person, which facilitated an exchanging of ideas, an understanding of the different ways the organizations function, and a platform to discuss the versatility of the Thoroughbred.

The value of being together in one place was so apparent during Equestricon that the TAA is already planning on a future gathering for its accredited organizations.

“Next year, the Hall of Fame is going to let us have an event, a small-networking situation, for our organizations to get together,” said Clark. “I think that is big. Moving forward, Equestricon has opened a lot of doors for us with other entities in the racing industry, and it has broken down some of the barriers of competition between the organizations. We are all in this together.”